Luke Clippinger and Mary Washington for House of Delegates 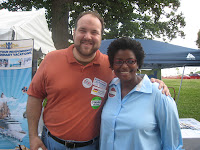 The City of Baltimore, the State of Maryland and the LGBT community would be best served if candidates Luke Clippinger and Mary Washington are elected to the House of Delegates. As progressive Democrats in Baltimore City, winning the primary on September 14 would almost certainly mean election in November.

Mary Washington, an Associate Director at an urban environmental education organization, is making her 2nd attempt for Delegate in the 43rd District. Included in that district are Charles Village, Waverly, Guilford, Morgan Heights, Lauraville, Montebello and Govans.

Both candidates are attractive, personable, engaging, competent and hard working. They have demonstrated to this newspaper their integrity as well as their willingness to roll up their sleeves to meet their constituents at every turn to explain their positions on safety, education, jobs and the environment.

The added bonus, of course, is that both Luke Clippinger and Mary Washington happen to be gay. Drawing from their personal experiences, they would bring to Annapolis first-hand knowledge and understanding of lgbt issues. Both are competing in districts that boast a significant LGBT population, so these constituents would be well represented.

The friendships, trust, and working relationships both Clippinger and Washington would generate among their colleagues would enable legislators to see gay individuals on a personal level, which could perhaps move them to be allies and support our initiatives. There remains much work to do in Annapolis with the two highest LGBT legislative priorities being marriage equality and transgender protections. Luke Clippinger and Mary Washington can only help give these initiatives a boost.

Both candidates have received endorsements from the Gay and Lesbian Victory Fund, Equality Maryland and the Stonewall Democrats of Central Maryland as well as other groups and organizations. They can now count Baltimore OUTloud as among those who strongly urge the citizens of Districts 46 and 43 to vote for Luke Clippinger and Mary Washington, respectively, on September 14.

Posted by Steve Charing at 8:43 AM