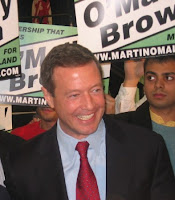 The historic ruling by U.S. District Court Judge Vaughn Walker that struck down Proposition 8 on constitutional grounds sent a seismic reaction that has spread to Maryland. Aside from the extreme fringes who bemoan the decision because Judge Vaughn is gay and, therefore, biased (a red herring if there ever was one), the decision had been met quite favorably by media, pundits and most importantly, folks across the U.S.A.

The point is, Governor, same-sex civil marriage is inevitable in the Free State, and it would behoove you to be on the right side of history. To heighten the chances for re-election, you should declare your support for marriage equality during this campaign, and I will explain why.

You are embroiled in, what many believe to be, a very tight election battle. Your re-election is no cinch, to say the least. You are facing mounting voter discontent for a variety of reasons, placing incumbents like yourself in a perilous position. Moreover, this is an off-year election, which, as you know, historically brings lower voter participation. There is no exciting candidate like Barack Obama to drive turnout. Because of this, voter enthusiasm, monetary support, and, yes, turnout, particularly among your base supporters, are crucial.

A significant part of your base is the lesbian, gay, bisexual and transgender community. But please keep in mind that what impacts the LGBT community also radiates to others: family members, co-workers, friends and neighbors as well as like-minded allies who believe in equality for gays and lesbians. The numbers among these groups are far greater than what you may ordinarily assume if taking into account only the lgbt population.

In this off-year election with its likely reduced voter turnout, enthusiasm within this group will be needed to help achieve your goal. Right now, the LGBT community is not enthusiastic about you primarily for your stance on same-sex marriage.

While it is true that our community is not enamored with the record of your opponent Robert L. Ehrlich, Jr. concerning LGBT equality, that shouldn't be a signal that the community would automatically vote for you. As I mentioned previously, enthusiasm is key. That translates into donating and raising funds, working on the ground, and voting. Without that passion, your struggle for re-election magnifies. They may not vote for Ehrlich; they may simply stay home.

Deep down, I know you favor equality and non-discrimination for all Marylanders including the lgbt community. You have demonstrated that as Mayor of Baltimore, which was greatly appreciated. Our community supported you in droves in 2006 and is looking for a reason to do so again in 2010. But simply being the anti-Ehrlich will not suffice.

I realize the political calculus is different in a statewide election, but please consider these points:

1. Democrats in Maryland outnumber Republicans 2 to 1. Get the Democratic voters to the polls and you win.

2. Those voters who oppose marriage equality generally would not vote for you anyway. Governor, you'd be best served by concentrating on your base of support and the persuadable center of the political spectrum and not waste time and resources trying to change the minds of the right wing.

3. Your continued support for civil unions satisfies nobody. The folks who oppose marriage equality will not vote for you even if you advocate for civil unions. And progressive supporters are turned off by a separate but equal solution to the issue.

4. Attorney General, Douglas Gansler, in issuing his legal opinion that recognized the valid marriages of same-sex couples conducted in other jurisdictions, has been a forthright and a strong backer of marriage equality. The consequence of his unambiguous support: no one is opposing him for his re-election.

5. A Washington Post poll conducted in May indicated for the first time that more registered voters in the state favor same-sex marriage than oppose.

The default position of being cautious during this particular election campaign has an immense downside, but a courageous stand on marriage equality has a huge upside. You can easily announce that after reading Judge Walker's 193-page opinion that as Governor you do not see a state's interest in discriminating against gays and lesbians here. You want all citizens of Maryland protected under the law, specifically, the Equal Protection clause of the Fourteenth Amendment. And I am certain you wouldn't want a family member to be treated as a second class citizen any more than you would want to see the rest of the state's population victimized by discrimination.

Governor, you demonstrated a tremendous amount of zeal in your quest to repeal the death penalty. I ask that you show a similar degree of passion in standing up for same-sex marriage. State emphatically that you have seen the light; that the ruling in California provided you with a new perspective. Let Mr. Ehrlich try to fight you on the issue of fairness and equality versus discrimination. Let him keep his extreme conservative votes. That's a battle you should welcome in a state with a huge Democratic margin and a populace trending towards marriage equality.

It is the right thing to do, and with the expected rising enthusiasm among your base as a result, it will likely help you get re-elected.

Posted by Steve Charing at 9:32 AM