Cruise on the Oasis Had Baltimore Feel 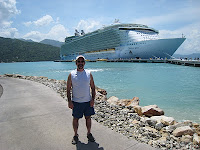 When Cruise Planners and Baltimore OUTloud assembled a group of a couple of dozen to sail on Royal Caribbean's Oasis of the Seas—the largest cruise ship in the world—we all thought we'd be leaving Charm City behind for a week beginning September 18. And there were reasons to believe that. The ship had over 6,000 passengers representing 80 different countries plus an international cadre of over 3,000 crew and staff. The ship visited the ports-of-call in the Western Caribbean Labadee, a Royal Caribbean International-owned peninsula on Haiti; Costa Maya and Cozumel—both in Mexico. None of these resembled Baltimore.

And yet, it did not take too long to find out that Baltimore was a recurring theme. First off, the event was arranged by Glen Burnie-based Cruise Planners (www.BelleCruises.com, 410-760-1589) who brought together gay and straight passengers including OUTloud's Leather columnist Rodney and his partner Steve. Cruise Planners booked our rooms and dining preferences, held a tour of the ship and hosted a couple of cocktail parties for the group.

There was the fabulous production of Hairspray—a theatrical marvel that is set in Baltimore and is based on Baltimore's own John Waters original movie. As an aside, the talented cast, staging and costuming were Broadway caliber. Special kudos go to the leads Tara Siesaner as Tracy, who possesses an amazing voice and hot looking Tommaso Antico, who played the male lead, Link Larkin. Link, if you remember, is a character that the girls drooled over (and so did some of the boys).

Not only did Antico offer a solid dose of eye candy, but he also is an extraordinary dancer and vocalist in his own right. Moreover, he played in the touring production of Hairspray when it visited Baltimore's Hippodrome Theatre a couple of years ago.

Another theatrical extravaganza, Come Fly With Me, was simply breath-taking.

Then there was one of the two stand-up comics on board, Baltimore's own Rodney Johnson. He was hilarious as he focused his act on the inadvertent comedic behavior of the passengers. Trust me, there was enough material to cover a 4-hour set. The other comic, Al Romas, who was a little raunchier but quite effective as he parodied relationships, particularly married couples.

And if that wasn't enough Baltimore, the headliner act was native Baltimorean and veteran performer Tony Tillman. Tillman in a musical and comedy show kept the mood upbeat with his sparkling personality and singing talent. The climax occurred at the end when he paid tribute to his old hero and friend, Sammy Davis, Jr. with a moving rendition of the classic Mr. Bojangles.

Although this is classified as a "straight cruise," (which is different from the Atlantis or RSVP all gay, all-the-time adventures), there are a lot of opportunities for our LGBT friends. For one thing, Royal Caribbean is extremely gay-friendly, and a good portion of the crew is over the rainbow.

That leads me to the "Friends of Dorothy" get togethers. That code phrase is used, as it was pre-Stonewall, to identify as gay without explicitly saying so. A Community Bulletin Board, not unlike OUTloud's, is posted in the Guest Relations area where events, meetings and socials are announced. Someone arranged for "Friends of Dorothy" to meet every midnight at the Champagne Bar.

From there our group doubled in size as folks from Boston to Wichita and from New Orleans to Michigan as well as the U.K. gathered to make new friends and hang out and even dance together on the ship's Disco floor. I am assuming the moniker "Friends of Dorothy" is still being used to prevent would-be "critics" of the LGBT community from disrupting the pleasantries.

Being on a cruise ship this size seemed like living in a gigantic shopping mall/hotel and restaurant complex/playground on water. This mega-ship had its own Central Park, an ice-skating rink, a carousel, rock climbing wall, basketball courts, miniature golf, several swimming pools and spas, a complete gym, a two-story theatre, an Aquatheater where an amazing diving and acrobatic show took place, an entertainment area, a promenade, a Zip Line, Flow Rider surf simulators, numerous specialty restaurants plus its lavish dining rooms, night clubs and, of course, a casino with slots and table games. There is always something going on and you can choose to do whatever you want or simply do nothing.

The Oasis of the Seas is in its inaugural season. A twin ship, Allure of the Seas, will be ready to set sail in December.

A good time was had by all if one can judge by the smiles on people's faces. With all that distance traveled we still felt Baltimore in our presence. You can't get homesick that way.

Wonderful work! That is the type of info that are supposed to be shared around the net.
Disgrace on the search engines for no longer positioning this submit upper!
Come on over and talk over with my website .
Thanks =)
My site - Phone Therapy