Halloween or the Nov. 2 Elections—Which is Scarier? 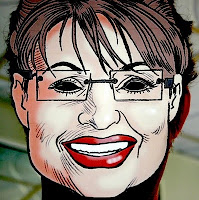 Sharron Angle, one of the darlings of the tea party movement and who is running as the Republican challenger against Democratic Senator Harry Reid in Nevada, has professed some interesting ideas. And as we approach Halloween and the general election a couple of days afterwards, these are scary ideas.

Angle, according to the AP, deemed "a BP fund of oil spill victims a 'slush fund;' suggesting tea party followers will resort to 'Second Amendment remedies' if Washington is not reformed; concluding that unemployment benefits have 'spoiled our citizenry;' and blasting Democrats for pushing public benefits to 'make government our God.'”

She has advocated the end of Social Security although her views have "moderated" to simply "transitioning out" Social Security, because her campaign has been subject to greater scrutiny.

Angle opposes abortion in all circumstances, including rape and incest. She is virulently anti-immigration, and clearly opposes most of the key LGBT issues, such as repeal of Don't Ask, Don't Tell (though she doesn't understand the process in the Congress) and same-sex marriage.

Even possessing what one would ordinarily characterize as an extreme right-wing ideology, Angle is actually ahead in the polls against the Senate Majority leader. She has a good chance of winning.

And so do other like-minded tea party-backed candidates for Congress—all Republicans. In some places they will surely lose. In others they will certainly win. The New York Times argued that regardless of the outcome of the November 2 elections, the tea party movement will enjoy broad influence in the Republican Party that will pull it further to the right as a result of the inevitable battle of ideology wages on.

This is profoundly scarier than any Halloween—especially if you are part of the LGBT community or an ally.

The GOP, for reasons that continue to escape me, is poised to regain control of the House of Representatives and even worse but less likely, the U.S. Senate. They want to make this election about President Obama; after all he stopped a sure depression, saved a million jobs that would have been lost had he not pushed for a bailout of major automobile manufacturing companies, and restructured health care that has been pronounced by independent economists as deficit neutral.

Until his refusal to use his authority to finally crush the nefarious Don't Ask, Don't Tell policy when a California judge opened that door, I had been a big supporter of the President. But his presidency—at least his first term—was doomed from the start when radio blowhard Rush Limbaugh emerged from his addiction problems to pray that the President and his policies should fail. This lends new meaning to the word patriotism from a man who had prides himself as a patriot.

When the Republican opposition had been relatively quiet at the outset of Obama's term, Rush gave them voice. They lined up behind this jackass and found their footing. The "birthers" re-emerged. You know, they are the ones who still feel Hawaii is a foreign country and the President is not a U.S. citizen. Then he has been accused of being a Muslim, forgetting their own demagoguery during the 2008 campaign against Obama's association with the Christian preacher, Reverend Jeremiah Wright.

This is what we are facing if the predictions of November 2 come true. A country that will be led in part by the likes of Queen of the Tea Party, Sarah Palin (at least through her own brand of demagoguery), Michelle Bachman, and perhaps Sharron Angle, Rand Paul and others of their ilk.

Say good-bye to the repeal of DADT. Despite Sen. Mitch McConnell's supposed willingness to allow the vote to once again take place following the elections, don't bet on a favorable outcome. Not if the sore-loser-in-chief Sen. John McCain has his way. The continued reckless discrimination against gay and lesbian service members will continue unabated despite 70 percent of the country and all of the top military brass favoring repeal.

Say good-bye to the Employment Non-Discrimination Act or ENDA, which had its best chance in the first term of President Obama, but that window shut in a hurry. The 30-year attempt to end discrimination in the workplace will continue to languish.

And for sure, say good-bye to any opportunity for repealing the Federal Defense of Marriage Act or DOMA. It really didn't have much of a chance to begin with but at least a dialogue and perhaps hearings may have started during Obama's second term (if there is to be one) and Democrats somehow remain in the majority.

Locally, we have squandered the past four years with a liberal Democratic governor and a huge majority of Democrats in the legislature. No same-sex marriage bill ever saw the light of day outside a committee. No transgender or gender identity protection bill was allowed to head to the floor for a debate and vote.

The upcoming election will unlikely result in any significant shift in the legislature, but the fight for governor is still up in the air with turnout in a two-to-one Democratic advantage in the state to be the key factor. Should Mr. Ehrlich prevail, the next four years will go as the previous eight—no tangible progress, no matter how many legislators sign their name to a pro-LGBT bill.

Yes, Halloween, especially for children could be scary yet fun. Whatever frightening costumes, pranks and tricks that are a part of the tradition will only last a day or night.

But with the upcoming election, the results could prove even scarier, the pranks are on us, and they will last for years to come.

Posted by Steve Charing at 1:19 PM