Punting Equality to the People 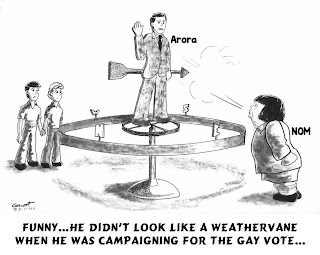 Following questioning by reporters on March 2, Governor Martin O’Malley received plaudits from Equality Maryland folks and other marriage equality advocates for his urging the House of Delegates to get on with the Civil Marriage Protection Bill (“Religious Freedom” was unfortunately dropped from the title in the final Senate version). After the hemming and hawing by several delegates, who were co-sponsors no less, the Governor seemed to have had enough of this issue, which unlike in previous years is dominating the 2011 General Assembly.

"I hope the House comes together and passes this bill," O'Malley said.

A perfect time it was for the Governor to show some leadership on the controversial measure, who up until now has been reluctant to get out in front of the cameras to actually advocate for passage. Better late than never, I suppose. So three cheers for Governor O’Malley!

But moments later, O’Malley, who had pledged to sign the bill into law if voted by the legislature, acknowledged that even if the General Assembly approves the bill, voters will likely decide its fate because it can be petitioned to a referendum that would appear on the 2012 ballot. "We should let the people decide," he said. Ouch!

One respected Equality Maryland board member, upon learning of the added comment wrote on Facebook, “He always finds a way to disappoint.”

And O’Malley is not alone in his idea that the people should decide. Senate President Thomas V. Mike Miller, an opponent of marriage for same-sex couples or even civil unions for that matter, cleared the way for a debate and vote in the Senate by constructing the crucial Judicial Proceedings Committee (JPR) in such a way that there were sufficient supporters of the measure to vote it out of committee and onto the floor. He even pledged to end a filibuster but would vote against the bill.

Why would Miller allow the bill—one to which he is firmly opposed—to finally see the light of day? He could have easily stacked the JPR with opponents to kill it once again. Some speculate that the time is right for Maryland to finally deal with the issue once and for all.

Miller had been accused of encouraging the JPR to keep the bill from moving to the floor because he does not like another contentious issue to have to be debated. More likely he reasoned that since the Governor said he would support the measure the legislature may as well take up the issue and as O’Malley said, leave it up to the people to decide.

Wavering delegates on the House Judiciary Committee have indicated, as of this writing, they would eventually vote for the bill and ultimately on the floor. The slim 12-10 victory in the committee on March 4 that enabled the full House to consider the bill came after several lawmakers backtracked from their original co-sponsorship to a position where they had to give it more thought, pray, grandstand for legislation unrelated to the marriage bill or other reasons for not immediately committing to the bill.

Freshman Delegate Same Arora (D-Montgomery) had been aided in his election bid largely by LGBT activists and donors specifically for his pro-marriage equality stance. Then he held the committee vote up while he grappled with second thoughts and vigorous pressure from the likes of the Maryland Catholic Conference and the National Organization for Marriage. Arora endured intense pressure from his constituents who pointedly reminded him of his original position. [See Bruce Garrett's cartoon]

After he finally decided that he would vote for the measure, Arora said, “On the floor, I will vote to send the bill to the governor so that Marylanders can ultimately decide this issue at the polls. I think that is appropriate." In the end, Committee Chair, Joseph F. Vallario Jr., an opponent of marriage equality, cast the decisive 12th vote—not so much that he flip-flopped but because again, the people should decide.

I call that “punting.” This is where politicians do not want to take a courageous stand on a controversial issue and instead let others decide. Should the House go on to pass the bill and O’Malley signs it, the people through the referendum process will make their decision at the ballot box and the politicians will not have to bear the heat from constituents regardless of the outcome. Instead, they are supporting the horrendous notion that the rights of a minority should be at the mercy of the will of the majority.

Those opponents of marriage for same-sex couples who will have voted for the bill or those, such as Mike Miller who had eased the way for its consideration in the legislature, had done so because they believe that the referendum to overturn the law will be approved by the voters in 2012.

In the coming weeks, I will present the challenges of the referendum should the House of Delegates go on to approve the Civil Marriage Protection Act. I will outline what I believe will be the reasons why it is an uphill battle and also point out how we as a community can overcome those challenges.