The Time to Plan for a Referendum Battle is NOW 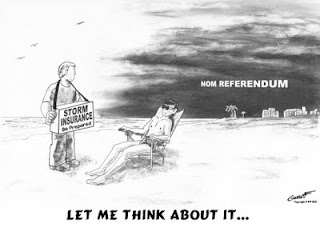 Following the victory on the marriage equality bill in the Senate during the 2011 Maryland General Assembly, I had asked a former official at Equality Maryland (not the executive director) if plans are afoot to combat a likely referendum should the marriage bill be signed into law. That person said that “we are focused on winning in the House, and we’ll worry about the referendum later.”

On the surface, that response seemed prudent. The legislative battle had yet to be won, and energy and resources must be dedicated to jumping that hurdle before you look further down the track. And with a potential ballot initiative taking place 19 months in the future, arguably there was time to mount a strong defense.

Unfortunately, the marriage bill fell short by only a few votes of victory in the House without an actual floor vote taken. On top of that, Equality Maryland, the principal group leading the legislative effort, essentially imploded in terms of organizational stability, finances, and to some extent, its reputation within the LGBT community.

Its board, which experienced multiple resignations following the session and had fired its executive director, is attempting to bounce back. But Equality Maryland will not be the vanguard for the marriage bill, as a new organization, Marylanders for Marriage Equality (MME), was launched in July.

Nor will Equality Maryland be the sole steward to secure protections on the basis of gender identity, as that effort is being headed by Gender Rights Maryland. That bill could also face a referendum attempt.

The fledgling MME is a coalition of organizations who will renew the fight in the legislature. It is comprised of Progressive Maryland, 1199 SEIU, ACLU, Human Rights Campaign (HRC), National Gay and Lesbian Task Force as well as Equality Maryland.

While it appears that Equality Maryland never got down to the nitty-gritty of mapping out a specific strategy to raise funds and plan for a possible referendum skirmish in 2012, there was hope that MME would. “The coalition is looking at the big picture to bring marriage equality to Maryland,” said Kevin Nix, who works for HRC and is the media spokesman for MME. “Our priority in the short term is passing a bill through the legislature.”

OK, apparently it’s back to Equality Maryland’s position earlier this year in that MME will not put the cart before the horse and instead focus on getting the bill through both chambers. Governor O’Malley promised to sign it and actively campaign for it as part of his legislative package.

If signed into law, one can rightly assume the opposition will garner the required number of signatures, regardless of the method, and the issue—“Should marriage only be between a man and a woman?”—will be offered to the voters. And with the next General Assembly ending in April 2012, there is precious little time to organize, raise funds, and execute a winning strategy to thwart the inevitable referendum come November.

Accordingly, the time to plan for such an eventuality is now—not after the bill is signed and the predictable celebrations fade away.

The main focus of the plan should be to bring in money—lots of it—and in a down economy to boot. Just to raise funds to counter the advertisements by opponents in the high-priced media markets of Baltimore and Washington will be daunting in itself. The need for printed materials, phone banking and other related expenses will cost a bundle as well.

There will be a plethora of well-funded, well-organized groups from within Maryland and throughout the U.S. who will be highly motivated to ensure that marriage equality does not see the light of day in Maryland. This opposition is formidable and will include but not limited to the National Organization for Marriage (NOM), the Catholic Archdiocese, Focus on the Family, the American Family Association, the Mormon Church and the mega-churches in predominantly African-American areas of Baltimore City and Prince George’s County.

To illustrate the challenge, NOM alone spent $1.8 million in support of Proposition 8 in 2008. The next year in Maine, NOM was the majority contributor to the anti-equality Stand for Marriage Maine with $1.6 million geared towards Question 1. Overall, in 2009, NOM’s total expenditures were roughly $7.5 million.

The task becomes even more exigent as a full-blown, all-out education campaign is required, especially among African-Americans and Catholics. With President Obama on the 2012 ticket, turnout among blacks is expected to be high. This is particularly significant in Maryland with its high proportion of African-Americans (nearly 30 percent). And according to the Public Religion Research Institute, 2 out of 3 African-American Protestants oppose marriage for same-sex couples.

Older citizens tend to be socially conservative, and as a group, they are more apt to vote. Moreover, the Dream Act referendum will also be on the ballot drawing out many voters to defeat that law who are also likely to oppose same-sex marriage.

If the opposition succeeds, the law is dead, and it could take decades before politicians decide to overrule the “will of the people.”

For Marylanders for Marriage Equality it’s understandable to focus on winning the immediate battle in the legislature. But it will be useless if we lose the war. To win the war we have to match our opponents dollar for dollar and then some.