OMG! Toby’s Legally Blonde is Totally in the Pink 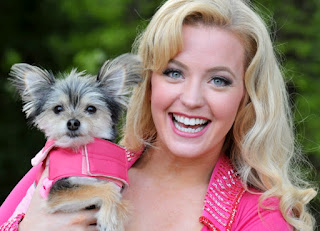 Never mind that you may not be apt to hum the melodies from Legally Blonde the Musical as you exit the theater.  Ignore the fact that the content defies modern social consciousness and plays on a multitude of stereotypes: ditsy blondes, shallow sorority girls, trailer park folks, blood-thirsty lawyers, gays, lesbians, and even UPS delivery men.  Forget that the plot is improbable at its core.  But with Legally Blonde the Musical, currently playing at Toby’s Dinner Theatre of Columbia you will be hard pressed to experience more fun over a span of two and a half hours.
From the rousing, high energy number “Omigod You Guys” performed by a spunky, talented ensemble that kicked off the show to the very last scene, Legally Blond will have you hootin’ and hollerin’ throughout.  While the melodies composed by Laurence O’Keefe and Neil Benjamin in this romantic comedy aren’t always tuneful, that minor deficiency is more than made up by the clever and hilarious lyrics that the duo penned as well as the book by Heather Hach that tell the story of a stereotypical airhead blonde sorority sister who stays true to herself and follows her dreams.

Can't wait to see this! Also, I agree about "There, Right There!" being hilarious (saw the Broadway production). I read in an article that the show's creative team changed the name from "Gay or European" to "There, Right There!" because the audience would read the songlist in the program and already know the joke before the song appeared in the show. They found in previews they weren't getting big laughs from it, but when they made the topic of the song a mystery, it got major laughs!

Thank you so much for the nice review! Just a small correction - the UPS Guy Kyle was played by Adam Grabau, not Jordan Andre!

You weren't totally humming/singing "Omigod You guys" when you left?? :-p I was.