A Charming Little 'Miracle at Toby's

Right on cue for the holidays, Toby’s the Dinner Theatre of Columbia is presenting Miracle on 34th Street—not the black and white classic Christmas  movie from 1947 shown every December on television but a live, sweet musical adaptation in living color.  Miracle on 34th Street, whose book, music and lyrics were penned by Meredith Willson of The Music Man and The Unsinkable Molly Brown fame, debuted on Broadway in 1963 under the title Here’s Love.
No one will confuse the music in Miracle with the richness of the score in The Music Man or even recent productions at Toby’s, such as Les Mis and Fiddler as few of the numbers in this one are memorable, save for “It’s Beginning to Look Like Christmas,” a holiday favorite.  But the strength of Miracle on 34th Street and the reason people should buy tickets the sooner the better rests with its charming and tender family-oriented storyline and the outstanding performances by the cast as well as the work of creative team under the guidance of Director Shawn Kettering and Musical Director Douglas Lawler.


The holiday atmospherics are certainly in place: Scenic Designer David A. Hopkins constructed a nice Christmas-themed set with trees all around on walls and other fine touches added to the ambience.  He employs several small video screens on the side of the theater to show black and white footage of a Thanksgiving parade to coincide with the live action of the show-opening parade on stage.  It worked well. The sleigh on wheels that Santa occupies is gorgeous.  And it wouldn’t be a Christmas show without snow.
Set in New York City before and after Thanksgiving in the late 1940s, the story focuses on a white-bearded man named Kris Kringle (played superbly by Robert Biedermann125) who claims to be the real Santa Claus.  He brings about a genuine “Miracle on 34th Street,” spreading good cheer and good will among men throughout New York City, encouraging camaraderie between the arch-rival department stores Macy’s and Gimbel’s, and convincing a divorced, cynical single mother, Doris Walker (Heather Marie Beck), her daughter Susan Walker (played on the night the show was reviewed by the too-cute-for-words Ella Boodin) that Santa Claus is no myth. 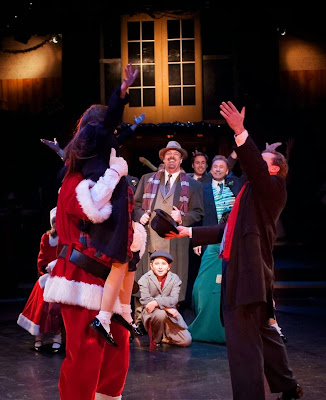 Skeptics saw otherwise, and poor Kris Kringle had to appear before a stern Judge (very well played by David Bosley-Reynolds) at a hearing in New York State Supreme Court to determine if he should be committed.
As these events unfold, Doris finds her neighbor Fred Gaily (Jeffrey Shankle) an ex-Marine and inexperienced lawyer who develops a father-daughter bond with Susan, falls for Doris and eventually represents Kris Kringle at the hearing, leading to a lovely conclusion.
Mr. Shankle clearly brought his “A-game” to this production.  In terrific tuneful voice, he performs “My Wish,” with Ms. Beck and is simply stellar in his solo “Look, Little Girl.”  The veteran actor portrays his role flawlessly and with ease, turning in a wonderful performance.

﻿﻿Garnering the best ovation of the night was young Ella Boodin as Susan who alternates with Sadie Herman during the run.  Never missing a line, never missing a cue, never missing a note or a step, adorable Ella,(who played young Cosette in Toby’s presentation of Les Misérables, showed the audience that she definitely has a bright future in musical theatre.


Not quite as young as Ella but always excellent is Toby’s mainstay Lawrence B. Munsey as R.H. Macy, the owner of the department store. Commanding on stage and with his strong baritone, Mr. Munsey excels in “That Man Over There”—a highlight number during the courtroom scene, which in itself, is a highlight in the show.
Mr. Munsey’s propensity to master his role in a Toby’s musical is consistent and reliable, but he also takes on other duties, such as costume designer and did so in Miracle.   Authentic 1940’s suits and dresses as well as Santa outfits were donned by the cast lending a realistic visual to this enchanting production.

﻿﻿﻿As Doris, Heather Marie Beck was suitably cast and delivered a pretty solid performance.  Her vocals were good in such numbers as “You Don’t Know” and “Love, Come Take Me Again.”


Veteran performer Robert John Biedermann 125 excels as Kris Kringle.  He adroitly exhibits the sweetness and kindness that all children believe Santa to be.  Everybody rooted for him.
Other notable cast members are Darren McDonnell as Marvin Shellhammer and Will Emory as Mr. Sawyer.  Also David James, David Little and Nick Lehan performed very well.


In fact, the entire ensemble including some little children chipped in with proficient singing, dancing and acting.  The number “Here’s Love” brought out some dexterous footwork under the direction of choreographer Mark Minnick. 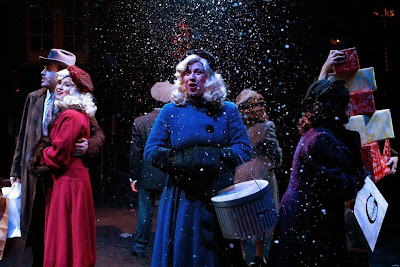 It is noteworthy that the charm of the production is representative in many of the elements that are true to the time period—from costumes to props including a 1940’s telephone.  On the other hand, there was no attempt to scrub the sexist language in the dialogue and song lyrics, such as the term “little girl” as conveyed to an adult woman.  Some in the audience were taken aback.


The myriad scene changes had to be executed swiftly especially in the in-the-round venue of Toby’s.  Most of the time it works but on occasion there is some overlapping between scenes, which could be a bit distracting.  But that is a minor quibble.
As stated earlier, the music does not leave one humming exiting the theater.  But the vocalists who performed them and Douglas Lawler’s six-piece orchestra (Mr. Lawler rotates with Pamela Wilt) backing them up does justice to the rather bland melodies.

Miracle on 34th Street is highly recommended.  Strong performances and attractive visuals plus a mighty charming story (and a great buffet) make this a seasonal must-see, which will be enjoyed by the young and the young at heart.
______________________

You're very right about the music; fairly forgettable. But Toby's always does a great job and their use of the space is very imaginative.

Joel Markowitz said...
This comment has been removed by a blog administrator.
2:08 PM