Homophobia before 'The Dance' 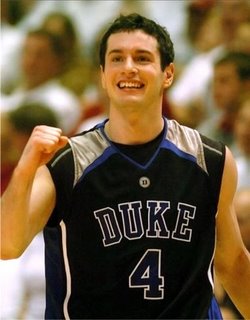 Duke’s J.J. Redick shrugs off fans’ taunts with class and courage
By Steve Charing
As the college basketball spectacle called "The Big Dance" winds its way through March and edges into early April, we are reminded that the darkness of homophobia in male athletics can cast a shadow over such a shining event. Prior to his fourth NCAA tournament, J.J. Redick, Duke University’s standout senior all-American guard, had been a frequent target of homophobic taunts and jeers while playing on the road.

Taunting isn’t a new phenomenon in the world of men’s college basketball by any stretch. Opposition arenas and gymnasiums have had a long history of being hell for visiting players. And if you don’t think the tactic of employing derisive chants, name-calling, and boos is effective, compare the home vs. road records of NCAA teams.

It seems that each venue has its own style of intimidating the visiting team’s players in some fashion. Locally the University of Maryland’s Comcast Centre, for one, is notorious for mocking the opposition. Sometimes the spirit goes too far as loud curse words are audible over national TV microphones and debris is sometimes launched at the visiting benches.

Most taunting, however, is usually accomplished through chants directed towards the targeted player’s personal physical characteristics (as Duke fans derided the supposed homeliness of former Maryland Terp Steve Blake), or as has been the case of Maryland’s D.J Strawberry in other arenas, his controversial father, Darryl Strawberry. Even a player’s family’s political leanings are in bounds it seems. Duke fans hurled catcalls at Maryland Terp Nik Caner-Medley by shouting that his parents are "Liberal!" Gasp!

Among the iniquitous forms of ridicule that are flung at a young visiting player, however, is his perceived sexual orientation. Again, this isn’t new. It doesn’t matter if a player is gay or not, fans know this is how to get inside his head. This is what J.J. Redick has been experiencing throughout his career.

Undaunted, Redick, who was born in Tennessee in June 1984 as Jonathan Clay Redick (his older twin sisters nicknamed him J.J.), has proven to be arguably one of the very best collegiate basketball players of all time and is a leading candidate for the National Player of the Year. He has amassed myriad offensive records for Duke, the Atlantic Coast Conference and the NCAA.

The 6-foot 4-inch senior is a prolific scorer with a deadly three-point shot and is virtually automatic from the foul line. (Alas, his Duke career ended earlier than expected during The Dance’s Sweet Sixteen.)

Because of his accomplishments and the Blue Devils’ perennial success, he is hated by opponents’ fans. It’s hard to comprehend why though. He is not a trash talker nor does he show up his opponents. He just plays to win.

No matter where he performed away from the friendly, cramped confines of Cameron Indoor Stadium, J.J. Redick had to endure a wide array of catcalls from the home team’s spectators. Some mocked the fact he loves to write poetry while others harassed him for being gay, or so they thought.

Outsports.com columnist Jim Buzinski pointed out how anti-gay taunts are intended to demean opponents. He mentioned a well-documented slur from NC State guard Scooter Sherrill last year that was aimed at Redick. " [Redick] has a little bit of cockiness to him," Sherrill said. Referring to the fact that the Duke star holds his hand in the follow-through position after making a shot while dropping back on defense, he said, "You see him hit a 3, and he's running down the court hollering. He's got his hand up like he's gay or something." He later half-heartedly apologized for the comment and admitted he was trying to agitate Redick.

For his part, Redick let it slide. "It's just the nature of sports," Redick told the Durham (NC) Herald-Sun. "Not just with me but with anybody—they're going to try to find ways to get an edge." It seems to motivate Redick more. Following the remarks, Redick outscored Sherrill 28-11 head-to-head, albeit in a losing effort.

This wasn’t an isolated homophobic incident in the chronicle of male college sports. According to a published article in the Daily Illini, the University of Hawaii changed the name and logo of its football team from the Rainbow Warriors to just the Warriors in 2000 because of the association with the gay rainbow flag. And the University of Southern California marching band reportedly taunted UCLA by playing the notes F, A and G in successive order at football games also as recently as 2000.

For J.J. Redick, the advent of "Brokeback Mountain" added more fuel to the fire. Opposing fans have been chanting "Brokeback Redick" or pasted his likeness on Brokeback posters and hoisted them up. The "gay cowboy" film had also prompted Gonzaga fans to tease opponents by chanting "Brokeback, Brokeback." School and team officials asked fans to cease the verbal homophobia.

In Redick’s case, it’s just another day at the office. Outsports.com co-founder Cyd Zeigler, Jr. gave Redick his props for at least addressing the issue when he could have simply ducked it. While noting Redick is most likely not gay, Zeigler comments, "It warmed my heart to hear a college basketball player, one of the nation's best this year, talk so openly about his sexual orientation being a topic of discussion."

He continued showing his poise in the midst of the NCAA’s Big Dance during an interview on Fox Sports’ "Best Damn Sports Show." Just a couple of days prior to the number one ranked Blue Devils’ shocking elimination that ended his collegiate career, Redick again owned up to his being jeered without hesitation.

Redick matter-of-factly acknowledged to the former jocks who were interviewing him, specifically Rob Dibble, the anti-gay slurs he received during the season. He courageously mentioned the Brokeback-themed chants, and did so with his engaging smile. He didn’t use the platform to gay-bash, or yuck it up about gays, which could have been a convenient strategy to help mitigate the taunts. Instead, he shrugged it off—no big deal.

It would have been ideal if Redick had taken the opportunity then to pronounce his heterosexuality but at the same time speak out against the homophobia that is so rampant among those who jeer. But it would have been hardly plausible in the macho culture of big time sports and probably a major distraction during the tournament.

What is unclear is J.J. Redick’s attitudes are towards gays and lesbians. A devout young man, he recently got a tattoo with the number 19 inscribed to denote Joshua 1:9, his favorite verse. It says, in part, "Be strong and of good courage; do not be afraid, nor be dismayed, for the Lord is with you wherever you go."

Clearly his faith helped him deal with the taunting so he was able to focus on his game performance. His inner character helped him discuss it with class and courage.
Posted by Steve Charing at 10:49 AM