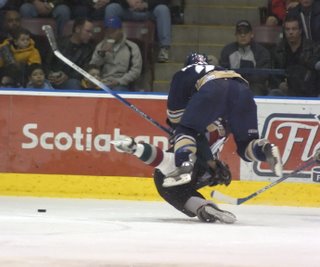 Why the NHL may be the first major league to embrace a gay male player
By Steve Charing
Philadelphia Flyers goon Donald Brashears perhaps said it best: "This game is gay now." Of course, his absurd comment was in response to penalties, a fine and suspension levied against him in response to a punching incident. But was his comment that farfetched? Could hockey be the first major male team sport that is, um, gay?

Other sports don’t seem to hold out immediate promise. We have heard the rumors and innuendoes (and wishful thinking), as well as the vehement denials concerning major league baseball players. Precious few have come out but only after their careers ended. The same could be said for pro football. And with public homophobic denunciations through the years by hoop players, it is more unlikely that one would come out in the NBA.

No active player possessing Jackie Robinson-like courage has stepped out onto the field of play in uniform as an openly gay man. No man thus far has been willing to battle the potential distractions, threats and shunning from teammates, opponents and fans to weather the storm.
For gay men, this has been a daunting barrier. The epitome of the macho culture in organized sports does not create a hospitable setting for an openly gay athlete. This paradigm needs to be broken, but where?

Why not hockey. Brashears already provided the opening. And with the Stanley Cup playoffs are on the horizon, a coming out story would add more spice to the sport that is still reeling from last year’s lockout. So, has anyone considered ice hockey as a fertile area for a gay man to come out?

You can be forgiven if you are shaking your head about now. After all, which sport is more macho than hockey, and which sport can boast more macho players? If you had ever seen Eric Lindros without a shirt you can swear the NHL oozes testosterone along the ice sheet.

Some of the hottest male athletes are hockey players if you discount those with more stitches than teeth and those whose noses resemble San Francisco’s Lombard Street.

But it’s not a stretch to suggest that hockey can handle an outwardly gay player. For one thing, look around the NHL and see where some of the franchises are located: Vancouver, San Jose (a spit away from San Francisco), Los Angeles, Sunrise (Miami-Ft. Lauderdale area), Tampa, Atlanta, Washington, DC, Philadelphia, Columbus, Minneapolis-St. Paul, Chicago, three in the New York area, Boston, Montreal and Toronto. Think of it: every one of these venues has a large, viable gay population and a fabulous gay scene. The gay fans would raise their sticks in jubilation if they had a gay hockey hero to worship.

These are happening cities, and they showcase hot ice skaters, albeit padded and helmeted, with long hard sticks in their hands banging each other against the boards and shouting. "Get the puck outta here!" Some even get called for "charging"—a gay retail habit. As for endorsements, what can be more appealing than a gay hockey player touting an Armani scarf in Boston? Or modeling Speedos in Sunrise?

Hockey, more than any of the "big four" professional sports, has an international flavor. To be sure, baseball is signing Asians and Latinos in increasing numbers, and basketball has ventured into the European and African continents to lure human high-rises to the league. But the NHL has the largest percentage of non-Americans playing. And this is a good thing, especially if a gay player chooses to come out.

Canadians and Swedes, for example, are far more progressive than Americans are when it comes to accepting gays. Several European countries (and Canada) have legalized same-sex marriage, and many have established equal rights for gays. All those who had been liberated form Russia, the Czech Republic, Slovakia and other Eastern European nations who play hockey in the NHL know all too well the shackles of oppression. It can extend to gay oppression. These players appreciate their newly found freedom. Only in America is there a hang-up when two men kiss as a greeting.

Moreover, hockey players are better equipped to withstand any possible harassment from coming out because they generally give as well as receive. Players of this ilk are not easily intimidated.

A recent Sports Illustrated poll indicates that hockey players are for more willing than their counterparts in the other major sports to embrace an openly gay teammate. Just about 80 percent of 346 surveyed said they would—nearly 20 percent higher than baseball players.
Assuming the poll is reliable, that’s a huge statement regarding the attitudes of hockey players.

Baseball, football, basketball—those sports have balls but the players don’t. At least not in coming out of the closet. Maybe in hockey the puck will stop here.
Posted by Steve Charing at 1:04 PM