Pride Shows Us the Distance Traveled

With most of the Pride celebrations throughout the world now in the rear view mirror, it is beyond amazing how far we have traveled down the road to equality.  Keep in mind there is so much unfinished business needing to be addressed throughout the U.S. and the world, but what has transpired over the 45 years since Stonewall should definitely put a smile on our faces. 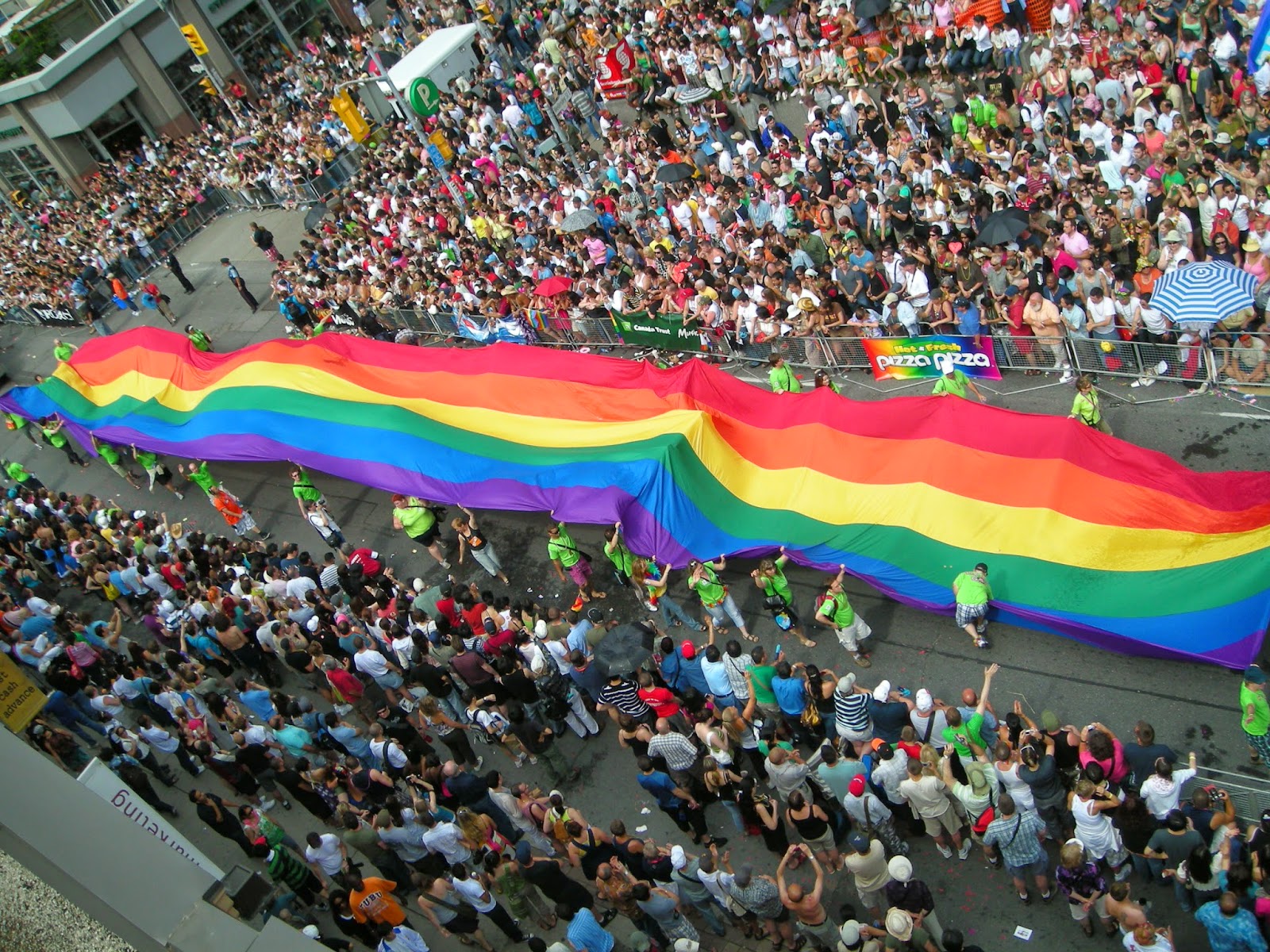 To put it in perspective, here is what the gay world looked like before Stonewall:
Frequent gay bar raids occurred with police demanding ID’s under the threat of arrest.  Entrapment by the police was astonishingly commonplace especially in what are called “cruising areas.”  So was blackmail.


Names of the arrested were published in the newspapers: Jobs lost.  Tenants evicted from apartments.  Families were torn apart.
Gays were beaten up by straights with alarming frequency.  Same-sex dancing was prohibited, as was touching.  Gay sex was criminal behavior.


You had Mafia-owned bars serving overpriced watered-down drinks whose owners often worked in collusion with the police and cared not one bit about the gays and lesbians who were their customers as long as they could make money off of them.  Bar bouncers roughed up drunken gays.
There were no laws on the books to protect against discrimination in employment, housing or public accommodations.


Gays and lesbians were banished from the military following extensive witch-hunts.
There were no domestic partner benefits or any rights based on same-sex relationships at major corporations and few universities.


There were no openly gay elected officials, and anyone in the public eye remained in the closet. No officeholder supported an end to the harassment, much less advocated for equality.  The thought of marriage between same-sex partners didn’t even exist.
A television show with a major gay character was unthinkable, as well as an openly gay actor.  Any gay characters portrayed in movies were either depressed, suicidal, flamboyant or a victim of some sort.   There were few, if any, gay-related periodicals.


Homosexuality was viewed as a psychological disorder; queers were considered sick and fair game by a hostile, homophobic society.
Most chose to remain in the closet.  Partners were introduced as “roommates.”  And because of family pressures, so many gays and lesbians were virtually forced to date or marry members of the opposite sex to deflect any suspicion of being gay.


The world then was hardly decorated with rainbow flags and pins.  For those of us who have experienced it, we know all too well how depressing and lonely it was.
When the first Pride took place in New York a year after Stonewall, it was all about trying to gain rights and not to be treated as second-class citizens.  There were speeches, signs and banners proclaiming liberation (or at least hoping for it).  There was no celebrating; it was a coming together of people who had suffered indignities and to demand changes.


Now fast-forward to today and just think of how much has changed.  Without going into the myriad significant achievements, particularly over the past 10 years, all one needs to do is to take a look at Pride 2014 here and elsewhere, and it will be mind boggling.
Today, Pride has mirrored LGBT acceptance to the point that politicians are falling over each other to be seen in a Pride parade.  Candidates at all levels proudly march with LGBT supporters at their side.  The President of the U.S., governors, mayors and aldermen routinely issue proclamations denoting LGBT Pride month.


Mr. Obama stated in his proclamation: “As progress spreads from State to State, as justice is delivered in the courtroom, and as more of our fellow Americans are treated with dignity and respect — our Nation becomes not only more accepting, but more equal as well.”  By contrast, 45 years ago Richard Nixon was president.
Banks, airlines, breweries, credit card companies and numerous other corporate entities see the business advantages of participating and/or sponsoring Pride events to cash in on the trend.  They want their brands associated with Pride. 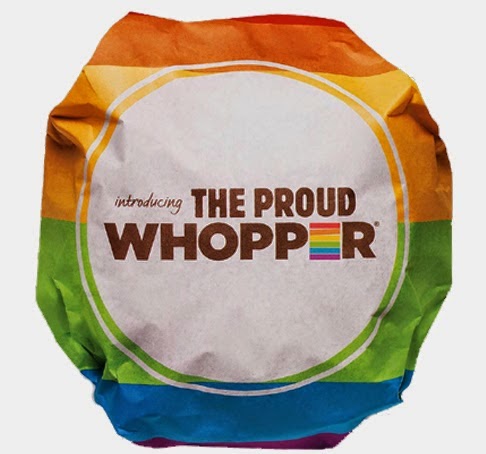 Over a million attended New York and San Francisco’s Pride events.  A Pride flag flew at the U.S. Embassy in Tel Aviv during that city’s Pride week celebration.  Professional hockey players marched in the WorldPride Parade in Toronto.  Burger King rolled out its own Pride-themed “Proud Whopper” wrapper in SF that says, “We are all the same inside.”  How cool is that?
For the first time in 82 years, a Chicago Cubs baseball game was not scheduled on a Sunday in favor of the huge Chicago Pride parade that would snarl traffic near Wrigley Field.  A tradition of that magnitude yielding to LGBT Pride would have been considered inconceivable just a few years ago.


In Baltimore, the big debate was not how to achieve basic rights but whether Pride attendees should be allowed to openly consume alcohol during the Pride festival.  It seems so trivial when you think about it, but it’s also a statement of how much has been achieved insofar as this was the burning issue of the day.
Through the spirit of the celebratory nature of Pride around the world, we must also recognize that there is much work that needs to be done.  Nonetheless, the comparison between the conditions existing before the first Pride and the Pride events of 2014 poignantly illustrates the distance traveled on this incredible journey.

Posted by Steve Charing at 3:11 PM

That is a terrific essay that reflects my own thinking of late. For the sake of perspective I'd like to add that the first attempt at celebrating our humanity as Gay people in Baltimore was, if I remember correctly, 1977 or 78. It was a block party on E. 31st St. where the second Gay rights organization, Baltimore Gay Alliance, maintained a small office (the first I believe, used the terms Gay liberation but that is anecdotal and only from what I've heard). As an aside the people who staffed and maintained that small office are still in my mind some of the most courageous people I will ever have known and practiced great courage in staffing and maintaining that small office. Maintaining a little outpost of Gay positive space in a world that was at best benignly malevolent took courage at a time when to be Gay was to be 2nd class at best.

As for entrapment, particularly in the cruising area of Wyman Park (is that now past tense?), the attitude of judges was that if the idea of illegal sexual conduct was in the mind of an alleged offender then the undercover office (usually a sexually attractive man, including one who turned out to be Gay himself) was not engaging in entrapment. Entrapment was only where the undercover office placed the idea of illegal sexual activity into mind of the alleged offender. Make a pass at the cute cop and your life in Baltimore could be ruined. On the other hand imagine if every straight man who made a pass at a woman were arrested? Given the tenor of the day it would be reasonable to assume that the straight man was not expecting instant marriage and legal sexual positions! Maryland law was pretty clear that anything other than the missionary position was quite illegal and very punishable. Did Maryland ever revoke the sodomy and perverted practices statutes following the Supreme Courts invalidation? Ironically I believe that Massachusetts still has not formally revoked those statutes.

So yes as Gay people we have come a distance that is tantamount to light years of societal maturity. I am still amazed whenever I see two men or two women walking hand in hand along the street (and I live in one of the more progressive and liberals neighborhoods of Boston). Perhaps it is my own memory of needing to hide lest violence ensue. Recently I enjoyed noticing a interesting economic moment of equality in my neighborhood. I volunteer at a local historic house. The grounds of the house make for a pleasant place for both weddings and wedding receptions. Recently there was mention of the value of promoting the house particularly to the Gay community as a site for marriages. Not one person blinked an eye at the idea. Actually the idea was well received and seen a very positive market for the house. The house itself is interesting (called the Loring - Greenough House if you're interested). It was saved by a women's club in the 30s. As a reflection of sexism of the day as a non-profit for years it was seen as a minor organization and not worthy of the kind of funding received by historic properties run by men. The instances where 2nd class citizenship are sometimes fascinating in their subtly.