Seeing Red: The Dems and the Election Bloodbath

Typically, the color red signals danger, such as a red light at an intersection or a red flag.  In other cases, red has a negative connotation like in red-handed, red tape, redneck, red herring and an undesirable ink color on a balance sheet. 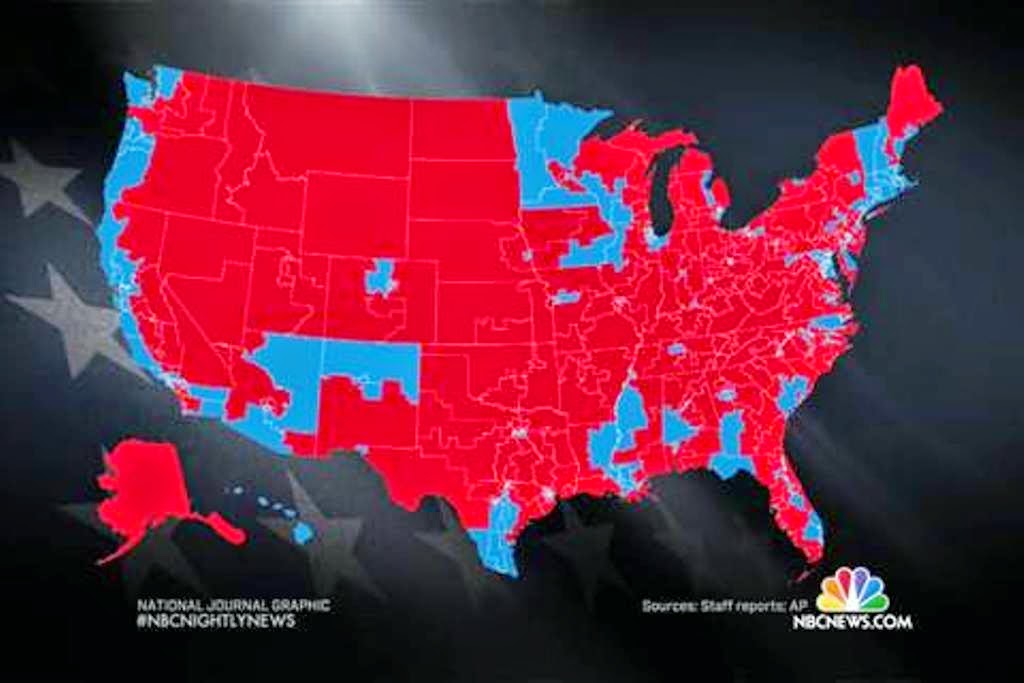 To Democrats, by the time midnight rolled around on Election Night, the nation in general and Maryland in particular had been soaked by a splash of red as if a bucket of pigs’ blood was emptied from above like in the horror film Carrie.
Republicans, who are associated with the color red as in red states, counties, etc., pulled off a stunning string of victories from the U.S. Senate to council offices down the ballot that painted the map a sea of red.
This phenomenon is not unusual as the party not occupying the White House in the sixth year of a second term of a presidency historically makes gains—sometimes substantial and transformative as one we just experienced.  It was expected that the prevailing mood of national discontent with President Obama for reasons still beyond my comprehension would result in a changing of the guard in the Senate and an increase in the ever-growing conservative gerrymandered district-rigging of the House of Representatives.  #hocopolitics


Democratic candidates treated Obama like he was kryptonite with some even blaming him for the Ebola outbreak that consisted of one death here.  That the nation’s voters would ignore the fact that unemployment is down to 5.8 percent and the 214,000 added jobs in October means that employers have added at least 200,000 jobs for nine straight months, the longest such stretch since 1995 is pathetic.
The stock market has reached new heights.  Gasoline is at relatively low levels. Obamacare, so reviled by those who didn’t have a clue what was inside the law, now allows uninsured citizens access to health care.  Oh, and Bin Laden is dead and GM is alive (even if some of their drivers aren’t).  Nonetheless, the Dems ran away from all that—a sure-fire losing strategy.


Yet, Democratic voters and candidates also seem to have forgotten how the Republican Party with the lowest approval ratings on record, shut down the government, nearly allowed the U.S. to default on its obligations, and stifled reform on immigration, sensible gun control and any job package the President sent up the Hill.
It makes me see red.
Not that the results would have been much different but Democratic candidates virtually conceded the election to the GOP by distancing themselves from Obama.  It wasn’t just a surge of anti-Obama folks that descended on the polls that shaped the outcome; reliable Dem voters stayed home.  That’s how you lose if you’re a Democrat.
In Maryland it was a similar playbook for the Republicans: tap the electorate’s perceived discontent and hope that the Democrats field less than stellar candidates so Dem voters, too, would pass on this off-year election.  That formula worked in the Governor’s race.


Lt. Governor Anthony Brown, the heir apparent to Governor Martin O’Malley, skated through the primary to defeat two other LGBT equality advocates, former delegate Heather Mizeur a lesbian, and Attorney General Douglas Gansler.  The LGBT community was divided among them but Mizeur garnered the most enthusiasm.  Dissension spiked when the Equality Maryland PAC made a curious and controversial endorsement of Brown so early in the process.

It wasn’t just a surge of anti-Obama folks that descended on the polls that shaped the outcome; reliable Dem voters stayed home.


Brown avoided specifics during the primaries—a deficiency that would later haunt him in the general election—and squashed his two rivals by depending on the formidable O’Malley “machine” that attracted huge amounts of cash, paid worker bees, numerous volunteers, union support  and a host of other endorsements.  Don’t knock that machine, however; we wouldn’t have achieved marriage equality without it being cranked up at the right time when the Question 6 campaign was floundering in the early stages.


In the Brown vs. Hogan match-up, Brown failed to present any kind of vision for the future and instead trusted his “campaign strategists” by attacking Hogan as a bogeyman thus raising the profile of the relatively unknown former appointments secretary in the single-term Ehrlich administration.
Larry Hogan was far more effective in face-to-face debates, staying on message about the multitude of tax hikes under the O’Malley administration and the disastrous rollout of the state’s new health care exchange of which Brown had been assigned the lead.  Armed with witty quips and zingers, Hogan scored big during these contests and Brown’s failure to defend the administration or Maryland’s economic posture for that matter helped seal the deal.


Though Republican voters in the state sniffed a huge upset, the ultimate outcome was not decided by them but the tens of thousands of eligible Democrat voters who rode this one out.  Call it voter self-suppression.  Baltimore City, an anticipated boon to the Brown election map, had a 35 percent turnout.  Ouch.
Fortunately, marriage equality and transgender protections were achieved in Maryland before this election.  Hogan, although he promised not to try to turn back these settled issues, probably would not have signed a same-sex marriage bill into law, let alone fight for it like O’Malley did.  He said he has since “evolved” on marriage equality (sound familiar?) but stated he opposed the transgender non-discrimination bill—the Fairness for All Marylanders Act.


Nationally, the more conservative entrenched Congress will not act on finally passing the Employment Nondiscrimination Act or ENDA, which has been languishing in Congress for decades.  As has been the experience in the past, the GOP will probably misinterpret the election results as a mandate, and will hamper their being a national party when its leadership will revert to appealing to their shrinking base of white, male, older, rural, Protestant and heterosexual Americans, believing there is no need to reach out to LGBT folks.
The next two years will be seen as a pause in our struggle for progress on many levels.  If we can wait it out, perhaps all that the red will turn into a rainbow.
Posted by Steve Charing at 10:29 AM