It’s that time when I once again look through the rear view mirror and award the OUTspoken OUTIES for the past year.  I reviewed the events of this past year in the areas of politics and culture and am presenting an unapologetic, subjective, biased list of winners (and losers) who are deserving of the OUTIES trophy. In no particular order, here are the OUTspoken OUTIES of 2014. 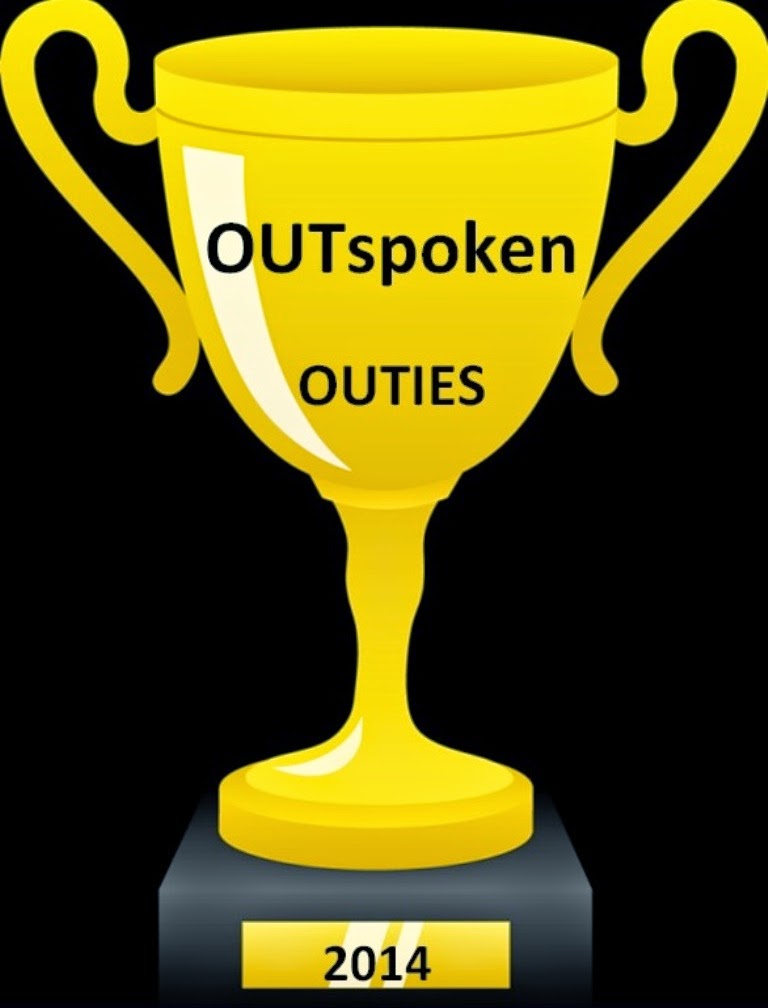 Best Politician: Hands down, it’s Larry Hogan.  The Republican managed to rise from obscurity in a state that is 2 to 1 Democratic and ran a steady race to upset Anthony Brown (see below).  His economic message was focused, and his debates’ searing zingers hit the mark. The Brown strategists’ ineptitude and voter apathy helped.
Worst Politician: Hands down, it’s Anthony Brown.  Having cruised to a primary victory, aided by the Democratic establishment, a solid running mate and outspending his opponent by a 5 to 1margin, Brown went negative too early to lift Hogan’s name recognition giving him a chance at victory and squandered a clear opportunity to be the state’s first African-American governor.


Worst Example of Citizenship: The tens of thousands of voters who sat out the election but undoubtedly will grumble ad nauseam about how bad our elected officials are.
Worst Political Bet: Equality Maryland’s PAC for riding the front runner and endorsing Brown before the primary while alienating Mizeur and Gansler supporters in the process.  With three proven allies for LGBT equality running, EQMD should have remained neutral until the general election.

Most Gratifying Success: The passage of the Fairness for All Marylanders Act (FAMA) resulting in non-discrimination protections for transgender folks without having to deal with referendum drama.  The hyped bathroom scare didn’t work.


More Good Fortune for Trans: Movies, TV shows and a cover story on TIME helped propel more visibility for the transgender community.  Recall how Will & Grace and Real World helped gays to be more accepted.
Worst News for Trans: Two more brutal murders of trans women in Baltimore with little likelihood the cases will be solved.


Doing More With Less: A scaled down Equality Maryland, financially and in staff, managed to be a significant player along with other groups and individuals in getting FAMA enacted.
Best Local LGBT Organization: FreeState Legal Project for providing important pro bono legal assistance to those LGBT folks who can least afford it.


Most Altruistic Organization: Repeat winner Brother Help Thyself, which raises much needed money for non-profit LGBT orgs. Great work and they do it every year!
Most Popular Job: Executive Director at the GLCCB.  Three people have held that (or interim) position during 2014.  Here’s hoping for more stability at the Center.


Best ‘I Got the Message’ Organization: The GLCCB, under fire for a lack of transparency and inclusiveness, has taken a series of concrete steps to help alleviate concerns.  It needs to continue.
Best Eatery to Lunch in Mount Vernon: Tavern on the Hill on Cathedral Street offers up a broad menu, tasty food and friendly service at a reasonable price.


Best Mount Vernon Restaurant for Dinner: The Mount Vernon Stable, an area fixture, provides a nice atmosphere for LGBT folks and serves fine dinners (and brunches and lunches) from a friendly staff.
Sorry to See You Go: The closing of The Quest was a blow to the Highlandtown locals and others who wanted to venture from other LGBT venues.  Its neighborhood feel is hard to duplicate.


Best Gay-Friendly Theater: Basically all local theaters are LGBT-friendly.  But Toby’s of Columbia with its large number of resident gay performers and staff gives it an edge.  Sometimes when visiting it seems like Pride with a buffet.  And the shows are reliably superb.
Best Gay Film: The BBC-produced Pride, which ran at the venerable Charles Theater, was my favorite.  It told a heartwarming story of how blue collar laborers and gays bonded to form a strong and successful alliance during the 1980’s miners’ strike in the U.K.


Best Gay Play: Iron Crow Theatre’s Homo Poe Show wins here. Well directed and acted, Homo Poe Show is a weird play in true Iron Crow tradition that consisted of a series of short pieces in an attempt to present Edgar Allan Poe’s works through a queer lens—forevermore.
Best Gay Musical: Dundalk Community College’s splashy production of one of my all-time favorites La Cage Aux Folles wins.  Given that there were gay main characters, the music and lyrics were penned by a gay composer Jerry Herman and the book written by Harvey Fierstein who is also gay, there is no question it deserves the OUTIES trophy.  Moreover, La Cage gives us the unofficial gay anthem “I Am What I Am.”


Best TV Show with a Gay Character: Move over Modern Family and make room for the Boston-based The McCarthys.  Ronny, the gay character played by Tyler Ritter (who is straight), is a hoot as is the rest of his snarky, loveable, sports-obsessed Irish-American family.
Best Kiss Since Al and Tipper Gore: Michael Sam locking lips with his sculpted abs boyfriend Vito Cammisano on ESPN upon learning that Sam was the first openly gay player to be drafted in the NFL.  Sadly, he failed to make a team—yet.
Posted by Steve Charing at 9:46 AM