Despite Donald Trump’s bellicose “fire and fury like the world has never seen” threat to North Korea, there probably won’t be a war.  I said, “probably” not “definitely.”

Nothing would be gained from it, and both nations have been issuing threats to each other for over 15 years without direct military action. North Korean leaders over this time are just seeking relevance and respect on the world stage—that they are a force that no longer can be ignored.  They are not looking to be annihilated.

Of course, there is no guarantee that there will be no hostilities given the half-crazed leaders of the two nations.  Kim Jong-un already won the first round of the latest exchanges by baiting Trump to react.  His threats are likely to intensify knowing he has Trump in the palm of his small hands and will toy with him like a cat does with a mouse.

Kim is aware that military actions may be on the table during high level security meetings in Trumpdom but reality has a way of interfering with such matters.  Kim is holding millions in South Korea, Japan, Guam and U.S. troops stationed in those areas hostages, not to mention portions of the U.S. homeland that could be targets of an attack.  With that grim prospect, I believe we will not be launching a strike on North Korea unless there is a direct attack initiated by Pyongyang.

Nonetheless, Trump needs a war to survive.  With approval ratings sinking and no ostensible hope they will improve in the near future, his oversized ego is taking a big hit. Sure, he will discredit the polls as “fake news” and that polling was off prior to the 2016 election (he’s right about that one), but deep-down Trump knows better.

His refusal to reach out beyond his base is a disgusting display of cynicism and clearly does not have the good of the country on the front burner.  Trump has a bunker mentality whereby he surrounds himself with similar-minded novices, charlatans, unqualified family members, generals he admires, and holds rallies re-litigating the 2016 campaign for those who stubbornly cling to him regardless of his performance.  Never mind that he has failed to deliver on most of his signature promises.

That’s a formula for 33 percent not being the floor but the ceiling.  He’s losing independents at a torrid pace and conservative Republicans are beginning to seep out of his domain.  To be sure, Trump stands no chance with Democrats though he had been one for most of his gilded life.

Then there is the Russia thing.

With Robert Mueller casting a wide net around Trump, his finances, his family’s business dealings, his campaign staff’s ill-advised and probable illegal meetings with Russian officials, Trump must be feeling squeezed.  And most recently, the FBI’s raid on former Trump campaign manager Paul Manafort’s residence should sound alarms.

He has been warned against firing the special counsel to prevent the investigation from proceeding further though he calls it a “hoax” and a “witch hunt.” Only his base, which includes his propaganda arm, FOX News and Breitbart, believe that spin.

I am sure Trump and his advisers are aware that the GOP has a good chance of turning over the House of Representatives to Democrats in 2018.  If that holds true, the “I” word would surface like a dead fish in the ocean especially if Mueller’s report ever sees the light of day.

If the matter with North Korea escalates, it could have a profound effect on the investigation.  To be clear, I am not suggesting Trump would deliberately start a war with potentially tens of millions of casualties to protect himself and his interests.  That would be over the top; however, there are many folks on social media who cynically believe he is capable of such a hideous act.

But should there be a war of some magnitude, I suspect Trump would try to find a way to end the investigation.  He would go in front of the American people—not just his base—to simply state the country is at war and the ongoing investigation is a needless and harmful distraction for the Commander-in Chief.  It’s a matter of national security. 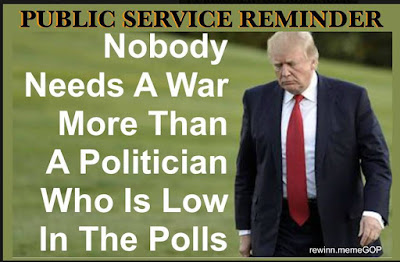 Getting the public to support a war if there is no direct military attack on the homeland or our allies can be dicey.  Generally, public opinion shifts to the president in times of war but as we have seen in the past 50 years, war divides the country.

As tragic as war would be, "fire and fury" could save the Trump presidency in the short term.