Why Won't the GOP Stand Up to Trump? 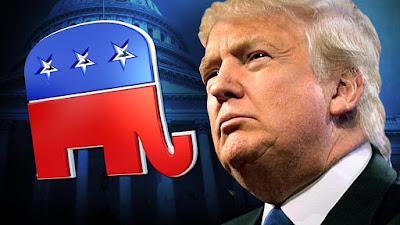 Let’s just say for the sake of argument that Hillary Clinton was elected president.  Now imagine the reaction from Republicans if members of her campaign team had met with Russians operatives with possible collusion in Russia’s attempt to get her elected.

Imagine if she divulged classified sensitive information to the foreign minister and ambassador from Russia in the Oval Office when only Russia’s state-owned media were permitted to attend. Imagine if she insulted our allies overseas but refused to criticize Russian President Putin—ever.

Consider their reaction if she reneged on her promise to make her tax returns public. Imagine if she had business dealings all over the world and refused to divest during her presidency.

Imagine in her first 6 months as president she made 37 golf trips at taxpayers’ expense.

Think of how the Republicans would feel if she fired the investigator leading the investigation of her and her campaign. Picture how they would react to the shameless, disgusting politicization of a speech to the Boy Scouts of America. Or how they would like it if she encouraged those scouts to boo a former Republican president.

Imagine the GOP reaction to her appointing her daughter and son-in-law to key White House posts and assigned one of them to engineer Middle East peace though completely unqualified to do so. Or their failure to disclose meetings with foreign agents on a security clearance form under penalty of law.

Think of how they would react if she went on campaign-style rallies, re-litigating the election, bragging about the size of her victory, and constantly berating her vanquished Republican opponent.  Imagine if she lied about just about anything every single day.

I could go on and on and on, but as you know, these actions were not taken by Hillary Clinton but by President Donald Trump.  And the Republican responses to these episodes? Crickets.

Under fire by Democrats and independents for putting party before country, the Republicans, especially those in Congress, have been loath to criticize or even punish Trump for his seemingly limitless indiscretions.

So, why are these actions ignored by Republican lawmakers not to mention his base?

It can't be because he has been a rock solid Republican throughout his career.  Trump is a Johnny-come-lately Republican with little or no ideological foundation at his core. Why the loyalty from the GOP?

His approval ratings have hovered between the mid-30s to low 40’s rendering him the most unpopular president in modern history at this point of his term.  And much of his approval comes from states Republicans win anyway.  Trump has shown no propensity to expand his support beyond that base. While his support is intense, it is narrow.  Why the loyalty?

On the surface, it’s a mystery that has befuddled Democrats.

Here’s the reason.  Republicans lawmakers, despite reports to the contrary, are scared shitless of Trump.  #hocopolitics

Trump’s compulsive use of Twitter is a missile that can’t be knocked down.  He hits and hits hard without any shame and often without any human decency.

His infantile abuse of Twitter knows no bounds and his fellow Republicans fear being on the receiving end of sharp, sarcastic tweets or public statements.  Often, he will embarrass them and their constituents are paying attention. 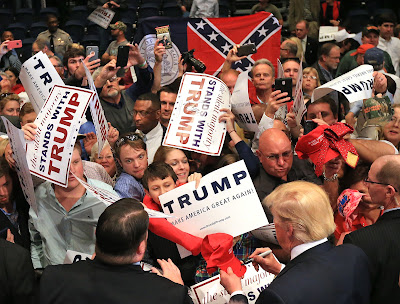 Heck, he will abandon his most loyal supporters if it suits him.  See: Jeff Sessions.  That strikes fear, too.

Then there’s that base.  More energized than so-called establishment Republicans, these folks maintain a strong almost scary loyalty towards their leader.  They will vote and will do so in primaries should they occur.  Incumbent Republicans are ever so mindful of that and are extremely hesitant to take down Trump lest the base gets pissed.

That trend may end if Trump goes on to fire “beleaguered” Attorney General Jeff Sessions who retains strong support from GOP conservatives in Congress. Or worse, if Trump fires Special Counsel Robert Mueller who is well on his way to finding the truth about the Trump campaign and the Russian meddling in our election in addition to potential obstruction of justice and money laundering suspicions.

There are signs, though, that the Trump hold over Republicans may be showing signs of cracking.

Moreover, former GOP Congressman and current MSNBC "Morning Joe" anchor Joe Scarborough recently announced he is leaving the Republican Party because of its acquiescence to Trump.  Other high profile former Republican politicians and operatives have also refused to support Trump.

And Billionaire health care mogul and former GOP mega donor Mike Fernandez, who left the Republican Party because of Trump, told Politico: “All the Republicans who hide behind the flag and the church, they don’t have the F-----g balls to do what it takes.”

Those balls are now in the GOP’s court.
Posted by Steve Charing at 12:37 PM