Democrats Must Play the Trump Card 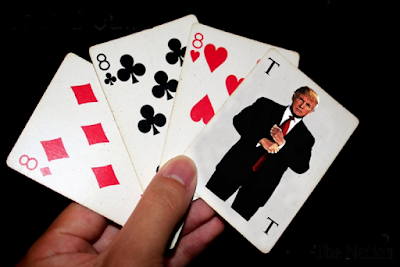 Some pundits have said that for the Democrats to win big in 2018 they should not run against President Donald Trump and instead provide a positive message.  A positive message to be sure and that should include appealing to working class Americans of all stripes. But they should also definitely run against Trump Republicans in every contested seat from the Senate and Congressional races to the governors’ contests and state legislatures down to the local level.

Why?  Because the Republican Party is now the Party of Trump, and the Dems must run against HIM to run against THEM.

With very few exceptions, Republicans have been sucked into the Trump horror show mainly as a result of fear—fear of Trump’s self-destructive but weaponizing tweets, fear of being “primaried,” and the fear of Trump’s base not turning out in November.   #hocopolitics

What used to be a party of chest pounding bravado, they have turned into a squishy band that is weak on Trump. They brag about their “patriotism” yet patriotism does not mean it is okay to allow a foreign government to install a U.S. president of their choice.

The Republican Congress' steadfast support of Trump is certainly not as a result of principle or ideology.  Recall how the GOP including its evangelical supporters backed Roy Moore in the Alabama Senate race –an accused child molester and sexual assaulter—and in doing so, put party over country.

Yes, the Republican Party and Donald Trump are intertwined.  Every Democratic candidate must couple the words “TRUMP REPUBLICAN” at every turn.  Despite a pre-Rob Porter controversy tiny uptick in the polls, Trump is reviled and remains profoundly unpopular.

Women, young people, and minorities will see this opportunity to repudiate the misogynous and racist president who has churned up the energy and enthusiasm in these key voter blocs.

Democratic candidates must remind voters about the Charlottesville tragedy when Trump said “there were very fine people on both sides.”   Those fine people included neo-Nazis and members of the KKK.  That should motivate African-Americans and Jews to vote.

Voters must be reminded how Trump has defended all those high profile men who have been accused of sexual assault, sexual harassment and wife beating by insisting they denied it—never exhibiting empathy towards the victims.  And let’s not forget his Access Hollywood admissions. These should further motivate women to vote.

They should remind voters how Trump has played politics with DACA and the Dreamers as well as his vile anti-Mexican comments. They should remember Trump's lack of concerns for Puerto Rico and the degrading paper towel toss.  That should motivate Hispanic voters.

They should remind voters of how Trump mocked and insulted the Gold Star Khan family as well as his Muslim travel ban.  That should motivate Muslims.

They should be reminded how this administration has attempted to roll back key gains and rights for LGBT individuals.  That should motivate that community, their family members and their friends to vote.

Because of their refusal to stand up to Trump and vigorously denounce him publicly, just about every 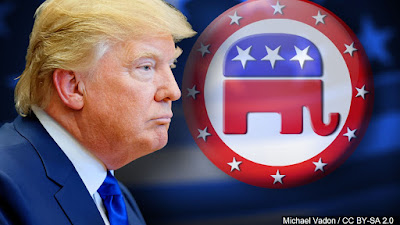 Republican is complicit with these stains.  While many of them privately do not agree with Trump’s policies and actions on these fronts nor care much for his character, they still must be linked to him because of their reticence.

There is no question that Republicans will label a Dem candidate as a “Pelosi Democrat,” That strategy already worked against Jon Ossoff in the ballyhooed GA-06 race last year.  That is their big weapon plus their overblown tax cuts that mainly benefited the highest income earners and corporations and which have filled the coffers of their donors. That increased the deficit by $1.5 billion paving the way to cuts in Medicare, Medicaid and Social Security.

What Democratic campaigns must avoid is playing the impeachment card. Impeachment is both a legal and political process, which should unfold if and when the circumstances arise. By urging voters to come out to vote for a Democratic candidate because it will make it easier to impeach Trump will also being out rabid Trump supporters, when otherwise may have been dispirited to vote in the mid-terms.

Play the Trump card: “Trump Republican.” Use that phrase and perhaps Democrats can help make America sane again.
Posted by Steve Charing at 9:16 AM