Lisa Davidson does not drink and often feels alienated because so many queer spaces and events revolve around drinking.  So, when she learned that the Baltimore Orioles announced it will host its very first official LGBT Pride Night on June 27, Davidson was eager to participate.

“The fact that this was just a plain ole’ baseball game made my heart happy,” Davidson, a resident of Bel Air. Md., said after the game.

“I loved being invited into a space that wasn’t inherently queer and being welcome. It’s easy to forget I’m ‘different’ sometimes, but sharing a night at Oriole Park at Camden Yards—something I love doing and always have—with people who look like me and walk like me and love like me was so wonderful.”

She hosted an unofficial event page on Facebook to gin up the turnout.

“If we could mobilize as many ticket purchases as possible, the Orioles would know that we wanted this night, this night was special, and we want it to keep happening. And I think we showed up in awesome numbers and our love was louder than the hate,” she said.

Indeed, the turnout was quite impressive with over 1,900 tickets sold as part of the Pride event, according to Orioles’ public relations office. A portion of the proceeds benefited Moveable Feast.

The Orioles, which was among the 23 Major League Baseball teams scheduled to hold similar Pride events in 2018, offered VIP tickets for a pre-game party that included food, beverages, and music provided by DJ Rosie, a local favorite. 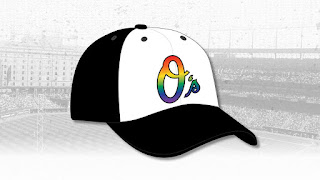 Others bought tickets at a lower price whereby special Oriole Pride-themed black and white baseball caps with rainbow colors filling the “O’s” were included in the deal. (The VIP tickets also included the cap.)  Still others purchased tickets at an even lower price and could buy the caps separately.

Most of the diverse Pride crowd was situated in field level sections down the right field line, and as demand grew, seats were made available at the terrace level and other areas in the ballpark.  They witnessed the home team losing in extra innings to the Seattle Mariners, 8-7.

In the past, such outings commemorating Pride were organized at the grass roots level with some of the proceeds going to the GLBT Community Center of Baltimore. However, these Pride Nights, though they drew several hundred participants, were not official team events on the Orioles’ schedule.

Last Wednesday, the Orioles marked the occasion by the words “Welcome to LGBT Pride Night at Oriole Park” in rainbow letters displayed on the outfield video screen as well as other areas along the stadium’s façade.  The Baltimore Men’s Chorus performed prior to the game and during the 7th inning stretch.

Gay retired MLB umpire Dale Scott who came out while still active threw out the ceremonial first pitch to rousing applause and warm embraces from his former colleagues who were working this game.

One of the evening's highlights was the popular “Kiss Cam” feature between innings.  A camera is trained on a couple while the image is projected on the large video screen. They spot themselves on the screen and begin smooching while the crowd reacts.  Typically heterosexual couples are featured.  But on this night several same-sex couples were highlighted, much to the delight of the crowd.

“I had an overwhelming moment of happiness when I thought about the same-sex Kiss Cam kisses and how, hopefully, 20 years from now the giddy excitement over seeing it will be gone because it will just be the norm,” said Nina Sharp, a resident of Mount Vernon.

Baltimore’s Jon Kaplan was a whirlwind of activity, darting all over the LGBT sections hob knobbing with old friends while perhaps making new ones.

Reminiscent of  unofficial Orioles cheerleader at Memorial Stadium, Wild Bill Hagy, Kaplan also led the crowd in Section 8 in cheers by trying to shout above the ball park noise, “When I say O’s…” and the fans put their hands together forming an “O.”

“It gives me so much joy to see our community and allies get together as a group and celebrate our diversity in public venues,” says Kaplan.  “It’s crucial that we continue to show the world what a wonderful LGBTQ community we have to offer in Maryland.”

A local LGBT-owned business joined the party as well. The Baltimore Eagle offered an extra deal of 2 for 1 on the first round of drinks after the game for those wearing the Pride Cap or showing the ticket. “We wanted to keep the night going and just add more to the fun,” said co-owner Charles King. “A large group of employees and us owners came out and supported the team. We had a great time.”

Of course, not everybody was pleased with the Orioles’ promotion.  A person named Jack Thomas posted on the Orioles’ Facebook page in reaction to the announced LGBT Pride Night, “Promote, and celebrate perverted minds, Orioles! Just another good reason not to watch that lousy team.”

Lisa Davidson acknowledged that there were angry people who cannot accept these Pride events or LGBT Pride in general.  “I know I can’t reason with people like that, so the only way I knew to ‘fight back’ was with love and my queer-wallet of not-so-much-money, a ‘millennial problem.’”

“As a gay man, I’m proud of the Orioles for hosting an official LGBT Pride Night, as it sends a clear message to our fans – and our staff – that the organization is welcoming and supportive of everyone, regardless of someone’s sexual orientation or gender identity,” Bader told Outsports.

“Based on the behind-the-scenes support the organization has afforded me and my fellow LGBT coworkers through the years, it’s no surprise that the team would also be so supportive in this public way.”

The Baltimore Orioles confirmed the event will continue in the future.