There He Goes Again 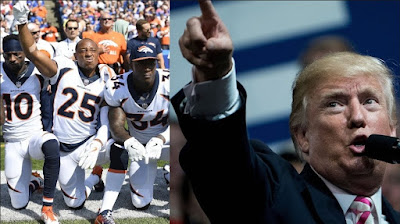 Fresh off the most embarrassing performance by an American president on the world stage in my lifetime and his legal woes becoming increasingly dicey, President Donald Trump—the master of distraction and disinformation—found a new shiny object to change the news cycle.

It’s back to a tried and true argument to keep hold of his base: the kneeling NFL players who protest police injustices heaped on African Americans. With the NFL and its players association reviewing the current policy regarding taking a knee during the anthem Trump saw the opportunity to discredit the players and suspend them for not adhering to his view of patriotism. He tweeted:


The NFL National Anthem Debate is alive and well again - can’t believe it! Isn’t it in contract that players must stand at attention, hand on heart? The $40,000,000 Commissioner must now make a stand. First time kneeling, out for game. Second time kneeling, out for season/no pay!
— Donald J. Trump (@realDonaldTrump) July 20, 2018


We can all scratch our heads in disbelief over how Trump can characterize the Nazis and KKK members brandishing torches and swastikas  in Charlottesville as “very fine people’ but those who are exercising their First Amendment right by peacefully demonstrating against a real and at times deadly problem in our society as “son of a bitches.” What is more outlandish and troublesome, however, is Trump’s faux embrace of patriotism. Examples:

► Trump condemns a pillar of our democracy, the free press, as the enemy of the people.

► Our commander-in-chief did all he could to avoid military service—5 times in fact.

► Our commander-in-chief is clueless as to the meaning of the Purple Heart.

► He has never once visited the American troops overseas but has played golf 131 times.

► As president he has undermined the FBI, CIA, our intel services and the rule of law.

► He invites Russian diplomats into the Oval office with no other Americans present and gives away classified information from a trusted ally.

► He ordered the detainment of people and the separation of their children as they legally entered the U.S. seeking asylum.

► Trump allows the flag of North Korea, under a brutal and murderous regime, to be side-by-side to the American flag in Singapore.

► Trump cowered to Putin in Helsinki and essentially surrendered to Russia.

► He refuses to do anything to prevent another cyber attack on our democracy.

► Trump invites the same man who helped elect him as president to visit the White House in the fall.

► More than half the country view Trump as a traitor following the Helsinki debacle.

So, please Mr. Trump, stop lecturing us and African American football players about patriotism. You’re not at all patriotic. In fact, you’re a traitor.

Posted by Steve Charing at 3:23 PM