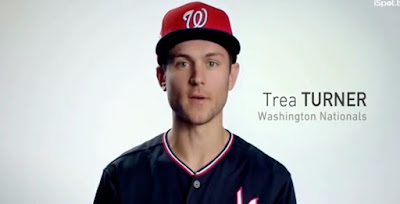 A local favorite, Washington Nationals shortstop Trea Turner, became the third MLB player since the MLB All-Star game to have had racist, homophobic and/or misogynous tweets that were posted 6 or 7 years ago unearthed.

Milwaukee Brewers pitcher Josh Hader’s offensive tweets surfaced after that game. Atlanta Braves pitcher Sean Newcomb, who was one strike away from a no-hitter on July 29, was forced to deal with his written artistry immediately following the game.  Then Trea Turner’s tweets appeared hours later.  All three players are either 24 or 25 and all wrote their controversial social media insults while they were 17 or 18, prior to being in the major leagues.

There’s no excuse.  At that age they should know that homophobic and racist slurs are wrong because undoubtedly they heard or read them while in high school if not before.  For those who think anti-LGBT bullying or bullying of any kind by adolescents are on the wane, think again.

“Two of Turner’s resurfaced tweets were replies in which acquaintances were called homophobic slurs. In another, the tweet reads “unless ur gay” in a reply to a former North Carolina State teammate. A fourth tweet suggests that if a woman working at a drive-through were to ask who the [faggot] in the back of a car was, it would be Turner. A fifth tweet reads, “Once u go black, u gonna need a wheelchair,” a line from the movie “White Chicks.”

Hader was very contrite in his apology.  Newcomb’s was not as potent an apology though the Braves organization condemned the tweets.

Turner, with his boyish countenance who still looks like he's at N.C. State during the time when the tweets were posted, issued a statement through the Nationals:

“There are no excuses for my insensitive and offensive language on Twitter,” Turner said in a statement released by the Nationals.

“I am sincerely sorry for those tweets and apologize wholeheartedly. I believe people who know me understand those regrettable actions do not reflect my values or who I am. But I understand the hurtful nature of such language and am sorry to have brought any negative light to the Nationals organization, myself or the game I love.”

Nationals General Manager Mike Rizzo said in a statement,  “I have spoken with Trea regarding the tweets that surfaced earlier tonight. He understands that his comments — regardless of when they were posted — are inexcusable and is taking full responsibility for his actions. The Nationals organization does not condone discrimination in any form, and his comments do not in any way reflect the values of our club. Trea has been a good teammate and model citizen in our clubhouse, and these comments are not indicative of how he has conducted himself while part of our team. He has apologized to me and to the organization for his comments.”

Hader, who has already met with MLB executive in charge of diversity and former ballplayer Billy Bean who is openly gay, will be required to attend sensitivity training and that will likely be the same for Newcomb and Turner.  Apparently, no other discipline is in order since the offenses occurred prior to their service in MLB.

Turner emotionally apologized to the communities affected in a gathering of the media at National Park on July 31 before a game against the New York Mets. "It's not when I said those things I said, it's that I said them at all," Turner explained.

Getting the matter off his chest must have been cathartic as he had two singles and two stolen bases in the first inning following his introduction to lukewarm applause from the hometown fans. 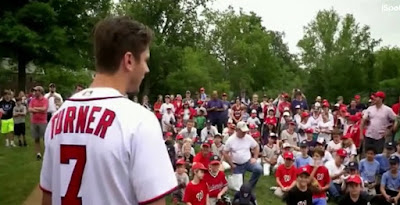 There are silver linings to these episodes.  For one thing, the players involved were quick to accept responsibility and apologized and the teams they played for denounced the tweets.  And MLB took action in short order.

Second, public shaming in the form of loud booing was experienced by Hader in his first road appearance in San Francisco (after he received a standing ovation in his hometown stadium, Miller Park.)  The expectation is that the majority of fans will not tolerate such public comments and will let their feelings known.  It sends a strong message to players who covet endorsement deals.

Third, one would think (hope) the players have evolved from their adolescent behavior.  All three made that point. In Turner’s case, he has ironically been part of MLB’s anti-bullying initiative Shred Hate where he appears in a video.

He can now point to his own mistakes as a credible message to youngsters.