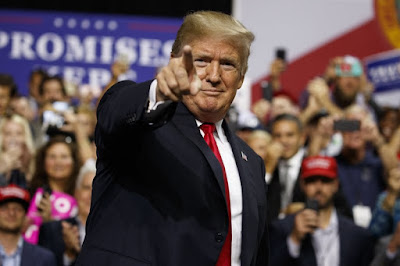 For decades, Donald Trump has thrived from extensive media exposure. Many pundits agree that his unlikely nomination for President in 2016 was in part due to this oversized coverage.  The same could be said for the general election in which the media managed to repeat every utterance and gesture—particularly against “crooked Hillary”—that undoubtedly had an impact on the electorate. (Of course, these public rants in front of an eager press corps may have ultimately worked against Trump as they could very well be key evidence in the Mueller probe on the question of conspiracy with a foreign adversary against the U.S., e.g. “Russia, if you’re listening…”)

Since taking office, Trump has held numerous fiery rallies, which are intended to keep his worshipping base in tow.  Re-litigating the 2016 election and lies about voter fraud have been staples of his diatribes.  Another, which has been emerging with increasing rage, is his constant berating of the media as “fake news.” He went off the rails at a rally on August 2 in Pennsylvania when he characterized the press for delivering “fake, fake disgusting news.”

“What ever happened to the free press? Whatever happened to honest reporting?” Trump asked, pointing to the media in the back of the room. “They don’t report it. They only make up stories.”

His grievance with those journalists covering him (FOX News and Breitbart among other right wing outlets excepted) is that they don’t recognize what he calls achievements, and they seem to cast a shadow over his legitimacy as President by the relentless reporting on the Special Counsel investigation.

Trump wants it only one way: favorable coverage or the news, if negative, can only be fake. Moreover, his mantra that “the press is the enemy of the people” is a direct assault on our democracy and the First Amendment that guarantees a free and open press.  These statements come from the same playbook employed by autocrats, despots and dictators throughout history.

His base eats it up.  Fired up by this rhetoric, Trump’s supporters at the rallies curse and shout obscenities at the press area in the back of the venue.  The other night at a rally in Tampa, CNN’s Jim Acosta faced a barrage of insults from the heckling rabid Trump supporters.  His concern is that the escalating hatred towards the media could lead to violence.  Acosta tweeted:


Just a sample of the sad scene we faced at the Trump rally in Tampa. I’m very worried that the hostility whipped up by Trump and some in conservative media will result in somebody getting hurt. We should not treat our fellow Americans this way. The press is not the enemy. pic.twitter.com/IhSRw5Ui3R
— Jim Acosta (@Acosta) August 1, 2018

Since it is all but guaranteed that Trump will not modify his behavior or demonstrate any attempt to restrain his followers, here’s a possible solution: deprive him of the media coverage that he craves at his rallies.

Don’t bother to show up since there is seldom any news to be reported anyway.  Starve the beast. He is nothing if he can’t be the focus of national and international attention.

Perhaps only then will he act like a mature adult holding the most powerful office on earth instead of a toddler banging on his crib.

But don’t bet on it.

Posted by Steve Charing at 1:42 AM