When it Comes to the Military, Trump is AWOL

Oh, how President Trump likes to brag about his love for the military! He was reared in a military boarding school, surrounds himself with generals, wanted his inaugural to be a remake of a Moscow military parade, and while campaigning (his perennial activity) he said he would be “so  good at the military, it will make your head spin.”

But beneath that thin façade, the real Donald Trump has been so disrespectful to the military it would make your head spin, I can tell ya.

Never mind he was a 5-time draft dodger that included his fabled excuse of bone spurs. He also had been clueless as to the meaning of the Purple Heart believing it was some form of memento or souvenir from military service.  Or that he's currently using our military as political props at the border for political purposes to thwart that menacing "caravan."  Also troubling is the fact he has yet to visit U.S. combat service members overseas.

“[Trump disrespecting] the wartime POW service of John McCain, fantasizing about shooting an Army sergeant held captive by the Taliban for five years, repeated instances of military charities not receiving promised donations, smearing another Gold Star family of color, insulting uniformed leaders and pledging to fire them all, ridiculing combat veterans with PTSD, kicking uniformed personnel off the National Security Council, abdicating responsibility for troop strength in combat theaters, disrespecting the retired four-star general and Gold Star father who runs his White House, shaming the National Security Council on live television, pledging to kick transgender troops out of the armed services, blocking a prominent veterans’ group on Twitter, attacking John McCain again, waiting nearly two weeks to remark on the death of four Special Forces soldiers in combat... He referred to sleeping with models as his ‘personal Vietnam’ and his attempt to kick homeless veterans off 5th Avenue out of disgust.”

As we enter Veterans Day Weekend in 2018, Trump continues to spit on the military and especially its Fallen. On November 10, Trump cancelled his visit to Belleau Wood battlefield and cemetery 50 miles northeast of Paris because of “scheduling and logistical difficulties caused by the weather,” according to a statement from the White House. 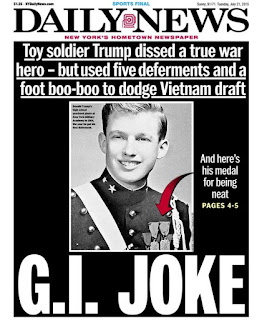 In other words, on the 100th anniversary of the armistice ending the war, Trump wouldn’t pay a visit to the cemetery where  over 1,800 U.S. soldiers and Marines were killed on the battlefield are buried. Some facetiously speculated it was either because his notorious hair would get wet or he still hasn’t mastered the complexities of opening and closing an umbrella.

Nonetheless, Trump received major blowback for his decision prompting a rash of criticism on Twitter. Nicholas Soames, a British member of parliament who is a grandson of former Prime Minister Winston Churchill, said that Trump was dishonoring U.S. servicemen.

“They died with their face to the foe and that pathetic inadequate @realDonaldTrump couldn’t even defy the weather to pay his respects to the Fallen,” Soames tweeted.

Conservative Bill Kristol wrote: “On the Marine Corps' 243rd birthday, President Trump has cancelled, because of light rain, his long-planned attendance at the ceremony at Aisne-Marne, where Marines who fought at Belleau Wood are buried. The WH COS and JCS Chair will be there. The President couldn't be bothered.”

And former Republican political operative Steve Schmidt noting how Canadian Prime Minister Justin Trudeau participated despite the rain, “This is what dignity, leadership and duty look like. Trump debased his office, disgraced the memories of fallen American heroes and shamed himself today. He is as unfit for his office as he is weak and cowardly”

Trump can have all the military parades and trappings he wants. He can lie about his military spending vis-à-vis Obama’s, but it can’t alter the fact that this Commander-in-Chief does not understand or respect the military and those who have made the ultimate sacrifice.

Posted by Steve Charing at 8:03 PM