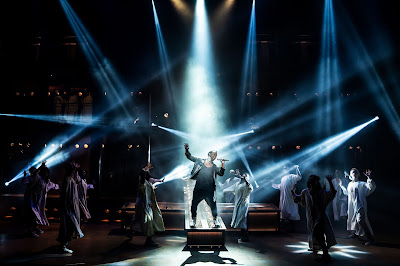 Paradoxically this month, while billions around the world are preparing to celebrate the birth of Jesus Christ, Baltimore’s Hippodrome Theatre is presenting a musical that delves into the last days of Christ’s physical time on Earth. The latest revival of the 1970 rock-opera Jesus Christ Superstar, with the stellar score by superstar-in-his-own-right Andrew Lloyd Webber and lyrics by Tim Rice, has rolled into town depicting Rice’s loosely interpreted events as related by the Gospels in the New Testament.

What has been billed as the 50th Anniversary Tour of Jesus Christ Superstar, the production is more akin to a rock concert than the garden variety Broadway musical. Songs coming at you one right after the other in rapid-fire sequences; high voltage dance numbers abound; hand-held mic’s and mic stands are employed and sometimes double as props; high-tech lighting (designed by Lee Curran) bathe the stage from above as if the rays were emanating from Heaven; fog effects blend beautifully with the lighting; and performers playing musical instruments onstage—all packed in 90 minutes with no intermission to quell the momentum.

The set designed by Tom Scutt features multi-level steel girders upstage with grid-like compartments on the second level where members of the orchestra are situated with some of the performers joining them from time to time. This change in eye level adds an effective dimension to the optics.  The major set piece is a large cross dominating the stage that is used as a runway among other purposes and, ultimately, the Crucifixion.

Though the story line’s contours are derived from the Gospels’ account of Jesus’ last days from his arrival in Jerusalem to the Crucifixion, if you are among those not familiar with the New Testament, you could be at a disadvantage. There is nary a spoken word as this is a sung-through musical, and there is no narration other than the lyrics contained in the songs. Moreover, most of the principals are not readily identified and placed into context. The assumption is that the audience is knowledgeable of the story.

Jesus Christ Superstar with its well-known catalogue of songs is riveting entertainment. Originally, the songs were part of a rock-opera concept album before it migrated to a stage production. Rock, folk and gospel themes reflect the 1970’s era with the lyrics containing modern colloquialisms and other modern references. Among the more popular songs are “I Don’t Know How To Love Him,” “Superstar,” and my personal favorite “Gethsemane.”

The show focuses on emotional relationships and conflicts that touch on such themes as power, greed, celebrity and betrayal as seen through the eyes of Judas  (played stirringly by James Delisco Beeks), one of Jesus’ twelve apostles.

His concern is that Jesus, the King of the Jews (played by Aaron LaVigne), is moving in a direction that will offend the Romans that could bring wrath upon the Jews. In the end, Judas betrays Jesus and terminates his own life. #hocoarts

Mr. Beeks performs the role zestfully especially in such numbers as “Heaven On Their Minds,” “Damned For All Time/ Blood Money” and “Judas’s Death.”

In the title role sexy Aaron LaVigne with his lithe physique is onstage throughout much of the production dealing with his apostles, his relationships with Judas and Mary, and the conflicts with the high priests and their followers as well as the conflicts within himself as to whether he should be an inspirational leader or martyr. God was to make that decision for him.

Mr. LaVigne performs many challenging songs and experienced a couple of rough patches early on the evening this performance was reviewed. But his vocals rebounded and improved markedly as the show progressed. His rendition of the moving, gut-wrenching solo “Gethsemane” is one of the show’s highlights as Jesus comes to grips with his ultimate demise.

He excels during the number “Trial By Pilate/39 Lashes” as Jesus receives the punishment following his famous trial. In a shocking display, each of the 39 lashes is accompanied by glitter where some of that adheres to his already bloodied body. He winces and recoils and convulses from each of the lashes. It is quite a spectacle.  Mr. LaVigne’s overall performance is stellar.


Jesus Christ Superstar with its well-known catalogue of songs is riveting entertainment.


As Mary Magdalene, the prostitute who provides comfort to Jesus and develops a love interest for him, Jenna Ruball is spot-on. Her soulful, sweet voice is evident in “I Don’t Know How To Love Him,” another of Superstar’s iconic songs.

Alvin Crawford plays Caiaphas, a high priest, who along with others, sought to persecute Jesus. His bass vocals are excellent and notable in the sinister “This Jesus Must Die” and in the group number “The Arrest” where he is joined by another high priest Annas, played well by Tyce Green.

Tommy Sherlock portrays Pilate, the Roman governor of Judea who dreams of Jesus’ crucifixion only for it to actually happen. He excels in the song “Pilate’s Dream” and the production number “Pilate and Christ.”

Simon, one of the hawkish apostles, is played by Eric A. Lewis. His number is “Simon Zealotes/Poor Jerusalem” and demonstrates strong vocals.

Also possessing a solid singing voice is Tommy McDowell as Peter, another disciple who denies Jesus three times at the time of Jesus’ arrest to save himself. He performs in “The Arrest,” “Peter’s Denial” and in the duet with Ms. Ruball in “Could We Start Again, Please.”

Then there’s King Herod, King of Galilee, played by Paul Lewis Lessard, who had a role during the trial. Decked out in flamboyant garb co-designed by Keith Caggiano and Nick Lidster that I can visualize Liberace and Elton John fighting over, Mr. Lewis performs well in the aptly named “Herod’s Song.”

The remainder of the company under the direction of award-winning Timothy Sheader and choreographer Drew McOnie, also an award recipient, as well as Musical Director Shawn Gough, is exceptional in voice and through their up-tempo precise dancing.

With such a compact production and without dramatic dialogue, there is insufficient opportunity to provide a more in-depth look into the relationships among the principals. And, as most people are aware, this is not a feel-good story in any shape or form.

Yet, the music, staging, the talented performers, electric atmosphere and the technical effects at the Hippodrome make this a fundamentally enjoyable experience and a timely Christmas present. But hurry, the show’s tour stop in Baltimore ends on December 22, 2019 A.D. 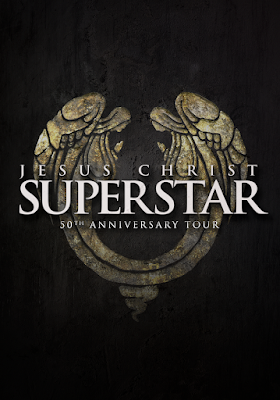 Posted by Steve Charing at 1:28 PM