How Biden Should Handle the Debate 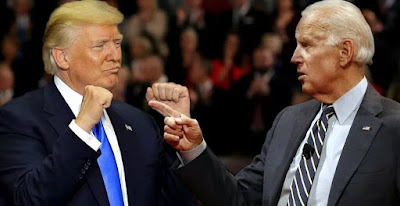 We are approaching the first debate in an election that will decide whether our democracy can be saved or will our country descend further under a totalitarian regime.

Down in the polls and desperate for a game changer, Donald Trump, the premier conman, is a master of gaming the situation. After months denigrating Joe Biden’s mental acuity, Trump is now marveling over the former vice president’s 47 years of experience that presents Biden with a decided advantage in the debate in Cleveland on September 29.  Trump is also trying to psych out moderator Chris Wallace by falsely complaining that the veteran journalist Wallace is owned by the left.

Wallace announced in advance the six broad topics that will be covered: the Trump and Biden records, the Supreme Court; Covid-19, the economy, race and violence in our cities, and the integrity of the election. Fortunately for Trump, this debate will not touch on foreign policy as he won’t have to mention Thighland or his love affairs with Vladimir Putin and Kim Jong-un. #hocopolitics

As with death and taxes, two things are certain: Donald Trump will lie profusely and attack relentlessly. In that vein, Trump will talk over, shout over and interrupt Biden as he offers his responses.

The TV ratings will shoot through the roof. Virtually all the viewers are familiar with Trump, but despite Biden’s long history of public service, that level of familiarity is not there. Many will be tuning in to watch Biden in action perhaps for the first time. Of course, Trumpsters, led by the president’s two immature, trophy-hunting sons, will be hunting for any stumbles or gaffes made by Biden and will “Benghazi” them on Twitter from here to eternity.

So, what is the best strategy for Joe Biden? He leads in several battleground state polls but not by such a large margin that he can afford to take the night off. He needs to be prepared, act presidential and minimize verbal miscues that could otherwise turn a solid performance into a calamity as the Republican attack apparatus will be in high gear.

I liken this debate to a football game whereby a team is leading by 6 points with 6 minutes to play. Do you play conservatively by keeping the ball on the ground with the hopes of running out the clock? Or do you throw downfield with a risk-reward effort that could lead to a score and clinch the game?

I choose the latter. Biden must not stay back on his heels and accept incoming from Trump. He needs to go on the offense. Trump is not very convincing playing defense; in fact, he sucks at it.

At a convenient point during the debate, Biden should work in some questions to Trump based on the New York Times disclosure, such as why do you pay less in taxes than the average working man or woman in this country? What about the discrepancies between your tax returns and your financial reports? How come you pay more in taxes to foreign countries than the U.S.? To whom do you owe $ millions? There are so many others, too he could ask.

He should remind the audience by accusing Trump of disparaging our fallen war heroes, veterans and active service personnel as “losers” and “suckers.” Even Republicans have been disgusted by Trump’s comments on this matter and would prefer that the subject never surfaces again. Biden needs to make sure it does. At that point as Trump tries feebly to deny making those comments, his nose will undoubtedly itch and he will return to that familiar sniffing reaction we saw during the 2016 debates with Hillary Clinton. Don't forget Putin's bounties on U.S. troops, too. He hasn't answered to that yet.

As for the coronavirus, arguably the most important subject during this cycle, Biden has been effective so far painting Trump as not up to the job, lying to Americans with over 200,000 dead from Covid-19. Recently, he said Trump “froze.” That’s not adequate. Instead, say he “choked”—a word that Trump will equate to fingernails on a blackboard or worse. Also, throw in Trump’s absurd therapeutic idea of ingesting or injecting bleach.  The remainder of Trump’s response to the pandemic has been so ghastly and inept, Biden can reel off the other examples quite easily.

Biden should also unequivocally pin the racist label to Trump. He’s got a trove of evidence to back it up. And while at it, he can restate his opposition to arson, looting and violence.

These are just a sampling of how Biden should play this debate. You know Trump will attack, and Biden must be ready to return serve but be calm about it. Trump accuses Hunter Biden of corruption in Ukraine, Biden can bring up the “perfect call” to Ukraine’s president resulting in impeachment. He can also mention Trump’s three adult children sued by the New York Attorney General’s office for their role in the now defunct Trump Foundation. Touch my kid, I’m going after yours.

I believe that if Biden goes on the offensive and takes no crap from Trump, his supporters will be gushing with pride and Biden will have removed many of the doubts that the Republicans have planted.

If for some reason this strategy doesn’t work this time, there will be two more debates plus the vice president debate as a safety net. But I think it will.

Posted by Steve Charing at 9:50 PM