‘Stand Back and Stand By’: What is Trump Up To? 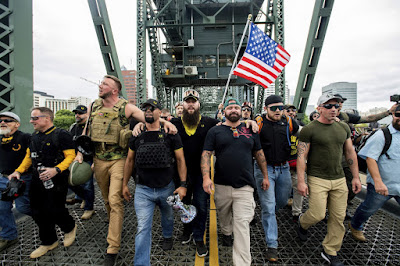 When the smoke cleared from the utterly chaotic and at times raucous presidential debate on September 29 between Donald Trump and Joe Biden, two things stood out to me. One is that President Trump failed to condemn white nationalism and two, he is hell-bent on not accepting the results of the election should he lose. And the combination of the two could be deadly. #hocopolitics

This was the debate where I expected “death and taxes”—the mounting toll on Americans who have succumbed to Covid-19 and the reported tax manipulations and possible fraud on the part of Trump—to be the major subjects.

Instead, in all my years of watching televised presidential debates including the first one between John F. Kennedy and Richard M. Nixon in 1960, I have never witnessed such a gross display especially from a sitting president as this one. Worse and clearly more alarming, Trump may be sending signals that if he loses he will provoke at some level a civil war.

Other than the boorish and obnoxious Trump’s bizarre obsession with Biden’s son Hunter, Trump was very clear in the waning moments of this debacle of a debate that he believes the election will be rigged and tainted—rife with fraud and ballot tampering caused by “unsolicited” mail-in ballots. He is establishing a rationale that if the vote tallies don’t go in his favor, the election would be illegitimate.  He cannot lose this election, Trump believes, and he will not let it happen, not without a bloodbath.

On the question of denouncing white nationalism, Trump could have simply put it away. Instead, he provoked further controversy by avoiding such a condemnation. He asked to name a specific group and both moderator Chris Wallace and Joe Biden suggested Proud Boys. He said Proud Boys should “stand back and stand by”—comments that alarmed many including myself.

“But I'll tell you what somebody’s got to do something about Antifa and the left, because this is not a right-wing problem, this is a left wing,” he said.

The Proud Boys describe themselves as “a pro-Western fraternal organization for men.” The far right, white supremacist, anti-Semitic, anti-transgender group has openly endorsed violence and has recently been tied to several violent incidents at recent protests. Proud Boys has been classified as a hate group by the Southern Poverty Law Center and the Anti-Defamation League referred to them as “hard-core white supremacists.”

Even allies of Trump were baffled by his response. 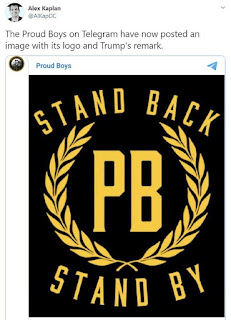 “Donald Trump ruined the biggest layup in the history of debates by saying—not condemning white supremacists,” said Fox News host Brian Kilmeade during Fox & Friends the morning after the debate. “I don’t know if he didn’t hear it, but he's gotta clarify that right away. That’s like: Are you against evil?”

For their part, Proud Boys, who marched in the “Unite the Right” rally in Charlottesville,   rejoiced at hearing the president telling them to stand back and stand by. According to NBC News, on the Proud Boys’ account on the social media app Telegram, the group appeared to take the statement as marching orders.

“Standing down and standing by sir,” the account wrote. The account then posted two videos of the answer, including one with the caption "God. Family. Brotherhood,” in which a man howled at the TV in response to Trump’s response.

Within minutes after the shout-out by the president, Proud Boys crafted a new logo and spread it on social media.

Both candidates were asked whether they would urge their supporters, in view of likely vote-counting delays, to be patient and wait calmly for the election results to be certified. Trump equivocated. Biden said yes. This is where the comments about Proud Boys—especially “stand by”—and the failure to condemn right wing extremist groups in general become chilling if the following nightmare scenario occurs.

Trump appears to have lost the election. Mail-in ballots still need to be counted, however. Trump calls them fraud. Angry Biden supporters and left-leaning demonstrators take to the streets in protest. Trump calls on his right wing militia groups, such as Proud Boys and Boogaloo Boys, to quell what could amount to violence, precipitating a civil war of sorts. Martial law invoked, chaos, the end of democracy on the horizon.

It’s an untenable situation, but unless Trump lowers the temperature on mail-in voting and unequivocally squashes right wing extremism this could very well happen.