“Negligent homicide is the killing of another person through gross negligence or without malice…It is characterized as death caused by conduct that grossly deviated from ordinary care.” —USLegal 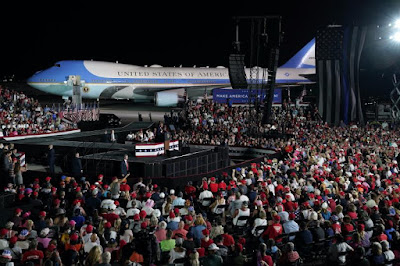 While the vast majority of negligent homicides are connected to the operation of motor vehicles, President Trump’s handling of the coronavirus appears to fit the definition.

From the outset, Trump has politicized the pandemic leading to U.S. deaths that have surpassed all other countries and recently set a U.S. record for new cases in one day with over 84,000.

Hospitalizations are over 41,000 and deaths average nearly 800 per day. Sixteen states had record one-day increases in new cases on October 23 and 11 reported a record number of hospitalized COVID-19 patients, according to Reuters.

Trump played the coronavirus down, promised its quick disappearance, minimized its effects, called it a new Democratic hoax, blamed Democratic governors and accused the media of exaggerating the severity.

How did we arrive at this point? Trump publicly eschewed face masks and his loyal base followed suit.  When common sense and scientific-based guidelines were handed down from the Trump’s administration’s own Centers for Disease Control and Prevention urged the use of face masks when social distancing was not practical, Trump and his base ignored the guidelines with misplaced bravado and machismo and a display of utter foolishness. #hocopolitics

In March, when the pandemic was in its nascent stages, I posted a piece, “Even the Coronavirus Can’t Avoid the Political Divide,”   recognizing how politicized the coronavirus had unnecessarily become.  Sadly, the divide has continued to this day with no relief in sight.

We later learned from audio clips of interviews that were used for journalist Bob Woodward’s new book Rage, Trump was aware of the severity of the virus back in January. He knew that it was transmissible through the air. He knew that children were at risk, too. But he never shared this knowledge with the American people because, in his words, he didn’t want the people to panic.

What he meant is that he didn’t want to rattle the markets as the country was about to embark on stay-at-home orders, lockdowns and business closures to prevent further spread of the virus that in effect, forced a deep recession. The stock market was his key metric in providing a rationale for reelection. This assessment was advanced by New York Times columnist Paul Krugman in “How Many Will Die for the Dow?” 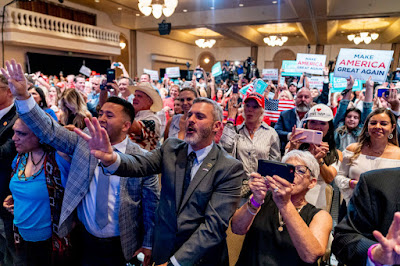 Trump and his cronies saw the virus as a blue states issue with people of color being victims at a disproportionate rate. Knowing that, he simply didn’t care and refused to risk his reelection prospects for people who weren’t going to vote for him anyway. He offered up the possibility that injecting disinfectants would be an effective therapeutic.

As we enter the 2nd and 3rd surge of the pandemic with the worst yet to come during the winter months, the spread has engulfed all the red states with some of those experiencing record-setting outbreaks. It’s a U.S. (and worldwide) problem, not just a blue state crisis as Trump and his Republican sycophants believed.

Accordingly, well over 220,000 died with an estimated 300,000 fatalities in the near future, and studies concluded that tens of thousands of deaths could have been avoided if the CDC safety measures were implemented two months earlier than they were. But Trump’s priority is clinging to power as he falsely claimed he himself saved over 2 million lives.

Though all of this could be a case for negligent homicide, what he has done since the Woodward revelations and his supposed contracting of Covid-19 solidifies the argument. Now with the election less than two weeks away, Trump is holding copious packed rallies with only those behind the podium wearing face coverings for the benefit of the TV cameras. The rest of the MAGA folks are not wearing them although 100,000 lives could be saved through February if 95 percent of Americans would wear masks in public, according to a new study.

Most insidiously, Trump continues to mock the virus. “Covid, Covid, Covid,” he chants with exasperation at these rallies or what are likely to be super-spreader events. He is fatigued by the pandemic being the central issue of the election. Trump encourages his followers to be similarly annoyed as if the pandemic was unleashed upon him to thwart his reelection.

He gave up on dealing with the virus. Dr. Anthony Fauci stated that Trump hasn’t attended a coronavirus task force meeting in months. Instead, he obtains his guidance from a radiologist, a guest on Fox News who is pushing the concept of herd immunity.

Trump has no plan. By contrast, Joe Biden outlined a plan to reduce the spread and gradually open up the economy by listening to the science and experts.

Trump  maintains “We’re turning the corner.” “There’s light at the end of the tunnel.” “A vaccine is near.”  “It’s going away.” “I’m cured.” All of these are outright lies and more cases and deaths will ensue as his MAGA rally crowds will contract the virus and spread it around to their families and communities. It is completely selfish to hold such risky events during a pandemic.

Meanwhile, a Stamford University study found that Trump's rallies have led to 30,000 Covid cases and 700 deaths.

Trump lies and people die. And for that, he should be charged with negligent homicide. November 3 will serve as the day to hand down the indictment.

Posted by Steve Charing at 3:55 PM

Very well written, Steve. We are living in a nightmare. Stay safe and well. Dana

He should also be charged for kidnapping. 545 children are in the US without a clue where their parents are in the biggest immigration debacle of all time. And all we hear from Trump is that it was the Obama administration that built the jail cells. Trump and Sessions should be tried in the International Court of Law for the kidnapping of foreign children and child endangerment of those same children.