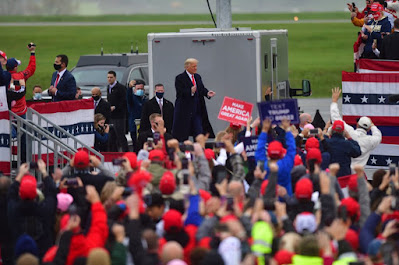 The best thing that happened to Joe Biden as we near the end of this presidential campaign is Donald Trump and his ubiquitous rallies. At these super-spreader events—several per day over the past few weeks—thousands of mask-less followers are packed shoulder-to-shoulder to witness Trump making the case for Biden in real time.  #hocopolitics

No, Trump isn’t praising Joe. He’s not telling those potential victims and spreaders of Covid-19 that Biden is the best man for the job. What Trump is accomplishing at these rallies is reinforcing what most of the world already knows: he has been the most incompetent, out-of-touch and out-of-his-mind president this country has ever endured.

To be sure, Biden has rightly focused his campaign on the coronavirus pandemic that is tragically heading towards the quarter million mark in U.S. deaths. The country has now hit spikes in cases that are higher than when the pandemic first spread in the country before stay-at-home mitigation efforts were underway. But Biden doesn’t need a prepared script at his events. All he has had to do is counter Trump’s inane assertions.

At his rallies Trump doesn’t express his vision for the next four years (mainly because he doesn’t have one). Instead, he echoes conspiracy theories and repeats his own personal grievances reflecting his paranoia and insecurities. He wastes everyone’s time re-litigating the 2016 election, pummeling our free press, makes false claims about the strong economy that the Obama administration handed him, and believes that running against Hunter Biden will gain him votes.

And then there’s the quest to attract suburban women voters. It’s been a disaster as he still sees women through the lens of the 1950’s. “Suburban women, please like me. I’ll get your husbands back to work.” If nothing else, he does provide a speck of comedy, unintentional as it may be.

Even the optics aren’t terrific. Scores of rally-goers in Omaha were literally left out in the cold with some hospitalized as the campaign failed to send buses to shuttle those folks back to their cars following the rally. Victims from the heat at a rally in Broward County, Florida, also needed medical care and hospitalization. So, when water was sprayed on the crowd to keep them cool, the perplexed Trump wondered out loud if those fire department personnel performing this task were “friend or foe.”

This embarrassing display for all to see is causing Trump to hemorrhage votes from suburban women and white college educated men. Moreover, the carelessness of his supporters by their not adhering to the Trump administration’s own health guidelines are likely adding to the surge in the coronavirus within their communities.

Donald Trump thrives on media coverage. That’s how he got elected in the first place. He has a pathological need to be the center of attention and command the daily news cycle. But Trump is no longer a novelty, a change from the ordinary politician.

As he reflects upon his defeat, he may at some point wish his rallies during this campaign were never covered by the media and how they helped his opponent more than himself.