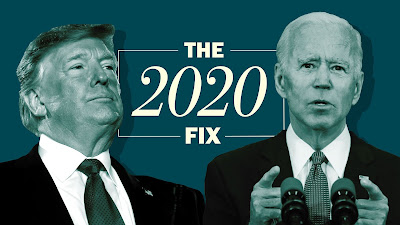 There was little doubt among Democrats that the rush to get Amy Coney Barrett confirmed and seated on the Supreme Court before the election had less to do with overturning the Affordable Care Act than to ensure the re-election of President Donald Trump. "Moscow Mitch" McConnell, the obedient leader of the Senate, carved out the path for this plan to succeed so that the court would have a whopping 6-3 majority.

Trump's plan, if he could not win the election outright, would bring challenges to the validity of mail-in ballots in key battleground states and have these cases put before the Supreme Court--HIS court, just like HIS generals, HIS attorney general, etc.

Trump and his cabal of thieves have blatantly tried to curtail and suppress the votes. In addition, he ordered the postal system to be sabotaged to prevent mail-in ballots from arriving in time. In Harris County, TX, Republicans have asked an extremely partisan judge to throw out over 100,000--mostly Democratic--votes because of curbside voting though the Secretary of State approved that method.

Other voting barriers have been put in place around the country, and we see armed vigilantes intimidating Biden voters at precincts with little action to stop this tactic.

For good measure, a belligerent caravan of Trump supporters in pick-up trucks complete with oversized Trump flags harassed and intimidated a Biden-Harris campaign bus 5hat was peacefully traveling along a highway in Texas. Expressing  disdain for such boorishness, Trump tweeted, "I LOVE TEXAS."

The major factor that is igniting this attack on our democracy center on Trump's desperation not to lose. If he goes down in defeat, not only his pathological, narcissistic ego would take a blow the likes of which he's never seen, but he stands to face criminal exposure  from the New York State Attorney General and the federal Southern District of New York on financial-related crimes including tax fraud and wire fraud among others.

Therefore, Trump has no choice but to remain in power. He and his family are raking in millions of dollars while in office, so the bunk that is spread among is supporters that he has donated his salary is pure garbage.

What we are witnessing is a direct assault on our democracy. Undisciplined as Trump is, he allowed himself to admit it.

See the clip below.

Here's the clip from Trump's Reading, PA rally: “If we win on Tuesday or — thank you very much, Supreme Court — shortly thereafter…”pic.twitter.com/erqh5uNMsk

Daniel Dale, a fact-checker from CNN said the video was taken out of context. " Trump had just been (wrongly) blaming the Court decisions for us not having a winner on Election Night - in this line, he was sarcastically saying, like, thank you very much Supreme Court, we’ll now have to wait. Wasn’t saying Court would make him president," Dale said.

Nonetheless, I maintain that the plan is to throw the election to the Supreme Court so that the will of the people be overturned.

Posted by Steve Charing at 6:10 PM