Peril Ahead: A Review of New Woodward-Costa Book 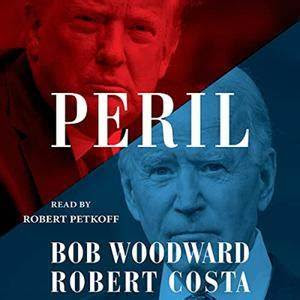 In the seemingly endless parade of books about Donald Trump, a new entry by multiple award winning best-selling author Bob Woodward and his Washington Post colleague Robert Costa, offer a new take on the topic. Their Post cohorts Phillip Rucker and Carol Leonnig in the recently  published bestseller I Alone Can Fix It: Donald Trump’s Catastrophic Final Year focuses on Trump from the onset of the pandemic through Joe Biden’s inauguration.

Peril provides insight into the thinking of Donald Trump as well as his associates, members of his administration, military leaders and political allies. The period covers the months leading up to the election to the present (Summer 2021) but it also includes the presidential campaign and the nascent presidency of Joe Biden.

The title I Alone Can Fix It is a quote lifted from Trump’s acceptance speech at the 2016 Republican National Convention.  Peril is derived from Joe Biden’s inauguration speech where he said, “We have much to do in this winter of peril.”

Both books reflect solid sourcing from these experienced and highly regarded journalists involving tons of recorded interviews and documents to back up their words. Therefore, what you read, you can take to the bank.

While Peril devotes about half the book to Trump and the other to Biden, I found the Trump chapters more captivating and dramatic even though much of what is written is generally well known. This is no surprise given that Biden did not incite an insurrection, continues to lie about the election, has a larger than life standing within his own party, and is prone to salty temper tantrums. Moreover, the military leadership does not fear that Biden would start a war on a whim or deploy soldiers to control lawful demonstrations by the citizenry.

Yet, if you’re looking for a book that is filled with jaw-dropping salacious reveals, Peril is not the one. Woodward and Costa, nonetheless, get behind the scenes and offer fascinating glimpses into Trump (and Biden) meetings and phone calls and delve into the relationships between the principals and their aides, congressional personalities and others, much of which had not been brought into the sunlight previously.

As with I Alone Can Fit It, Peril is pretty much chronological in structure. Presented in a somewhat choppy cadence, Woodward and Costa hop back and forth to the early stages of Biden’s campaign to the Trump campaign.  The election itself and all the mishigas and danger that ensued as a result of Trump’s denial of the results, January 6 and the run-up to the inauguration are described in appropriately vibrant fashion.

Trump and Graham have a beguiling dynamic. They are good friends and golf buddies who speak frequently on the phone. Despite Graham’s best efforts, he cannot move Trump away from his continuing lie that the election was stolen. He pleaded with Trump that the party needs him to move on from this in order to win back the House and Senate. Graham is blunt with Trump whereas others can’t get away with it.

“If we come back in 2022 and recapture the House and Senate, you’ll get your fair share of credit. If we fail…Trumpism, I think, will die. January 6 will be your obituary.”

Trump remains unmoved to this day.

His pique with Kevin McCarthy is also notable.

“This guy called me every single day, pretended to be my best friend, and then, he fucked me. He’s not a good guy,” Trump said in reaction to McCarthy’s talking him down about election fraud.

Likewise, the relationships between Biden and McConnell, Senator Bernie Sanders, Senator Joe Manchin and Rep. Jim Clyburn are intriguing. One interesting reveal is that Clyburn, an African American, had worked with collegially with segregationist Senator Strom Thurmond in Congress.

The scurrying to prove the election was stolen that reflect the silliness of the case manifested by the bizarre performances of Trump’s lawyers is one of Peril’s highlights. The run-up to and including January 6 is also chronicled. The threat to democracy was genuine and unfolding in real time. Peril captures the essence of that threat but does not convey the wrenching terror the individual congressmen and senators experienced during those horrific hours.

Many wonder what Trump was doing while the riots were taking place. The House Select Committee will be looking into that very question in the coming weeks. But the authors indicate that Trump was alone in a private dining room in the White House watching the events play out on TV. We also learn the exact location where Speaker Nancy Pelosi had been whisked away during the siege.

Much of the reporting about Biden centers on his personality and character. It is in stark contrast with Trump’s belligerent, me-only attitude. Peril adroitly captures Biden’s self-reflection, and his memory of his son Beau who died from brain cancer is constantly with him and helps guide him in key decision-making opportunities.

Biden’s priority when he took office was to end the Covid-19 pandemic by accelerating the vaccination rate in the country. He also spent a lot of effort and perhaps political capital trying to get a relief bill through Congress. In that regard, his interactions with Manchin were intense.

The summer discussions surrounding the potential withdrawal of troops from Afghanistan that eventually took place seem prescient as we witnessed the chaos later on after Peril was printed. Opposed to the endless war in Afghanistan, Biden’s incentive was to end it now. Ultimately, the mess proved not to be his finest moment.

The detailed accounts in Peril especially the behind-the-scenes conversations make it a thrilling read. However, notably omitted were such events as Trump’s risky and showy ride-around outside the hospital where he was treated for Covid putting his secret service agents in peril, so to speak.

Trump’s phone call to pressure the Georgia Secretary of State to come up with enough votes to overturn the state’s official tally was also not included. This is surprising given that the Washington Post had broken the story.

Also, not discussed in any length was the delay by the Trump people in helping the Biden team transition. I saw only one reference to this unprecedented delay: “Cooperation on the transition was spotty at best, even obstructionist.”

Nonetheless, the reporting was meticulous in most areas, and Peril provides a concrete historical record of what transpired during 2020-21. I fear, however, there may be more peril to write about in the future.

Posted by Steve Charing at 7:17 PM