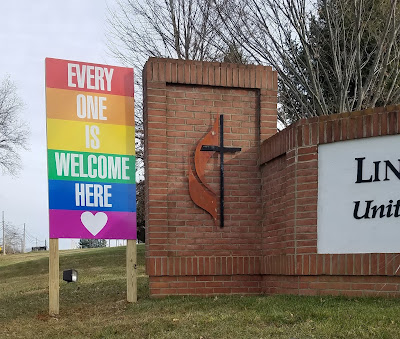 If you drive east on Route 108 just beyond the River Hill Village Center in the Clarksville area of Howard County, Md. you can’t miss the 3 ft. by 6 ft. sign in front of the Linden Linthicum United Methodist Church. That sign boldly proclaimed, “EVERY ONE IS WELCOME HERE” with rainbow-colored decorations on it.

Well, you will miss it now, at least for the time being.

Apparently, not everyone buys into the message of inclusion. Under the cover of darkness on the night of February 24, a person or persons used a chainsaw to cut through the substantial wooden posts supporting the sign adjacent to the church located at 12101 Linden Linthicum Lane and removed it.

Gayle Annis-Forder, pastor of the roughly 500-member congregation church promptly took to the Clarksville Happenings group on Facebook—one that typically includes member posts requesting information on contractors, babysitters, lost pets and the like—to explain that it was not the church that took down the familiar sign but someone else had done the deed. She pointed out that the sign had been defaced last June and despite its unauthorized removal this time, “LLUMC still believes what the sign said, that everyone is welcome here.”

A whopping total of 300 reactions appeared along with 150 comments all supporting Pastor Gayle and the church and denouncing the act of vandalism, which was reported the next morning to Howard County Police. Many believe this act should be investigated as a hate crime.

Bob Ford, a member of the Howard County Human Rights Commission, stressed the importance of reporting hate bias incidents to the police. “Even if a crime is not committed, being the victim of racial, religious, ethnic or sexual orientation and gender identity slurs should be reported to the police as hate bias incidents,” Ford explains. “Data must be compiled by law enforcement concerning these incidents so that measures can be implemented to reduce them in the future.”

In this matter, however, a crime was committed as private property was vandalized and removed.

“I’ve always loved that sign, big, bright, and right up front for all to see,” Charlotte Gammel Wojcik posted as an example of the type of comments displayed in response to the incident. “I’m sorry some jackass ruined it. I hope you’ll replace it because I believe many who saw it felt supported, even if they never entered the church.”

“There is no doubt in my mind that you and your congregation live the values represented by your beautiful and welcoming sign. Reading these comments warms my heart knowing there are so many in our community who will not allow this to stand. We will replace the sign and it is my hope that we can make the sign replacement an event that will allow us all to come together and celebrate our love for one another. Later, Jung told me, “It was a despicable act of hate and vandalism.”

Janssen Evelyn, who is opposing Jung in the Democratic primary in that district, weighed in as well.

“The fact that someone went there with a chainsaw meant that they were intentional in their hate. We must be more intentional than that individual in our resolve and in our love. As a community, we must not accept hate. This is our watch, and we must show that everyone is welcome in our community.”

Pastor Gayle points out that although the sign contained rainbow colors, the welcoming message is not exclusively aimed at members of the LGBTQ+ community. She noted that members of that community would recognize the color scheme and understand that they are welcome. The message is broader, however. “LLUMC welcomes everybody.”

Indeed, the church’s Statement of Values and Inclusion on the website reflects that point.

“As followers of Jesus, we the people of Linden Linthicum United Methodist Church are committed to welcoming and loving everyone as he did, without regard to ability, race, ethnicity, gender, gender identity, sexual orientation, family make-up or religion. We embrace the principles of love over hate, inclusion over bias, respect over prejudice, equality over bigotry, and caring for all. Therefore, we reject the targeted hate messages and exclusivist ideologies advocated by any group. Such messages are antithetical to the inclusive message of Jesus. We are committed to living out non-discriminating love in our lives, worship, study and service.”

Nonetheless, the LGBTQ+ community especially transgender kids have been under attack and would find this church a spiritual safe space for them and their family members to receive support. As an example of the assault on members of the community, Republican Senator from Florida, Rick Scott, laid out a widely panned agenda that says that there are only two genders, failing to acknowledge the reality of a gender identity spectrum. Moreover, Florida passed legislation dubbed the “Don’t Say Gay” bill whereby the subjects of sexual orientation and gender identity cannot be discussed in primary grade levels.

Recognizing these developments in Florida and Texas specifically, Becca Niburg, an immigration attorney and a candidate for the Maryland House of Delegates from Howard County, issued the following statement:

“The sign referenced states that all are welcome across a rainbow background, specifically signaling inclusion to those in the LGBTQ community. Especially under the backdrop of the governor of Texas persecuting Trans kids, the removal of the sign signifies hate and division in our community and those who perpetrated the destructive act should be punished to the full extent of the law both criminally and civilly. I stand with the LGBTQ community and the Church, ready to assist and support.”

Adds Byron Macfarlane, the County’s Register of Wills and the first openly gay elected official in Howard County, “This is a reminder that Howard County isn’t immune to criminal acts of hate and intolerance. We have to reject hate in all its forms, call it out when we see it, and stand together. Our amazing rainbow LGBTQ+ community and our tremendous allies, including so many faith partners, must remain vigilant and undeterred as we build enduring relationships based on love and solidarity. These criminals can take down a sign, but they’ll never stop the march to true and lasting equality.”

Pastor Gayle has been moved by the support she has received from the community and by other faith leaders in Howard County. She indicated a new sign will be ordered and a celebration outside the church whereby community members can join in and observe the new welcoming sign is under consideration.

Photo of sign prior to the incident courtesy of LLUMC

After Easter (which is the 17th) We’re getting trees taken down on the 13th to give a sight line, and don’t have the cameras up yet. The sign is ready and we just need to get the site prepared. This is all a lot more steps than it seemed it would be. It’s all good, though. People continue to be lovely.