Toby’s Puts the Wonderful in ‘It’s a Wonderful Life’ 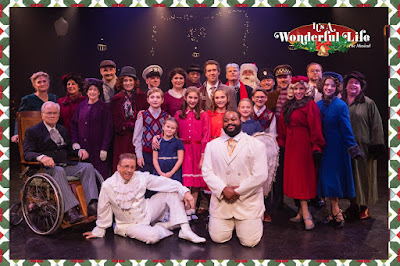 The musical version of It’s a Wonderful Life returns to Toby’s, The Dinner Theatre of Columbia, as its featured holiday production. With its heartwarming charm, the musical hews closely to the Frank Capra film classic starring Jimmy Stewart that has been a Christmas staple on TV for decades.

Under the direction of Toby Orenstein and her two Assistants to the Director Mark Minnick and Tina Marie DeSimone, the production brings to life the loveable and not-so loveable characters from the film—and in living color, no less. From a book and adaptation by Michael Tilford and with a sweet score and clever lyrics by David Nehls, Toby’s iteration of this classic is perfect for the holiday season (though the connection to Christmas doesn’t directly take place until the second act) and a joyful, needed escape from the times we are living in now.

Led by the stalwart efforts of the multi-talented Justin Calhoun as the central character George Bailey, the entire cast is outstanding in delivering an energetic, well-staged and expertly performed production.

The overarching theme of the story that takes place in the small town of Bedford Falls spanning the 1920s to 1940s is that life is worth living no matter how bad things may appear. Every life has value if you do good deeds that touch upon others.

To be sure, George Bailey did good deeds starting at a young age. He saved his younger brother Harry’s life from drowning. He prevented a pharmacist, Mr. Gower, from accidentally adding poison to a prescription. He reluctantly postponed plans to travel the world to take over his father’s Building and Loan business after the elder Bailey died. He kept the business open despite the hardships of the times and the pirating efforts by the town’s owner of everything else in Bedford Falls, the villain Mr. Potter.

Along the way and in the face of these challenges, George found love and married Mary. They began a family.

But things went sideways at the Building and Loan as $8,000, which was supposed to be deposited in the bank by George’s Uncle Billy, went missing. It had been found by Potter who kept it.

Frantic and unable to find the money, the business was under a threat of being shut down as a result of a review by a bank examiner, Mr. Carter. George was facing imminent arrest for malfeasance and other charges. Predictably, Mr. Potter refused to grant him a last-ditch loan to overcome his quandary. He told George that he “is worth more dead than alive.”

Unable to wrest himself from this plight, George took out his frustration on his wife and children. In despair, he climbed on top of a bridge to jump and take his own life. His guardian angel, Clarence, under the mentorship of a winged angel, Joseph, intervened and then George said he wished he was never born.

Clarence, in pursuit of earning wings of his own, proceeded to demonstrate how things would have developed had there been no George Bailey. His brother Harry Bailey would have died from drowning rather than being a national hero in the war. Mr. Gower would have been punished for the poisoned prescription. The town would be called Pottersville as Potter would have owned everything. Nobody in the town including friends knew who George was.  Mary would not have married, and the three cute children would have never been born.  The message worked, and everything eventually played out for a happy ending.

"Toby’s iteration of this classic is perfect for the holiday season..."

Scenic designer David A. Hopkins and Properties Designer Shane Lowry crafted a simple set depicting the town of Bedford Falls with the use of streetlamps surrounding the in-the-round stage and other touches on the walls. The use of the balconies and an excellent facsimile of a bridge from which George intended to jump enhance the aesthetics. Numerous set pieces are employed, such as a bank window and desks,, and were moved on and off the stage as efficiently as Santa’s deliveries on Christmas Eve. The transformation from bar stools to grave stones with just a flick of the wrist is particularly well done.

While there isn’t an abundance of dancing throughout the show, Tina Marie DeSimone’s up-tempo choreography hits the mark. The dancers excel in such numbers as “Syncopation Rag,” “A Very Special Occasion,” and “This Round is On Me.”

Reenie Codelka led the six-piece orchestra on the night this show was reviewed (Ross Scott Rawlings takes the baton on other performances) and supported the vocalists very well without overpowering them.

Lynn Joslin’s Lighting Design and Mark Smedley’s Sound Design as well as the period costumes designed by Sarah King contributed to the realistic atmosphere of the time.

Justin Calhoun, in a tour de force, excels as the earnest and well-intentioned George Bailey. His marvelous tenor voice delights in “I’m On My Way,” “Lullaby,” and “I’m At Home” among others. Mr. Calhoun’s stellar acting skills are showcased in this demanding role. Convincingly playing a full range of emotions from bliss to anxiety, to enthusiasm, to love, to generosity, to frustration, to anger, to despair, to triumph, Mr. Calhoun is superb. Watching his performance alone is worth the price of admission. Bravo Justin Calhoun!

Robert Biedermann channels his inner Lionel Barrymore as the wheel chaired-bound Scrooge-like villain, Mr. Potter. Mr. Biedermann effectively portrays the gruff, miserly, mean and joyless tycoon to the hilt without going over the top, which would have been easy to do. A few in the audience did boo him (hopefully good-naturedly) at curtain call to signify how effective Mr. Biedermann performed.

For comic relief, one can always count on Toby’s resident cut-up David James. He plays the part of Clarence, George’s guardian angel in his quest to earn wings, with mischief and precise comedic timing. As his mentor Joseph, DeCarlo Raspberry is more than up to the task in the role of keeping not only Clarence in check but also Mr. James. Neither is an easy task.

This duo offers the teachable moments in the story and binds the events effectively. Sadly, we don’t get the chance to enjoy Mr. Raspberry’s amazing singing voice in this show, but Mr. James does a fine job in the spirited “Ya Gotta Have Wings.”

Lovely MaryKate Brouillet plays Mary, George’s wife with tenderness. She rides the rollercoaster of George’s journey of emotions and conveys her devotion to him and her children. As she has demonstrated in other Toby’s productions, Ms. Brouillet commands a beautiful singing voice. “My Wish is You” and “Mary’s Sequence” stand out. Her vocals shine in a duet with Mr. Calhoun in ‘I’m at Home.” The Bailey children are being portrayed by Jana Sharbaugh, Lucas Rahaim and Gwyneth Porter on this night with Ava and Mia LaManna and Jackson Page during other performances.

On a personal note, it was heartwarming to see Jane C. Boyle, Tina Marie DeSimone and AJ Whittenberger return to the Toby’s stage. They may have been gone for a while for various reasons but their talent did not subside at all. They are terrific.

Adding to a long list of triumphant shows at Toby’s is It’s a Wonderful Life. A very talented cast and crew under excellent direction makes this a pleasant experience with a much-needed happy ending to enjoy during the holiday season. And bring your appetite to partake in Toby’s scrumptious show-themed dinner buffet.

Running time. Two hours and 45 minutes with an intermission. The show begins 15 minutes earlier than usual.

Not everybody can be fortunate enough to have a guardian angel help them navigate through the trials and tribulations of life. And this is especially significant during the holidays when many feel lonely and detached.  The lessons taught in It’s a Wonderful Life are valuable in reminding audiences that all lives have value no matter how bad things seem to be. To call the Suicide Prevention Crisis Hotline, dial 988.

Posted by Steve Charing at 4:33 PM