There must be something in December’s air 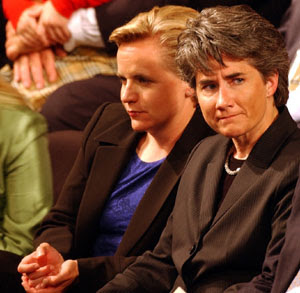 By Steve Charing
Senior Political Analyst
Maybe it’s the unusual balmy weather we’re experiencing or that the Ravens seem unstoppable. But whatever the reason, there have been some odd happenings in the political arena during December. Here are just a few:
MARY’S HAVING A LITTLE LAMB. The news that lesbian Mary Cheney is pregnant is a study of irony. I’m happy for her, believe me. But because of her Republican Party’s success in trashing same-sex marriage in Mary’s home state of Virginia and elsewhere, her partner Heather Poe will not enjoy the same legal relationship with the baby as heterosexual couples can have with theirs.
During the 2004 presidential campaign when the GOP bludgeoned gay marriage, Mary Cheney, who was an aide for her dad, was silent and let her party drive a cynical wedge into the electorate to win. Only when she promoted her flopperoo of a book did she finally speak out against a constitutional amendment banning same-sex marriage. Too little, too late. Her child will not receive the same protections and rights as the children of heterosexuals.
Dick Cheney should have used the same degree of influence he had in launching a preposterous war and developing an oil companies-friendly secretive energy policy in staving off the GOP’s opposition to same-sex marriage. But, alas, he didn’t. And Mary and Heather and baby will suffer the consequences.
APPEALING COURT. The Maryland Court of Appeals heard oral arguments from the gay plaintiffs and the state in the case that is trying to overturn the state’s marriage law. Despite the high passions on both sides, there was an eerie, surprising calm both inside and outside the courthouse. The justices seemed so laid back one has to wonder if they had already decided on the issue prior to the proceeding. Outside, there were no jeering or other demonstrations.
My guess is that the opposition is laying low pending a ruling, which is expected during 2007—probably in March or April. Look for a New Jersey-type verdict that would offer civil benefits to same-sex couples but not use the term "marriage." They will order the General assembly to fine-tune the implementation of the decision. That’s when things will heat up.
DWYER’S EEKED OUT VICTORY. Noted homophobe Delegate Don Dwyer managed to win re-election by just 25 votes. Whew! From a strategic and public relations perspective, this isn’t all that bad. Perhaps Equality Maryland’s Executive Director Dan Furmansky said it best: "While we would all obviously prefer to see Del. Dwyer collecting an unemployment check rather than returning to the General Assembly, there is truly no better face of the anti-gay movement in Maryland," he told the Washington Blade. "Del. Dwyer is zealotry personified."
OBAMA FEVER. The buzz surrounding the potential presidential candidacy of Barack Obama is startling. Despite the fact he is a minority and has such a thin resume, I believe he has an excellent shot—not only the Democratic nomination, but also the presidency itself. In a future column I will explain why. Get on the bandwagon now!
MINCING WORDS: Sometimes it is a good idea if politicians think of what they say before they say it. In discussing the need for broad tax reform in Maryland, openly lesbian Delegate Maggie McIntosh made a curious comment as reported by C. Fraser Smith in the Sun: "Why do we keep poking our fingers in holes in the dikes?" Hmmm.
STROKE OF LUCK. Democratic Senator Tim Johnson (SD) was stricken with what originally appeared to be a stroke but later determined to be a congenital arterial malformation that had caused blood vessels in his brain to burst. While he remains in critical but improving condition, there is widespread speculation concerning the fate of Sen. Johnson and the balance of power that was to tip towards the Democrats come January.
Should Sen. Johnson die or resign from office, the vacancy would be filled by the Republican governor of South Dakota. If he selects a member of the GOP to replace Sen. Johnson, the Senate would be split down the middle, 50-50, with VP Cheney breaking the tie. That would mean the coveted chairmanships of the senate committees would fall to Republicans and the re-emergence of the constitutional amendment. Ugh!! Let’s pray for the Senator in more ways than one.
Posted by Steve Charing at 10:49 AM No comments:

Injustice anywhere offends all of us

Leonard Pitts' column condemning all forms of discrimination is right on the mark ("Black or white, gay or straight, discrimination is still discrimination," Opinion • Commentary, Dec. 17).
Mr. Pitts accurately drew a correlation with the struggle for equal rights for gays and lesbians and the black civil rights movement of the 1960s.
During that era, many gays and lesbians joined arm-in-arm with their black brothers and sisters in taking part in marches in the South.
They also pushed for black voter registration in Selma, Montgomery and other campaigns in the civil rights movement in an effort to expand democracy to all of America's citizens and foster social justice. And often they risked their lives in the effort.
While there are African-Americans who are loath to equate the two movements, a significant number of black civil rights leaders, elected officials, prominent clergy and others recognize the contributions of gays and lesbians in the black civil rights movement and see gay rights as part of the broader quest for human rights.
The Rev. Jesse Jackson, the Rev. Al Sharpton, Kweisi Mfume, Julian Bond, Rep. John Lewis and the late Coretta Scott King come to mind.
Mrs. King, who knew a thing or two about civil rights, once said, "I still hear people say that I should not be talking about the rights of lesbian and gay people and I should stick to the issue of racial justice. ... But I hasten to remind them that Martin Luther King Jr. said, 'Injustice anywhere is a threat to justice everywhere.'"
Mr. Pitts echoes Dr. King's view that discrimination of any kind is unjust, and I applaud him for that.
Steve Charing
Clarksville
Posted by Steve Charing at 12:06 AM 1 comment: