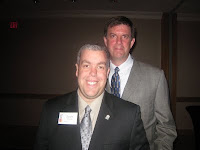 By Steve Charing
Scott Bowling (picured in foreground) knew the odds were stacked against him when he announced his candidacy for Alderman in Annapolis' 3rd Ward last January. He is a white man running in a heavily-populated African-American ward that covers the southwest corner of Annapolis and includes the neighborhoods of Parole, Homewood, Southwoods, Greenbriar, Annapolis Gardens, Bowman Court and Fairfax.
He is a Republican in a ward that has an 8 to 1 Democratic edge.
And he is openly gay.
Despite these daunting challenges, things were looking bright for Bowling heading towards the election. He waged an issues-oriented campaign as much against the status quo as he did against incumbent Democrat Classie Gillis Hoyle.
"Annapolis is headed in the wrong direction and I have decided to run for Alderman of the 3rd Ward to help bring an end the apparent paralysis at City Hall," said Bowling when he announced his candidacy. "While our nation and its citizens are trapped in a fiscal crisis, our leaders at City Hall are focused on frivolous laws, resolutions and analysis that do little to improve the quality of life for their residents. The people of Annapolis deserve better."
Bowling, a Mortgage Banker with Wells Fargo, didn’t run on gay rights issues nor did he draw special attention to his sexuality; he was a hundred percent focused on such local matters as taxes, fiscal restraint and planning. But at the same time he never shied away publicly from his sexual orientation. His life partner, Dave Miller (rear in photo), is the campaign’s treasurer.
Recent polls predicted a razor-thin contest with Hoyle. Bowling’s sexual orientation didn’t surface much until he picked up key endorsements, notably former candidate for mayor Democrat Trudy McFall, the local Firefighters Union and the Annapolis Capital. Then there were more frequent attempts to raise the issue of his being gay, Bowling told OUTloud, in an effort to instill fear in the Ward’s voters. "They tried to associate me with the Sam Shropshire incident implying that all gay men are pedophiles."
Shropshire, an Alderman in Ward 7, is accused of fondling a male Navy midshipman last spring, and a trial date is set for February. He has repeatedly denied that he’s gay. "The scandal has stained the city," said Bowling "and they tried to link me to it."
In the days leading up to Election Night, the Hoyle campaign accused the Scott Bowling team of removing Hoyle’s campaign signs. This was immediately denied by Miller, and in a message to supporters said, "There is no room for childish issues such as sign removal in an adult campaign on important matters."
Then the ugliness deteriorated more just 48 hours prior to the election. The following statement was issued by the Bowling camp:
"An anonymous and illegal flier is being distributed in Ward 3. The flier is filled with hatred and bigotry intended to motivate the historically African-American communities within Parole to vote for Democrats Josh Cohen and Classie Hoyle. Scott Bowling, a candidate for Alderman in Ward 3 has called on the U.S. Attorney General's Office as well as a Maryland Attorney's General's office to investigate this as a hate crime and as a violation of the Voting Rights Act."
"I am disappointed that in 2009 there are factions within Annapolis that insist on engaging and bringing this type of racist and hate filled activity into our City Elections, said Bowling.
"Such hateful language can very quickly lead to violence. We, as a community, must seek out the originators of these hateful statements and turn them over to authorities. There is no place in any City, State or society for such hateful and abusive language. I denounce such activities and hope that my opponent as well as the leadership of both political parties would do so as well; there is no room for hatred, bigotry or this type of politics in Annapolis." He added, "I am hopeful that the citizens of Annapolis and Ward 3 will rise above such a blatant attempt to prey on people's ethnic, racial, and religious fears."
Bowling told OUTloud that the flier contained specific references to his being "homosexual." It reminded voters of the Schropshire scandal and warned that electing such a person would be dangerous to children.
He said that Hoyle did not condemn the flier and refused to when confronted by other members of the media. Ms. Hoyle did not return a phone call to OUTloud requesting a comment on the flier.
Scott Bowling lost by 130 votes pending the absentee ballot count, which will not affect the ultimate outcome. He said the flier was definitely responsible for his defeat as some voters told him it changed their minds.
Posted by Steve Charing at 11:04 AM