There Used to be a Gayborhood in Mt. Vernon

As soon as the Hippo announced its closing in 2015, members of Baltimore’s LGBTQ community began seeing the handwriting on the wall regarding the “gayborhood” in the Mount Vernon area. The state’s largest dance bar and night club closed its doors several months later with the edifice being converted to a CVS store. That was the first piece to fall.

Two years later, as first reported here Don Davis, the owner of the second largest gay club in town, Grand Central, indicated the establishment would be put up for sale. Fast forward to 2020, under new ownership, Grand Central closed its doors this past summer amid the COVID-19 pandemic, and a new office complex would reside where the club once stood.

On its website, the Grand Central Management team wrote:

After over 30 years of serving the community, Grand Central sadly has shut its doors. Given the overwhelming challenges created by the pandemic and our beverage-only driven business, the operations were not sustainable as we prepare for the next chapter. We appreciate all of our customers and supporters and thank them for their long-time loyalty; we look forward to celebrating the institution’s legacy in the future development. We strongly believe in the Mt. Vernon community and will always drive to be stewards of quality, growth and retention to ensure the neighborhood’s character stays true to form.

The gut-punch reality of this latest occurrence was jarring with the 30 year-old Grand Central building succumbing to the business end of a wrecking ball. But the memories of this place did not vanish in the rubble of what was once a proud and glorious safe space for the LGBTQ community.

The pulsating beats on the often crowded dance floor were high tempo, driving energy levels sky-high. The needlessly loud music in the saloon area on the weekends, however, rendered attempts at conversation a monumental task.

The famous red, white and black parties where imaginative patrons dressed up in dazzling, clever attire to fit the theme were experiences to savor.

There were fundraisers and other events

for the benefit of the community. Ravens watch parties took place on Sundays. Karaoke, drag shows, go-go dancers, you name it, were part of Grand Central’s grand entertainment. On two occasions piano bar set-ups were tried to create an alternative vibe but those was short-lived.

The upstairs loft in the adjacent but attached building was set aside for lesbians to congregate and socialize, and when the original Eagle closed, that area was inhabited by the leather community.

Who can forget that out-of-control pickup truck that careened into the outside tables and building entrance and splashing a river of white paint on the sidewalk and walls of the bar? And, of course, there were the ongoing public grievances the owner had with a string of mangers that were laid bare on social media.

Grand Central with all its quirkiness and merriment had been a good compliment to the Hippo when they both competed for the attention of our diverse community. But now they are gone.

The smoking ban, the advent of online dating and hookup apps, the increasingly difficult parking situation and a greater willingness of the younger generation to patronize “straight” bars took its financial toll on both the Hippo and Grand Central—the bulwarks of the gayborhood.

However, other developments had an adverse effect on the gayborhood.

Years ago, we lost the iconic LGBTQ Lambda Rising bookstore—another casualty of the internet. The Community Center left its Mount Vernon birthplace and headed to Station North/Old Goucher slightly less than a mile away from the gayborhood in order to provide targeted services to low-income and people of color not prevalent in Mount Vernon. Along with it went the Pride parade and block party, where every year thousands used to pack the intersection of Charles and Eager Streets and surrounding streets to eat, drink and be merry while live entertainment added to the high-energy atmosphere.

Other establishments closed as well. Flavor, a lesbian-owned bar on nearby Centre Street known for its community-oriented fundraisers, dancing and good eating, is no more. After 25 years of operation the City Café, a gay-owned, popular restaurant, which was situated a block away from the Hippo, closed for good in the Spring.  While many LGBTQ folks made a habit of enjoying lunches and dinner there, patrons from the Baltimore Symphony Orchestra, a few blocks away, also partook. With the Symphony closing during the pandemic and the closings of the nearby bars, the impact on the City Café had to be devastating. 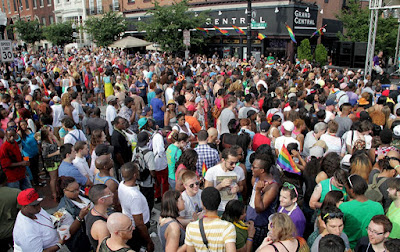 We also lost a favorite of mine, the Mount Vernon Stable on Charles Street, another nice, gay-friendly restaurant, which closed its doors after many years.

Remaining are the two oldest gay bars in the gayborhood, The Drinkery and Leon’s, with their own claim to memories over the years. Both are closed now because of the pandemic. It remains to be seen if and when they will re-open.

On the bright side, the gay owners of the chic new LGBTQ-friendly Manor Restaurant and Ultralounge that inhabits the old Brass Elephant restaurant opened a month before COVID hit. Undaunted, they plan to re-open as soon as they are permitted.

Over five years ago on a typical Saturday night, the gayborhood was alive and teeming with crowds ready to party or dine or both. People sat outside of the City Café enjoying their meals. Folks meandered to any combination of the four bars in the immediate vicinity. Lines snaked outside the Hippo; Grand Central was hopping.

Yes, there used to be a gayborhood in Mount Vernon but no longer. The pile of rubble and debris on the Grand Central site symbolizes the gayborhood’s sad demise.

the smoking ban was negligible. the other reasons. dating apps, and wider acceptance our community in the public at large did play a huge part in the demise.

the gay community in Baltimore also is much smaller than it was years ago.
I don't think the smoking ban had any impact. Tons of straight bars did just fine, and continue to do so or at least pre covid. The other reasons are valid.

Anonymous said...
This comment has been removed by a blog administrator.
5:52 PM