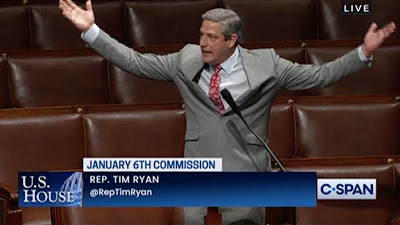 Consider this: the Democrats control the Senate albeit by the margin of the vice president. Yet, who do we see more of on TV or read about—Majority Leader Chuck Schumer or Minority Leader Mitch McConnell?

The Dems also control the House of Representatives by a shrinking margin, but who has dominated the recent news cycles—Minority Leader Kevin McCarthy of Speaker of the House Nancy Pelosi?

The Democrats have their standard bearer in the White House in Joe Biden, but why is it the former president Donald Trump seems to get more notice, even without being on Twitter?

The media is still infatuated by everything Trump and how his acolytes obey his whims. Whether they want to or not, the Republicans continue to dominate the news, and the Democrats are having a tough time getting a message across much less news coverage. That changed for a news cycle on May 19 with Congressman Tim Ryan, a centrist pro-worker Democrat of Ohio.

The measure voted on by the House on May 19 that would establish a bipartisan commission to look into the run-up to and the ensuing events of January 6 was the backdrop.  While the FBI proceeds to nab hundreds of people who took part in the insurrection, a commission would be able to do a deep dive into the role Trump played in inciting the riots and as important, his slow-roll in stopping the violent mayhem. What was Trump doing as the riots unfolded? Why did it take him so long to tell his supporters to go home? What was the substance of the phone conversation between McCarthy and Trump?

As it turned out, only 35 Republicans in the House voted to establish the commission but it passed on the strength of unanimous Democratic support. Alas, it will die in the Senate because a commission would keep the story alive into the mid-terms and you know how McConnell can’t bear being in the minority yet again.

Prior to the vote, Rep. Tim Ryan who announced he will run for Ohio’s open Senate seat in 2022, laid into those Republicans who could not muster the courage to look into the fateful day when their workplace was attacked and rioters were looking to hang the vice president.

In a fiery speech, Mr. Ryan excoriated his Republican colleagues.

“To the other 90 percent of our friends on the other side of the aisle, holy cow! Incoherence! No idea what you’re talking about!” Ryan said. “Benghazi! You guys chased the former secretary of State (Hillary Clinton) all over the country. Spent millions of dollars! We have people scaling the Capitol, hitting the Capitol Police with lead pipes across the head, and we can’t get bipartisanship?

The video of his speech can be found here.

It’s about time a Democrat rose up and brought the horrors of January 6 into focus. Too many stand on the sidelines and allow the GQP to seize the stage. Former Bill Clinton adviser and political pundit James Carville was right on point urging Democrats to use January 6 as a bludgeon against those Republicans who voted against impeachment of Trump and voted against conviction.

“They have to make the Republicans own that insurrection every day,” Carville told Vox last month in an interview. “They have to pound it. They have to call bookers on cable news shows. They have to get people to write op-eds. There will be all kinds of investigations and stories dripping out for god knows how long, and the Democrats should spend every day tying all of it to the Republican Party. They can’t sit back and wait for it to happen.” McConnell saw the truth in that and included quotes from that interview in a message to his caucus urging them not to support a January 6 commission.


Clearly, the Dems must keep the pressure on.  Our democracy is at stake if the House turns over. Already 47 states are trying to make it harder to vote. And if the country simply moves on from January 6, it is sure to happen again.

Ryan’s outburst went viral with millions of views. Hopefully, he prodded other Democrats to be more aggressive in attacking the Republican stance on this issue. We need more like Tim Ryan.

Posted by Steve Charing at 5:55 PM No comments: