‘Hamilton’ Makes its Shot at the Hippodrome

I wish that American History was taught back in the day in the manner it is presented in the highly acclaimed musical Hamilton.  The show, which is gracing Baltimore’s majestic Hippodrome Theatre as part of a national tour, presents an inventive, moving, uber-entertaining and informative story of the country’s Founding Fathers. It centers on the life and death of Alexander Hamilton spanning the American Revolution era and beyond over a period of 30 years.

While historians may quibble about the accuracy of some of the events and interactions as depicted in the musical (and the admitted taking of some dramatic license in conveying the story), it’s pretty darn close. You should simply relax and soak it all up during what must be described as a spectacular production and an exhilarating theatrical experience.

Written and composed by Lin-Manuel Miranda (In the Heights), who also starred in the show on Broadway, the 2015 musical captured 11 Tony Awards out of a record 16 nominations at the 70th Tony Awards presentation in 2016 including Best Musical as well as numerous other accolades including a Grammy Award for Best Musical Theater Album. And for good measure, it won a Pulitzer Prize for Best Drama.

Miranda was inspired by the story on the Pulitzer-winning biography Alexander Hamilton by Ron Chernow.  The success of the show on Broadway and elsewhere as well as on tour is utterly breathtaking, and for the longest time, a ticket to Hamilton was like finding gold. But here it is, in Charm City. And yes, tickets are currently available for weeknight performances, so there is gold to be had.

Hamilton’s style and music blend contemporary with the historical in a complex and layered musical arrangement. There is little dialogue outside of the songs. As such, Miranda’s music is presented with mostly hip-hop songs with conventional ballads mixed in and performed superbly by a cast that is comprised of largely people of color. A little campiness and some comedic lines are thrown in along the way. These elements are aimed at appealing to a younger generation.

Virtually all the songs are top rate.  They narrate the story and adroitly capture the emotions of the principals. Songs like “Wait for It,” “My Shot,” “The Room Where It Happens,” “The Story of Tonight,” “Dear Theodosia,” “Non-Stop,” "Washington on Your Side,” “One Last Time,” and the incredible “Satisfied” are among my favorites, but you can’t go wrong with any number.

Conductor Emmanuel Schvartzman and the orchestra are excellent in executing Miranda's score without overwhelming the vocalists so that all lyrics are clearly heard. This is significant because the lyrics relate much of the story.

Thomas Kail’s meticulous direction and Andy Blankenbuehler’s stunning and varied choreography keep the show moving like a whirlwind no matter the scene. Clad in exquisite period garb designed by Paul Tazewell, the talented company puts on a performance for the ages.

The musical breathes vibrancy into the colorful lives of the Founding Fathers.  As one would expect, Alexander Hamilton (played exceptionally by Pierre Jean Gonzalez) is the central figure. The show depicts Hamilton’s journey from being an immigrant orphan to anti-slavery advocate, to war hero, to George Washington’s right-hand man, to Secretary of the Treasury, to political influencer until he was not. Fueled by ambition and motivated by his legacy, Hamilton navigates his life that experienced triumphs and tragedies along the journey.

His relationship with his chief nemesis Aaron Burr was, as one could say, complicated. Played superbly by Jared Dixon, Burr was at times Hamilton’s friend, but through envy and jealousy, most other times, he was his rival. The intensity of the rivalry increases, and it led to the famous tragic duel at show’s end.

Hamilton found love and married Eliza Schuyler, one of the three daughters of the wealthy Phillip Schuyler in the production.

Throughout, Hamilton engages with other Founding Fathers Washington, Adams, Jefferson, Madison as well as Marquis de Lafayette, and for comic relief, King George with varying degrees of collegiality. These interactions and developments led to events that helped shape our country from the outset.

As Hamilton, Pierre Jean Gonzalez performs with blazing energy and passion. He raps most of his numbers, which bring to life the complexities of Hamilton’s emotions and personality.  Mr. Gonzalez is involved in the majority of the show’s songs with others in the cast and effectively channels his inner Lin-Manuel Miranda.

Jared Dixon as Aaron Burr is also a standout. Possessing a stellar voice, Mr. Dixon excels in “Wait for It,” “The Room Where it Happens” and “Guns and Ships” among several others. Commanding the stage, he proficiently conveys the up and down relationship with Hamilton.

On the night this show as reviewed, Jisel Soleil Ayon wonderfully played the devoted wife of Hamilton, Eliza. In an emotional role, she had to contend with her husband’s marital infidelity and time spent away from her to carry on his work. On top of that, she faced the death of her son in a duel. Her excellent vocals came to the fore in songs like “The Schuyler Sisters,” “Helpless,” “That Would Be Enough,” and the rare solo in the show “Burn” whereby she movingly copes with her husband’s betrayal and calls him out on his flaws.

"The musical breathes vibrancy into the colorful lives of the Founding Fathers."

Angelcia Schuyler, Eliza’s sister, is played Ta’Rea Campbell. A smart woman who envisions women’s liberation, she rapped that she isn’t concerned about the American Revolution; she wants a moment of revelation. Angelica also fell in love with Hamilton along with her younger sister, Eliza, but selflessly yielded to her so they could be married.  This is manifested in one of the show’s best songs, “Satisfied,” where Ms. Campbell’s proficiency in rap is outstanding.

Marcus Choi does an excellent job as George Washington. He exemplifies Washington’s commanding demeanor and possess an outstanding singing voice. He excels in “Non-Stop,”  “Cabinet Battle #1,” “Cabinet Battle #2,” and “One Last Time.”

In the role of Thomas Jefferson, Warren Egypt Franklin (he also plays Marquis de Lafayette) adds a little camp and cool to the show with his swagger. He opens the second act with “Wha’d I Miss,” a playful song and performs well in such numbers as “Washington on Your Side” and “The Election of 1800.”

Other notable performances include Desmond Sean Ellington as James Madison and Hercules Mulligan and Neil Haskell who plays the comic relief character, the glittery King George. Mr. Haskell excels in the solos “What Comes Next?” where he taunts the Founding Fathers and “I Know Him.”

The remainder of the cast and ensemble perform at a high level and exhibit outstanding moves in the precise and polished choreography.

Tony-nominated Scenic Designer David Korins designed an aesthetically attractive and functional set and the only set in the show. The dark bronze-colored scenery combined with Howell Binkley’s superb lighting design casts a brownish hue that is reminiscent of sepia toned photographs from over a century ago giving it an old-time feel. I don’t know if that was the goal, but that’s how I perceive it.

There is a frequently used turntable arrangement downstage, framed by scaffolding and a second-level catwalk. The multi-level set provides depth, changing the eye level of the action effectively.  The spinning turntable allows the musical to swirl and maintain the rapid-fire action as the performers stand still yet in motion.

Hamilton is one of the gold standards in musicals. It contains all the ingredients for an amazing evening of pure entertainment while you can brush up on your history, too. A talented cast and Miranda’s unique storytelling employing contemporary music and styles make Hamilton a standout.

The thunderous ovation received from the audience at show’s end does no justice to the word “thunder.” As stated previously, seats are currently available for weeknight performances though it will cost more than the $10 bill that Hamilton adorns. Take your shot; it’s worth it.

Running time. Two hours and 45 minutes with an intermission.

Hamilton runs through October 30 at the Hippodrome Theatre at the France-Merrick Performing Arts Center, 12 N. Eutaw St, Baltimore, MD 21201.  For tickets, call Ticketmaster at 800-982-ARTS or visit ticketmaster.com or BaltimoreHippodrome.com. 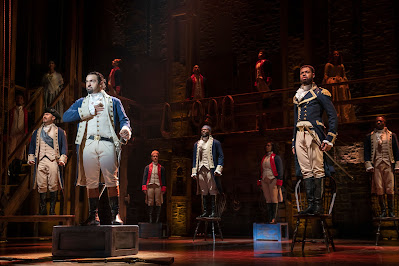 Posted by Steve Charing at 2:01 PM No comments: