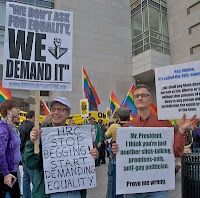 “Democrats never agree on anything, that's why they're Democrats. If they agreed with each other, they would be Republicans.”—Will Rogers
The Republican Party has a much easier time with their base than the Democrats. Essentially, the GOP base consists of three groups: Social/Religious Conservatives, Fiscal Conservatives and Military Hawks.
Republican leaders do little to risk offending a particular segment of the party. Many, if not most, share common Republican “principles,” you know, like anti-immigration, anti-environment (social conservatives tend to be more moderate on this issue, however), anti-tax, anti-regulation, anti-HIV funding, and, of course, anti-gay. But they won’t “teabag” when one segment of the party falters in their view. They save that asinine activity for the Democrats.
The 2008 election run-up was illustrative. The Republican base eroded during the two years prior to the election. But that was fueled mainly by anger by fiscal conservatives as President Bush allowed the federal deficit to swell to historic levels.
Social conservatives never abandoned Bush; he maintained that marriage was solely between a man and a woman, so they were content. Never mind that the country was mired in two wars, the economy sunk into near oblivion, and our standing in the world was somewhere between pariah and outcast. Bush was resolute against marriage equality. That’s what mattered most to them.
The same thing goes for the military hawks. They got what they always wanted: war. Two of them, in fact. Better to fight them over there than to fight them here.
So, when all was said and done, the Bushies garnered 25 to 28 percent support nationally for doing a heckuva job. These folks resided in the social conservative and military hawk legs of the 3-legged stool called the GOP base. Only the fiscal tightwads lost their devotion.
Democrats have a more complex conundrum. There aren’t groups of voters who fit into few and tidy categories. Democratic constituents really don’t form a base in a pure sense but a variety of bases that sometimes are pitted against each other. That’s where they differ markedly from the Republican base.
The Democratic base consists of large chunk of the minorities in the country, especially African-Americans and Hispanics. You also have conservative Democrats, labor unions, teachers, environmentalists, intellectuals, young people, lgbt folks, “Hollywood personalities,” pro-immigration, pro-choice, anti-death penalty, anti-gun, anti-war, the beat goes on.
Not all of these elements work against each other for sure. But not all work together either. The result: the Democratic Party. Gnawing at each other, yes, but also slapping the others’ backs following the uplifting election of November 2008, when the “base” was energized.
There was no back slapping, however, in the aftermath of the Proposition 8 debacle in California. The knee-jerk reaction of many gay activists was to blame not only the Mormons who disproportionately financed the pro-Prop 8 campaign, but African-Americans.
While it is true that socially conservative but Democratic African-Americans are largely opposed to same-sex marriage, statistical analysis post-Prop 8 revealed that as a group, they were not responsible for the passage of this hideous ballot initiative. Instead, it was older voters that tipped the scale on that one. Of course, that group did include socially conservative African-Americans.
Nevertheless, these two key components of the Democratic base continue to square off against each other. African-Americans who oppose marriage equality base it for the most part on religious grounds. Many also resent the comparison between the quest for LGBT rights and that of the civil rights movement, despite the pronouncements from Julian Bond, the late Coretta Scott King and other prominent black civil rights leaders.
“No people of good will should oppose marriage equality,” said Bond at the October 11 National March for Equality rally. “We have some real and serious problems in this country; same-sex marriage is not one of them.”
President Obama is feeling the pressure from leading a party with such a diverse and ornery base. His silence during the Prop 8 debate was irritating to gay activists. He ostensibly made a calculation that while his heart may be on the side of LGBT rights, his political brain told him not to alienate the African-American base within the party.
His problems with his LGBT base were heightened following his now controversial speech before the Human Rights Campaign annual dinner. He didn’t specify a timetable for passage of key legislative initiatives, and many gay activists huffed and puffed. The anger among these folks is palpable, and the effect it will have on a unified Democratic Party going into the 2010 mid-term elections remains to be seen.
That’s where we are now—a struggle, a tug-of-war. Democrats share common ideals and principles but fight among themselves.
This doesn’t happen with the Republican Party. At least not yet.
www.SteveCharing.blogspot.com.
Posted by Steve Charing at 7:43 PM No comments: 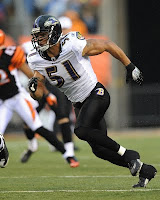 By Steve Charing
As linebackers in the National Football League go, Brendon Ayanbadejo of the Baltimore Ravens is relatively small. At 6-1, 228 lbs. he is often outsized by his peers. But his heart is big. and he knows how to compete.
Besides being a solid and speedy linebacker, # 51 is also a fixture on the Ravens’ special teams, covering and blocking during kickoffs. His overall defensive prowess in Week 3 of the current NFL season earned the 33 year-old UCLA alum AFC Defensive Player of the Week honors. Unfortunately, in Week 4 he sustained a season-ending injury.
While he may be considered small by NFL standards, Brendon Ayanbadejo has left a large footprint on lgbt equality. Back in April, Ayanbadejo wrote a 364-word blog on the widely read Huffington Post titled, "Same Sex Marriages: What’s the Big Deal?"
He starts right off by debunking the argument that the opposition to same-sex marriage should be based on religion. "Church and state are supposed to be completely separated when it comes to the rule of law in the United States," he wrote. "So the religious argument that God meant for only man and woman to be together has no bearing here!" As a punctuation mark to this thought, Ayanbadejo added, "We are a secular capitalistic democracy. That's it."
He justified Barack Obama’s lack of support for same-sex marriage by stating, "It seems that Obama felt the need to embrace Christianity more to fit in."
Ayanbadejo chided the stunt pulled off by Britney Spears as an indication of how many heterosexual couples have hurt the institution of marriage. "If Britney Spears can party it up in Vegas with one of her boys and go get married on a whim and annul her marriage the next day, why can't a loving same sex couple tie the knot? How could our society grant more rights to a heterosexual one night stand wedding in Vegas than a gay couple that has been together for 3, 5, 10 years of true love? The divorce rate in America is currently 50%. I am willing to bet that same sex marriages have a higher success rate than heterosexual marriages."
He concluded his blog post with a reflection on the civil rights movement. "Maybe I am a man ahead of my time. However, looking at the former restrictions on human rights in our country starting with slavery, women not being able to vote, blacks being counted as two thirds of a human, segregation, no gays in the military (to list a few) all have gone by the wayside. But now here in 2009 same sex marriages are prohibited. I think we will look back in 10, 20, 30 years and be amazed that gays and lesbians did not have the same rights as everyone else. How did this ever happen in the land of the free and the home of the brave? Are we really free?"
And this much-appreciated support for lgbt equality by Brendon Ayanbadejo did not stop at the Huffington Post. Last month, he appeared with his girlfriend at the new offices of Equality Maryland—right across the street from M&T Bank Stadium—to offer more encouragement during the organization’s welcome reception.
How important is it for a professional football player to stand behind marriage equality? Very. And perhaps it can help open closet doors for some athletes down the road.
Esera Tuaolo was one of three gay NFLers to come out of the closet—after hanging up their pads. All felt they would have been hated by teammates had they chose to disclose their sexual orientation during their playing days. No active professional male athlete has yet to come out.
The main concern for gay athletes appears to be the locker room culture and the potential risks stemming from that culture. There have certainly been a number of anti-gay slurs spewed by athletes of several sports to create an environment where the closet remains shut.
But Brendon Ayanbadejo’s public stance on marriage equality may have opened the door—however slightly—for a gay male athlete to one day feel comfortable enough to extricate himself from the tight closet and be who he really is.
I was hoping to interview Ayanbadejo to see if the climate has improved enough for a gay athlete—football player or not—to come out. If such a player existed on the Ravens, would Ayanbadejo be an enthusiastic supporter of his teammate? Would he stand alone or would his teammates rally behind the player? Or is it best that the player remain in the closet?
But the Ravens PR manager would not allow me to contact Brendon so these questions remain unanswered.
Regardless, Brendon Ayanbadejo plays big on the gridiron, as he has been selected to the Pro Bowl three years in a row. And he plays big off the field. This is an ally we need if we, as a community, are to reach the equality goal line.
http://www.stevecharing.blogspot.com/
Posted by Steve Charing at 10:29 AM No comments: