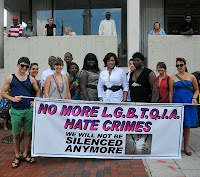 Vancouver, British Columbia is a million miles from Baltimore in so many respects: three time zones away, totally dissimilar scenery, lower homicide rate, different demographic composition, etc. Yet both share some common characteristics: they have busy ports; both draw multitudes of tourists; and both have vibrant LGBT communities.

Visiting Vancouver for three days seemed like a nice respite from the crime-dominated reports we read in our local newspaper or see on TV. Yet, imagine the surprise I felt when the Vancouver LGBT newspaper Xtra! told of the second gay bashing there in a three-week period.

A July 1 beating of a gay man by two Vancouver 21 year-olds took place on Davie Street, the main drag that runs through the city's "gay village." Police Department spokesperson Const. Jana McGuinness told Xtra!, "Disturbing comments were also allegedly made regarding the victim's sexual orientation." It was the latest such attack in a city that unfortunately is earning a reputation of late for its gay bashings.

This is Vancouver. This is Canada. This isn't supposed to happen there, especially when the country legalized same-sex marriage putting Canada far ahead of the U.S. on the progressive curve. The lesson here is that gay bashing can occur anywhere, anytime.

Just over five years ago, Chris Crain, then editor of the Washington Blade, was severely beaten in Amsterdam, of all places. Amsterdam? It is arguably the most gay-friendly city, and the Netherlands the most gay-friendly country on the planet. Yet this attack took place while Crain and his partner were holding hands walking along the street enroute to their hotel by seven men believed to be of Moroccan descent. This much publicized incident made international headlines and sullied, to some degree, the rainbow reputation of Amsterdam.

Baltimore may not be Vancouver or even Amsterdam, but each city sadly has its share of attacks against lgbt people. No place is safe. Hand-holding, while we all agree should be allowed unfettered in a perfect world, is an invitation to would-be gay bashers. And we know the world is nowhere near perfect.

Walking alone late at night is risky. Parking in dark, secluded areas is risky. Stumbling intoxicated down a street is risky. And yes, hand-holding is risky.

We've come a long way. We can write laws that protect us. We can gain rights that in the past seemed unreachable. We can even live, work and play in a gay village. But these forward steps do not and cannot prevent hatred because that is contained in one's mind. No law is going to change how a bigot or homophobe thinks; it can only codify behavior. And haters, especially if they, themselves, are under the influence, will ignore the law. We know that all too well.

But we can protect ourselves from bashings and attacks. Avoiding the situations mentioned above will help.

By the same token, members of the Baltimore City Police Department must stop discouraging people from reporting crimes in an effort to keep the "numbers" down. Even rape victims have been persuaded not to file reports. This is deplorable.

As stated in our front page story, activist organization Trans-United held an historical meeting with the city's State's Attorney as well as a U.S. Attorney in an effort to do something about hate crimes committed against lgbt citizens. Agreements were reached that hate crimes statistics will be maintained on a database, which had not been done before. This is an important step in gathering information for law enforcement so that we can minimize the dangers still lurking out there.

Thank you to Sandy Rawls and her Trans-United colleagues and supporters for their efforts in this campaign to stamp out hate crimes in Baltimore. We must help them achieve their goals.

In Vancouver, lesbian city councillor, Ellen Woodsworth condemned the attacks along Davie Street, which she said have been going on for years. She is calling for a meeting between the city's mayor and business and religious leaders to denounce homophobia and call for zero tolerance of gay bashings. Woodsworth is also pushing for more education on tolerance.

Vancouver and Baltimore may seem a world apart, but gay bashings and hate crimes are, unfortunately, a common denominator that must be eradicated to the extent possible. This is a community-wide problem that requires a community-wide solution.

Posted by Steve Charing at 10:03 AM No comments: 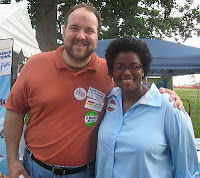 As successful candidates know all too well, it is better that they get the early jump, especially if they are challenging better-known incumbents for seats. Organization-building, fighting for scarce dollars, and campaigning for name recognition are essential.
That's what gay candidates Luke Clippinger and Mary Washington (pictured) of Baltimore have been doing. Both are vying for vacant seats in the Maryland House of Delegates—Clippinger in District 46 and Washington in District 43. We profiled these two attractive and well-qualified candidates two months ago in OUTloud immediately after they publicly announced their candidacies.
But their campaigns did not begin then. Both diligently had done the hard and necessary work to establish solid organizations, drawing good people into their campaigns and designing strategies to raise cash and establish message delivery mechanisms. They hit the ground running, and they have no intentions of stopping. Candidates for elected office must set the right tone by working hard. Voters see that and remember that at the polls. They want to be represented by hard workers who are competent and speak to their values and interests.
Both are proving just that. Clippinger has been knocking on doors in his district even several months before his announced candidacy to deliver his message. The campaign announced that a milestone of 10,000 knocked doors has been reached.
Washington is also out in and around the district vigorously meeting voters. She had run unsuccessfully 4 years prior, so name recognition may not be as crucial for her. Both have been using innovative methods to raise funds that are critical to any campaign. Mary Washington, for example, just held a fundraiser at Gertrude's Restaurant at the BMA that featured Mississippi hill-country bluesman Terry Harmonica Bean with his band The Cornlickers. This is something you don't ordinarily see at Baltimore campaign events.
These candidates did a great job working the Pride festival. The bonus of electing Luke Clippinger and Mary Washington to serve in Annapolis is that as gay individuals, they clearly see the issues facing the lgbt community from a first-hand perspective. They are not running as gay candidates, however; they are running as candidates who happen to be gay. That is the correct approach because both candidates know they cannot win solely by their sexual orientation. They must appeal to the broader electorate's interests and address the other myriad issues concerning the voters.
Nonetheless, Washington and Clippinger are committed to the need to end discrimination and promote equality. If elected, over time, they will establish working relationships with colleagues that should help advance our goals. This has been the case with Senator Rich Madaleno (Montgomery County) and the three out delegates—Heather Mizeur (Montgomery), Anne Kaiser (Montgomery) and Maggie McIntosh (Baltimore)—who have earned trust and respect from their colleagues to attract more support to key lgbt legislative initiatives.
Two other candidates, Dr. Dana Beyer a transgender activist from Montgomery County and Bonnie Cullison, a lesbian, also from Montgomery are seeking office. Both are challengers.
Adding to that roster of LGBT elected officials will only help advance equality.
Another benefit of electing LGBT candidates is that it motivates our community to become more involved. Baltimore has a reputation (as opposed to D.C.) of not being politically active or interested. Of course, there are exceptions, but overall politics—particularly at the local level—does not stoke or excite lgbt people here.
Organizations, such as the Stonewall Democrats of Central Maryland, Young Democrats of Maryland and Equality Maryland are making the effort to get people more involved.
And candidates, such as Luke Clippinger and Mary Washington are doing the same. They are taking advantage of the new technology that was not available in the 2006 election cycle. Using social-networking sites such as Facebook and Twitter, they can raise awareness of their candidacy to a broad audience. In doing so, they contact friends who otherwise do not have an interest in politics, and it may draw them into the process.
And yes, we need to do just that.
Posted by Steve Charing at 12:11 AM No comments: