A Dress Rehearsal for November?

Concern mounts over how an unstable, volatile Trump may act after being defeated in the election.

Let’s assume President Donald Trump loses the upcoming presidential election. Now let’s imagine what his concession speech may sound like on the night of November 3:
“Well, the American people have spoken and I wholeheartedly respect their decision. I just called President-elect Joe Biden and congratulated him on his robust campaign and wished him the best of luck. I promised that my staff and I will make the transition to the Biden Administration as smooth and efficient as possible. I want to thank my supporters and my family for their devotion to me as we must seek to unify our country during these difficult times. As for me, I will resume my role at the helm of the Trump Organization and pledge to help the Biden Administration in any way I can for the betterment of our county.”

Now if you believe that this speech could take place I have a beautiful ski lodge in the South Florida mountains to sell you.

Comedian Bill Maher has famously said over the past couple of years that Trump, should he lose, would never leave the White House. Lots of people dismissed that as pure hyperbole with little evidence to support the notion that Trump would violate the Constitution and cause an unnecessary crisis. #hocopolitics

However, as the coronavirus pandemic has gained a stronghold in the world and in the U.S. in particular, tweets and spoken words by the president over the past two months seemed to have added credence to what was viewed as Maher’s preposterous speculation and has worried many more.

Stumbling out of the gate even when Trump’s own intel and health officials warned him of the pandemic, Trump mismanaged the crisis as he acknowledged it a full two months after he was alerted to it. He offered confusing and contradictory messages, played politics with “blue state” governors, and failed to establish a plan to provide much needed testing and personal protective equipment to health workers on the front lines.

Trump was in denial and played down the coronavirus as nothing more than a flu, which will disappear, and a new Democratic hoax. He claimed almost simultaneously that he bore no responsibility; he had total authority; and then shoved it off to the states to deal with it. Later, he offered a possible treatment: injecting bleach into one’s system and using UV rays internally with neither lethal activity sanctioned by legitimate physicians and scientists.

Along the way, Trump witnessed the meltdown of his vaunted stock market numbers—one of the measures he planned to use to justify re-election—and now the jobless rate and the total reported unemployed are in Depression territory. His chances for re-election were evaporating, and he was desperate. And a desperate Trump is indeed a dangerous Trump.

Trump egged on demonstrations against stay-at-home orders by state governors in violation of the White House’s own public guidelines for dealing with the coronavirus and preventing the spread of COVID-19 urging them to “liberate” their states.

Recall how Trump used to say that the military, police and bikers were his people. He must have really been aroused to see demonstrators decked out in cammo or with many donning Trump-Pence 2020 garb and hoisting banners with a few swastikas sprinkled about.

In Lansing, Michigan, demonstrators—all white—entered the state capitol with impunity replete with long rifles and automatic weapons slung over their shoulders as a means to intimidate. This was clearly Exhibit A of white privilege; unarmed Black joggers meet a different fate. 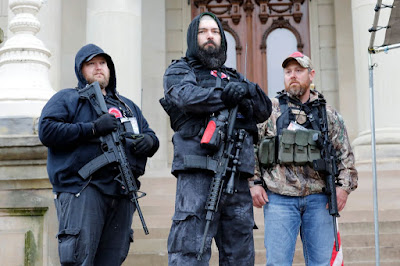 The summoning of weapon-toting Trump supporters has begun to alarm folks and wonder what Trump would do should he lose.  Certainly, referring to the demonstrators as "warriors" is unsettling, too. What has taken place with these protests could be a dress rehearsal for November.

“If anyone doubts that Trump will ask MAGA to take up arms and defend him at all costs if he loses in November, you don’t know the man,” tweeted former Trump insider turned stand-up comedian Noel Casler who spent six seasons on the set of Celebrity Apprentice. “He would plunge this country in chaos to escape justice or fair election results.”

If anyone doubts that Trump will ask MAGA to take up arms and defend him at all costs if he loses in November, you don’t know the man. He would plunge this country in chaos to escape justice or fair election results. @realDonaldTrump

Many Democrats as well as some traditional Republicans, after witnessing Trump’s erratic behavior over the course of his term and in particular, during the current crisis, fear he would declare the election as rigged by the media and deep state and the mail-in ballots fraudulent.

At the extreme he could urge militias to storm the streets and government buildings to protest the results. There have been similar threats by right wing extremist groups online so it’s not a concept plucked out of mid-air.

The next six months promises to be ugly and dangerous politically and economically as will the coronavirus pandemic, especially if there is another surge because states opened up their economy prematurely. A desperate Trump, whose election fortunes rest with how he ultimately is seen managing the crisis, is well aware he faces legal turbulence once he is not a sitting president, should alarm us all.

How such a constitutional crisis would be rectified is uncertain at best.

Images: Reddit,VOX
Posted by Steve Charing at 2:50 PM No comments: