Massachusetts Gave Our Pride a Boost 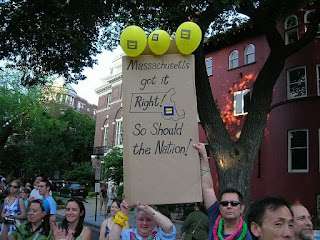 Merely two days before the first set of high heels clicked down Charles Street to kick off Baltimore’s annual Pride celebrations, we got a big time boost from our friends in Massachusetts. My guess is that not many here were aware of it or even cared, as most seem to view the Pride hoopla as a big circuit party on Saturday and a more laid back stroll-in-the-park on Sunday.

But for those who view marriage equality as a goal to strive for, at least to have the option of same-sex marriage, then the news emanating from Massachusetts was a sweet way to get us off and running, and I don’t mean in high heels.

Their legislature found a way to preserve same-sex marriage in the Bay State at least until 2012 by defeating by 5 votes an attempt to get the measure on a statewide ballot in 2008. That could have resulted in a constitutional amendment and reverse a significant victory: the first state in the U.S. where same-sex marriage is legal.

This was an awesome development. Quite a few in the legislature who previously supported the amendment changed their minds and saw that the sky did not fall from the experience of three years of same-sex couples—8,500 in all—marrying in Massachusetts.

Not only did the Massachusetts legislature see the light, but their governor, Deval Patrick, was unabashedly supportive of marriage equality and lobbied hard to defeat the proposed ban. “In Massachusetts today, the freedom to marry is secure,” he told a cheering crowd following the announcement of the results. “Today's vote is not just a vote for marriage equality. It was a vote for equality itself.”

On top of that, New Jersey, which has just joined those other states that have legalized civil unions, added transgender protection to the state law. These victories in the Garden State were also helped out by the backing of Governor Jon Corzine.

The efforts by these two state executives and their legislatures set a great path for Maryland to follow. Massachusetts was key.

Equality Maryland’s executive director Dan Furmansky perhaps summed it up best. He told me, “Victory in Massachusetts is important for us in Maryland, as legislators need the example of a similarly situated state that has weathered the battle for marriage equality and kept it as the law of the land.”
Most Democratic legislators are especially apprehensive about being too supportive of “gay marriage” even in blue states. They need political cover, as well as leadership, and that is what Governors Patrick and Corzine provided.

Governor Martin O’Malley has stated through his staff that he opposes a constitutional amendment in Maryland and would veto such a measure. Unfortunately, he does not have the authority to veto it, as it could go on the ballot if passed by the General Assembly with a 60 percent vote. It would mean minority rights would be put up for a popular vote, and that’s not a good thing.

Instead, it would be great if Mr. O’Malley followed the path of his fellow governors and begin to take the lead to help thwart an amendment initiative before it gains any footing. Should the Maryland Court of Appeals issue their long-awaited decision on the marriage lawsuit favorably, it would set off a chain of events that will result in a predicted cowering of some legislators and demagoguery from others—all pointing to a constitutional amendment try.

The state’s top officials failed us during the past General Assembly when a bill to protect transgendered individuals from discrimination died in committee when it appeared it had the floor votes to pass. Many blame the Senate leadership for allowing that travesty to happen. Others blame the Governor for not being more vocal, although he supported a similar measure while he was mayor of Baltimore.

Elected officials like Governors Patrick and Corzine have triumphed over “Rove-phobia”—the fear that if one supports anything gay the candidate will lose the next election—to speak out and push for fairness and equality and advocate for what is right and just.

They set out the path. We need our elected officials here to follow it without fear.
Posted by Steve Charing at 8:21 AM