The Dangers of Political Apathy 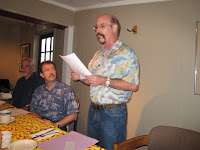 Text of Speech given to G & L Jewish Group at the Havurah Brunch in Mount Washington,
June 3, 2007