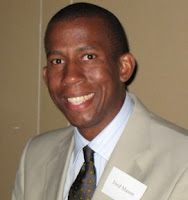 By Steve Charing
A bright, comfortable spring afternoon in Lafayette Square provided an appropriate backdrop for Fred D. Mason III to announce his candidacy for the 11th Council District in Baltimore City.
In many ways this event on May 21 resembled most local political announcements. Other politicians, such as Carl Stokes; union officials; friends from his church; and community residents gathered to hear Mason’s strong speech. The candidate’s father, Fred Mason, Jr., who is head of the Maryland and D.C. AFL-CIO, was also present as was his campaign chairman Bob Moore of the Service Employees International Union.
On the surface it seemed like your garden-variety political announcement, but this one was far more unique than the others. Because also attending this event was Phillip Lovett, the candidate’s gay partner of almost nine years.
Should Mason win this council seat vacated by mayoral hopeful Keiffer Mitchell by defeating a field that so far counts at least four other opponents including a former state delegate, it would be historic. If elected, Mason said he would become the first openly gay person to be a member of the Baltimore City Council and would be the first openly gay African-American to hold an elected office anywhere in Maryland.
Indeed, Mason does not conceal his sexuality in this endeavor. He pointed out in his speech that he and Phillip have been residents of Reservoir Hill for seven years. And he acknowledged the value of diversity: "We are a mix of incomes, races, ethnicities, creeds, sexual orientations, and national origins."
The 11th District encompasses Baltimore’s downtown business district and spans Reservoir Hill to Federal Hill and the Jones Falls to Harlem Park. It includes the heavily gay populated neighborhoods of Mount Vernon and Bolton Hill.
With a crowded field of candidates Mason, 35, feels he can distinguish himself from the others. "I believe that my broad background and ability to relate to the diverse communities that make up the 11th District separates me from the other candidates," he told Baltimore OUTloud. "I have a vision for the district. I want a safe community where the people can learn, earn and build." He added, "I can build partnerships and coalitions with those that do not always cooperate."
And he knows what is needed to be successful as a council member. "A city council person must be a great advocate, a bridge builder, and a problem solver," he said in his speech. "The 11th District needs a councilperson who can hit the ground running—someone who can relate to all parts of the district and build effective relationships."
A strong supporter of marriage equality, Mason told OUTloud that he also wants to "improve the stature and funding of the Mayor’s GLBT Task Force."
Fred Mason III, a project architect, received a Bachelor’s degree in Political Economy from Tulane University and holds Masters degrees in Public Policy from Georgetown University and Architecture from Morgan State University.
A native Baltimorean, Mason, while working for the state, was involved in the financing of the Hippodrome and the Inner Harbor Welcome Center, and was on the construction management team for the first building of the University of Maryland Baltimore BioPark, and the Baltimore School for the Arts.
He had internships with Rep. Kweisi Mfume and Senator Paul Sarbanes, which provided him a good understanding of how government serves its citizens and how to form coalitions.
Mason is a strong believer of community involvement. Besides his lifelong involvement with Saint James Episcopal Church on Lafayette Square, he has worked with HERO and Sandtown Habitat for Humanity.
"I live, work, and worship in the 11th District, and I want to place all of my knowledge and experience at the service of our diverse communities," he writes on his website .
His love of his community and his strong educational and professional background will make Fred D. Mason III a strong contender for the seat. And a win would be a historic breakthrough for the lgbt community.
Posted by Steve Charing at 8:34 AM

We have come a long way. Now even a straight guy is looking for an endorsement. http://meister2007.wordpress.com/2007/03/30/adam-meister-receives-the-endorsement-of-the-founder-of-the-gay-lesbian-bisexual-and-transgender-community-center-of-baltimore/

This district has a large LGBT population. Therefore, it is not surprising for candidates of all stripes within the district to seek gay support. But you are correct; we have come a long way. Thirty years ago it wouldn't have been likely.