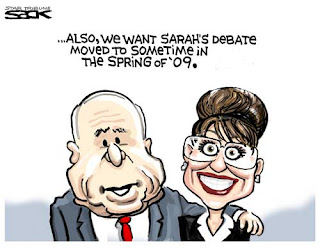 Why should the "bar" for a would-be vice-president be set low? We're talking about the 2nd highest office in the country. Nine vice-presidents ascended to the top spot following an uexpected departure by the president. That includes natural death, assasination and resignation.
In this global and shaky economy and at a point in time where international cooperation must be secured to fight the war on terrorsim, it is imperative that the vice-president, as well as the president, are both competent and qualified. We should not settle on individuals who are driven by ideology and is someone whom we would like to have a beer with. The past eight years proved why.
We need leaders who are capable of handling complex issues and do not resort to adolescent simplification. We need leaders who are forward thinking--not looking back to the past--and have a vision for a strong America. Through their inspiration, Americans will follow.
The vice-presidential debate provides an important window to the thought processes of the candidates regarding the issues of the day and how they would lead should either of them become the tenth VP to unexpectedly assume the role of president. It's not a contest about verbal gaffes and looking good.
It's too critical for that. The bar, accordingly, should be high, not low. 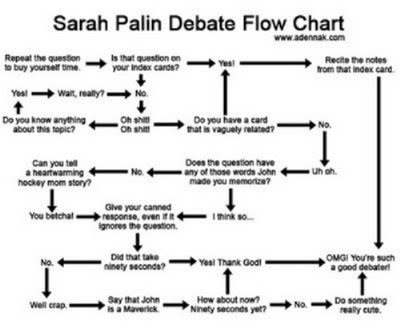 Managing to complete three sentences in a row without falling over the podium, Sarah Palin was hailed by conservatives for her brilliant effort. Among the many errors, distortions and outright lies, the most frightening aspect of Palin's perfomrance was her breathtaking lack of knowledge concerning the Constitution and the role of the Vice President.
She can wink all she wants, memorize her drilled-in talking points, say "doggone it" and "you betcha" until the cows come home, meeting an already low bar does not qualify one to occupy an office one heartbeat away from the presidency.
Posted by Steve Charing at 11:36 AM