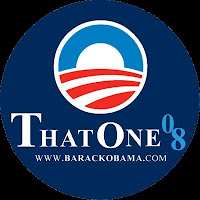 BRADLEY EFFECT? Nah. At this point in time during a national election it makes absolutely no sense for a McCain supporter to lie to pollsters and say that he/she is voting for Obama lest the interviewee will be viewed as a racist. All that does is inflate Obama's poll numbers and deflates team McCain's morale. There are many legitimate reasons to oppose Obama on experience and issues, and any opposition to him would be explained in those terms.
Without question race will be an issue, but I believe that has already been embedded in existing poll results; folks don't need to shy away from their actual voting intentions. The Bradley Effect MAY have been a factor in the NH primary when Obama was matched up against Hillary Clinton--a member of the same party--where he was leading the day before in the polls only to lose. But it should not rear its polls-twisting head on November 4 like it did in California back in 1982, and even if there actually were such an effect is under dispute.
LEVI STRESS. Out of the shadows of the McCain cocoon emerged Levi Johnston, the father-to-be of Sarah Palin's abstinence-averse daughter Bristol's child. He disclosed in an interview that he dropped out of high school to work in Alaska's oil fields presumably to help support the child if and when he gets hitched to Bristol.
What a shame! Here are the Palins--a million dollars in assets (oh how taxpayer-funded per diem when not traveling can add up!)--who couldn't give a little financial aid to at least allow the hockey stud dude to graduate from high school?
A million bucks they have. Doesn't sound like "Joe 6-pack" types to me. Palin's daughter may marry a high school dropout who didn't practice safe sex. A fine example they're setting for America's youth. Imagine if they were black how the stereotyping and insults would have been hurled at them.
GOTTA LOVE THE HATERS. As Palin and not as much recently, McCain, incited the crowds with fiery, hateful (and totally untrue) rhetoric about Obama's alleged "palling around" with terrorists. you can feel the vitriol just oozing from the yahoos present in the mob. Might as well get out the pitchforks and torches and chase Obama to a windmill. "Kill him." "Terrorist." "Off with his head." These are the so-called patriots who do not believe in a two-party system and would kill a fellow American because they disagree with them. Included among them is that idiot woman in Minnesota who told McCain that she read Obama was Arab. I wonder who may have given her that impression.
A number of those in the mobs--not all--are bigots and haters. The ones who are and are exorcised at Palin speeches hate Democrats, liberals, government, blacks, gays, Jews, immigrants, feminists, pro-choice folks, the media, etc. etc. etc. No, these people aren't patriots. They are white supremacists or sympathizers and many are hoping that an Obama victory would produce a huge backlash and help their cause. Tone it down extremists. Iran would welcome you.
Posted by Steve Charing at 3:20 PM