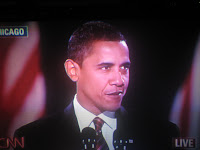 Obama’s majestic triumph tempered by heartbreaking Election Day setbacks to gays and lesbians
By Steve Charing
Senior Political Analyst
November 4, 2008 marked a transformational day in American history. With the election of the first African-American as president of the United States, the world, all of a sudden, became closer and a bit more unified. People were rejoicing in five continents. Although supporters of John McCain and Sarah Palin understandably may not have felt euphoric when the networks declared Barack Obama president at 11:00 p.m. EDT, I sure did.
But my elation was doused not that long afterwards, as three gay marriage bans and one anti-gay adoption initiative all apparently succeeded, reminding me that the country still has not taken that next big step.
For Obama, this was a contest that will keep political scientists and book publishers busy for decades. Barack Obama, a relative neophyte with a foreign-sounding name, rose from virtual obscurity and defeated a powerful Clinton machine to emerge as the Democratic Party’s nominee. Then he took on John McCain with his vaunted military and congressional experience, the embedded racism in the country, as well as the Republican Party’s fear and smear operation to win in an Electoral College landslide. In the process, Obama turned several red states blue with surgical precision.
There was as much good luck involved as there was skill. A perfect storm of events and personalities produced raindrops filled with smiles. He mainly benefited from the disastrous presidency of George W. Bush with whom he linked to his opponent, John McCain, with relentless regularity.
McCain incomprehensibly selected Sarah Palin—the butt of numerous jokes from her obvious lack of national and international knowledge—to be his running mate. The McCain campaign failed to effectively utilize the candidate’s strengths and instead defaulted to what the Republicans seem to do best: attack. And there were no significant international crises that affected the U.S., which would have highlighted McCain’s perceived strength on national security.
Then came the financial meltdown in September that accentuated the incompetence of the Bush presidency and McCain’s bumbling response to it. Added to that, notable endorsements from Colin Powell and a series of other Republican conservatives, the full-throated support from his chief Democratic rival, Hillary Clinton and her husband, and the die was cast.
But oh that skill! Obama’s campaign, led by David Plouffe and David Axelrod, crafted a blueprint on how 21st century presidential campaigns should operate. Always disciplined, always on message, always consistent, Obama successfully presented himself as the "change" candidate at a time the country was thirsty for change.
The campaign eschewed public financing and using the Internet primarily, managed to raise almost three quarters of a billion dollars to launch what was nearly a 50-state campaign. This forced McCain, who accepted public financing, to spend his more limited resources defending his own turf. That was crucial in states, such as Florida, Virginia, Ohio, Colorado and North Carolina.
In the end, the better campaign prevailed. And that is good news for the LGBT community.
Because now there is a much better chance for achieving non-discrimination legislation in the workplace, a Federal hate crimes bill and the repeal of the military’s "Don’t Ask, Don’t Tell" policy.

Expect to see openly gay and lesbian members in Obama’s administration; he kept reminding voters down the stretch that the country should not be split according to "gay" and "straight" among the other dividing lines in society. No other major presidential candidate ever used such rhetoric, and he repeated it to traditionally conservative gatherings in Middle America.

But those defeats on the ballot initiatives stung like nothing else has ever before. Just as national polls were indicating a gradual positive trend towards acceptance of same-sex marriage, November 4 proved to be a startling wake-up call that so much work remains. Ballot measures in Arizona and Florida resoundingly banned "gay marriage" in those states adding to the stockpile that has swollen since 2004. Arkansas voters sadly banned adoptions by gay couples. The ones suffering most from that decision are children.

But the biggest heartbreaker appears to be the results of Proposition 8 in California. While the votes have not been fully tallied at press time, the measure that would roll back a court decision legalizing same-sex marriage in the state, apparently is heading for passage.

Proponents of Prop 8 benefited from a major influx of funding from the Mormons, the Catholic Church and other religious entities to scare voters about the idea of two men or two women marrying. Tony Perkins, president of the virulently anti-gay Family Research Council, symbolized the religious support of the measure.

Characterizing Prop 8 as more important than the presidential election, Perkins said, "We have survived bad presidents. But many, many are convinced we will not survive this redefinition of marriage."

If Prop 8 survives the counting of absentee ballots, it will mark a staggering defeat to gays and lesbians since it was the first time rights that have been won were actually taken away. While it remains unclear if the existing same-sex marriages in California will be permitted to stand, the effects of such a setback will reverberate throughout the country.

And it mars the glistening victory of hope over fear in the election of Barack Obama.
Posted by Steve Charing at 3:33 PM

I believe that the setbacks from these propositions/amendments are probably beneficial to us in the long run. It is possibly the wake up call we need to realise won't "just happen"