Joe the Plumber Needs to be Flushed Already 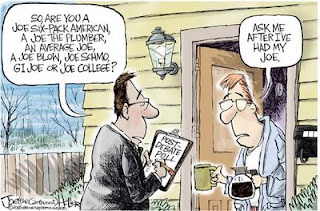 During this campaign, I never thought I'd find anyone as obnoxious as John McCain. Then came $150,000 you-betcha Barbie with her Joe Sixpack and other overdone comic strip characters. But they were BOTH topped by this goofball Joe the Plumber, er Samuel Wurzelbacher. Ick!
This is the guy McCain calls his "role model"--an unlicensed plumber who lies through his teeth and owes back taxes--who McCain would take to Washington should he prevail. That's telling. He might as well be McCain's running mate or at least replace Phil Gramm as his economic advisor using distortions from a conversation this guy had with Barack Obama. He fits in with Palin nicely. What a team!
This average Joe already has a PR agent, seeking a book deal, country music record deal and a political career. But I see him as an a-hole. He introduced McCain as a REAL American, implying Obama wasn't.
Enough of this loser. He needs to be flushed down the toilet so a licensed plumber can extricate him--or not.
Posted by Steve Charing at 4:28 PM

Hey Steve! "Joe the Plumber" was on CNN's Rick Sanchez yesterday and I got a kick out of it. It was pretty much a slap in the face to Joe. I got a real kick out of it. Here's a link to it if you haven't seen it.