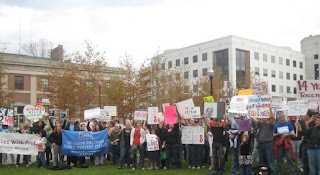 By Steve Charing
As the clouds were building on a mild Saturday afternoon of November 15, so were the crowds. People arrived from all directions as they assembled at War Memorial Plaza outside Baltimore’s City Hall. Young, old, gay, straight, black, white, couples with children, urban, suburban, you name it, all came with a common message: Equal Rights for All.
Many of the protesters at the plaza hoisted colorful hand-made signs. Among them read: "Is my civil rights getting in the way of your Bigotry," "Divorce Kills Marriage—Not Us," and "Did We Vote on Your Marriage?"
Roughly a third of the crowd was straight and half were college age underscoring the hope that momentum will swing favorably towards equality as the younger generation moves into adulthood.
These folks gathered to be part of a speedily planned event called "Join the Impact" to protest the passage of Proposition 8 in California—the ballot initiative that banned same-sex marriage. Similar rallies were held that day outside public buildings in 300 cities across the United States (including three in Maryland) which attracted around a million people as part of a national day of protest.
"Prop 8 creates a state law to single out one group of Californians to be treated differently," said Joseph King, who was one of the principal organizers of the Baltimore rally. "This is not what America is about. It’s wrong." In addition, King received invaluable assistance from Makemie Taylor, Steve Haddad and other activists.
Sean McGovern, who is planning a wedding next year with his partner Stefan Freed, was the emcee of the rally and continually stoked the sometimes-raucous crowd, reminding them that the passage of Prop 8 told us we are second class citizens and we should fight back.
In only five days time and despite an ominous weather forecast that proved to be accurate an hour and a half into the rally, the organizers were able to draw nearly a thousand protesters. King and Taylor used a variety of social networking sites on the Internet, e-mailed local activists, and urged a number of volunteers to trudge through the streets of Baltimore, Towson and other locales armed with fliers and posters to get the word out. Press coverage was ample, with crowd shots and interviews appearing on local TV news stations.
The event received support in the form of statements by Maryland Attorney General Doug Gansler and State Delegate Victor Ramirez. Some speakers—mostly members of couples—excited the crowd by spontaneously approaching the microphone to share their personal perspectives.
Other speakers included Meredith Curtis of the ACLU; Vanessa Bowling who is president of Rainbow Soul, a Gay Straight Alliance at Morgan State University; College Park City Council member Patrick Wojahn who just returned from San Diego as part of the "No on 8" campaign; PFLAG mom Joyce Kipp; and the principal plaintiffs in the Maryland lawsuit seeking marriage equality, Lisa Polyak and Gita Deane.
While Polyak and Deane were in the midst of their speech, the clouds emptied on the rally-goers with potent fury and forcing them to disperse. Undaunted, groups of protesters later assembled on nearby street corners waving their signs as passing motorists honked in support.
"Now if we can just keep the rallies and the work going," said Sean McGovern following the rally. "No one can say that Baltimore didn't do its part!"
Posted by Steve Charing at 10:54 AM