Is 'Glee' Sending the Right Message on Bullying? 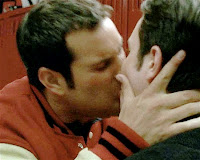 It’s just a TV show. The characters are fictional and the plot is pure fantasy. But we all know the impact TV shows can have on societal values and beliefs. Coincidental perhaps or as a result, America’s attitudes regarding gays started to trend towards more acceptance as the hit TV sitcom Will & Grace reeled off 8 successful seasons from 1998 to 2006.

Glee, in its second full season, is a top 25 show viewed by millions of people weekly. In the commercially vital 18-49 age demographic, Glee typically lands in the top three. Therefore, its popularity is quite high, so whatever message the show is conveying, it could influence large chunks of the population.

Among the myriad subplots and musical production numbers is the story of Kurt Hummel—the only openly gay student in his McKinley High School. The role, played by Chris Colfer, is sincere and heartfelt. Since the outset of the series, Kurt has been bullied and picked on. He was thrown into a dumpster and has been mocked mainly by the stereotypical jocks in the school.

Most likely because of the recent spate of teen suicides that were linked to bullying of kids who are gay or perceived to be gay, Glee has made the bullying of Kurt a central part of the plot. In the much talked- and written-about “Never Been Kissed” episode that aired on November 9, Kurt confronts his new tormentor Dave Karofsky (Max Adler) in the locker room following his habitual shoving of Kurt in the corridors of the school as well as the accompanying name-calling.

Courageously, Kurt gives him the what-for, and the TV audience of nearly 11 million was expecting the big goon to lay a right fist across Kurt’s face. Ah, but television doesn’t always show the predictable! Instead, Karofsky plants a big wet one on Kurt’s lips, which elicited the twin reactions from Kurt of shock and repulsion.

So yet another stereotype lives on: the biggest bullies against gay kids are closeted themselves. This, of course, is a myth, and the kiss scene does nothing to dispel it. Not everyone who hates us wants to sleep with us.

The causes of bullying have various roots. Often, we find the bullies have been bullied themselves during their young lives, or even worse, abused by family members. Some have genuine self-esteem issues, and picking on a smaller, fatter, poorer or gay kid helps him or her elevate their own worth. Others ascribe the bullying of gay kids as a normal ritual in high school in an effort to be popular. But one cannot draw the conclusion that bullying of gay kids results from sexual conflicts or confusion, although undoubtedly that is a factor in some cases.

As the bullying and harassment of Kurt by Dan Karofsky continues, the taunts and threats of bodily harm seem more frequent and darker (perhaps fueled by rejection). And if Kurt ever disclosed the kissing incident, Karofsky would kill him.

As we saw in the November 23 episode titled “Furt,” Kurt is completely terrorized. He and his supportive father go to the Principal (Sue Sylvester’s character) and then members of the school board to ask for help. Without “proof” they can’t do anything to Karofsky. How no one has witnessed any of Karofsky’s actions is hard to fathom, but proof is what is needed to expel the student.

Frustrated, Sue (Jane Lynch) resigns from the position of Principal in protest as a gesture of support to Kurt.

Kurt and his Dad, as well as his new step-mom decide a transfer from McKinley H.S. to a nearby all-boys school (Dalton Academy), which has a zero-tolerance for bullying, is needed. On a romantic level, this is a good thing for Kurt since there are feelings between him and a slightly older boy in the new school, Blaine (Darren Kriss) who promised to be his “mentor.”

They had met in the same “Never Been Kissed” episode when Kurt checked out Dalton Academy (also the competition in the upcoming glee club sectionals) when he was down on his current school environment. Blaine explained to Kurt that he is the only gay kid in the school and mentioned the zero-tolerance policy towards bullying.

All-boy schools or institutions have a well-deserved reputation of being harder on homosexuality than their co-ed counterparts, so it is speculative that the environment at Dalton is realistic in that the straight boys actually embrace Blaine.

The problem I am having with the plot is the removal of Kurt from McKinley H.S. While Kurt will be presumably safer (and perhaps land him a boyfriend as a bonus), it doesn’t offer a positive and encouraging message about combating bullying. If not Kurt then some other kid—gay or straight—will be a victim soon enough. It’s more of an avoidance solution than confronting the issue head on. Problem solved for Kurt, perhaps, but not at McKinley.

Bullying occurs in most schools with varying degrees of involvement from the school system down to the faculty support staff to the kids themselves. Zero-tolerance bullying policies are excellent but are they always enforceable? Remember, there must be a witness. Are teachers trained on LGBT issues and with particular emphasis on transgender students? And what are the roles of parents concerning bullies? Are they aware of the child’s actions and they simply look the other way?

Glee is a fine TV show with a large following especially in the LGBT community. The producers’ attempt to address the serious topic of bullying is noble and should be applauded. And this storyline is yet to be completed. If nothing else it brings further awareness to the issue.

But with the use of stereotyping, are they sending the right message?

While I agree that the football player being in the closet is a bit stereotypical, it's, as you said, only one of many possible scenarios they could have taken, and any one of the other scenarios could have the same "stereotypical" argument to them. Though Kurt has been remove from the terrorizing of Karosfky, it's not a "problem solved" situation for Kurt. You can tell in the Sectionals episode that he is anything but happy about it, and does miss his old Glee club. I foresee the plot coming back to this issue and addressing it more directly, really I have no doubt about that, it's really just a matter of how they address it.