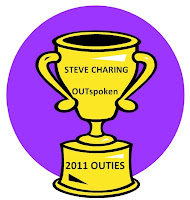 The Best, Worst, Biggest and Smallest of 2011

Happy New Year! It’s time to look back at the events and personalities of this past year in the areas of politics and culture and present an unapologetic, subjective, slanted list of winners (and losers) who are deserving of the OUTIES trophy. In no particular order, I welcome you to the OUTspoken OUTIES of 2011.

Most Understated Hero: Gay staffer Daniel Hernandez for aiding Rep. Gabrielle Giffords immediately following her being shot. His brave action was a significant reason the congresswoman is on the road to recovery today. And he still doesn’t see himself as a hero.

Sorry to See You Go: Frank Kameny for his tireless work to achieve LGBT rights over five decades. RIP Frank—we will someday be treated equally.

Honorable Mention: The announced 2012 retirement of Rep. Barney Frank. Flaws and all, he championed a federal Hate Crimes Bill, the repeal of Don’t Ask, Don’t Tell, was a lead sponsor of the Employment Non-Discrimination Act and a reliable outspoken ally in Congress. Barney’s departure will hurt GOP fundraising.

Biggest Near Death Experience: Equality Maryland. Following the failure to achieve its goals in the 2011 General Assembly, the organization ran out of money, fired its executive director along with most of the staff, and overhauled the board. But the one-time leading statewide LGBT civil rights group is poised to make a comeback in 2012. It needs to.

Most Premature Victory Dance: Also goes to Equality Maryland for staging “celebration” events following the successful state Senate vote on marriage equality but prior to the travesty in the House of Delegates. Timing is everything. So is perception.

Most Unexpected Ally: State Sen. Allan H. Kittleman for bucking his Republican Party dogma and supporting marriage equality in Maryland. If you know him, this is not really a surprise. Thanks Senator.

Most Mercurial Delegate: Tiffany Alston of PG County angered marriage equality advocates with her antics last session. She was a co-sponsor of the bill and then changed her mind. Now, with an indictment hanging over her head and her anger concerning the governor’s redistricting plan, it will be interesting in 2012.

Biggest Topic of News: The transgender community—the failure to pass a gender identity non-discrimination bill in the 2011 General Assembly, the intense and often angry divisions among the community members, the McDonald’s beating video, the formation of a new organization and the success in securing a gender identity bill in Howard County—provided much to write and talk about.

Biggest Game Changer: Viral video of beating of trans-woman Chrissy Lee Polis at a Rosedale McDonald’s. It graphically pointed out how trans-folks are in need of protections, and hopefully the incident will open some minds.

Best at Carrying a Lucky Horseshoe: President Barack Obama. Low approval ratings, failure so far to motivate his base, economy in the dumper, no influence in Congress despite recent tax success—certain precursors to defeat, right? But look at the field of potential opponents!

A Movement Needing Motion: Occupiers with their noble cause must do more than camp out. Using the political system to realize their goals, if they are ever clarified, would be far more effective. The window may be closing.

Worst Muddling of an Issue: Homophobic extremists trying to equate pedophilia to homosexuality during the Penn State sex scandal.

Most Altruistic Organization: Brother Help Thyself raises much needed money for non-profit LGBT orgs in a slow economy. Great work and they do it every year!

Best Sports Progress: NFL, NBA and MLB for including LGBT non-discrimination provisions in their new labor agreements. C’mon NHL. Get the puck with the program!

Honorable Mention: All those who have participated in the “It Gets Better” campaign and have appeared in videos supporting same-sex marriage in New York and in Maryland. Thank you all.

Top Mindless Movie: Friends with Benefits—not exactly a blockbuster—but when you have a chiseled (and nude) Justin Timberlake and a likable gay character in the same movie, that’s all I need. If only one of the Twilight guys was gay.

Best Opening Number: Neil Patrick Harris’ “It’s Not Just For Gays Anymore” at the Tony’s was one for the ages. Sample lyric: “If you feel like someone that this world excludes, it's no longer only for dudes who like dudes. Attention every breeder, you're invited to the theatre.”

Worst Audience: Those attending GOP debates who find it in their hearts to boo an American gay soldier and urging a hypothetical uninsured coma patient to simply just go die.

Most Disappointing TV Show: Desperate Housewives in its final run. Dark plot all season about a murder and cover-up while reducing the gay couple to a pair of buffoons. Where was Andrew?

Best Gay Bar: All of them for providing a space for LGBT folks to congregate, network and socialize among ourselves without having to depend on social media for interaction. Nothing tops gay happy meetings.

Best LGBT-Friendly Theatre in Baltimore: The Spotlighters. Dependably good productions that are well-acted and directed in the tight confines of the in-the-round stage.

Best Gay-Themed Musical: La Cage aux Folles at the Hippodrome was a winner in every aspect. It was the best of times.

By the way, here's hoping you might consider adding a link to Gender Rights Maryland to your list. The best new organization of the year, right?