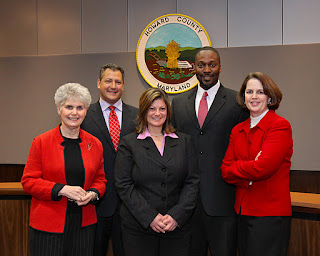 On December 5, Howard County, by a 4-1 vote in the county council, joined Baltimore City and Montgomery County as the only jurisdictions in Maryland to provide anti-discrimination protections based on gender identity and expression. The bill prohibits discrimination in the areas of housing, law enforcement, public accommodations, financing, employment, and health and social services.

County Executive Ken Ulman is expected to sign the measure, and it will take effect 60 days from then. That stroke of a pen will mean that a third of the state’s population will be covered by these protections.

The four council members who voted for the bill were Democrats Mary Kay Sigaty, Jen Terrasa, Calvin Ball (Council Chair) and Courtney Watson. Greg Fox, a Republican from Western Howard County, voted against the measure saying that the federal and state governments should pass a single law that clarifies the definition of public accommodations. The county law, as written, is vague on the definition.

Nonetheless, the council members believed that non-discrimination based on gender identity needed to be codified. “The Council felt strongly that this legislation was important not only to making discrimination based on gender identity illegal in Howard County but also to raise awareness and help bring about protections in other jurisdictions as well,” Councilwoman Courtney Watson told Baltimore OUTloud. “The experiences of a transgender student in our local high school helped reinforce the need to protect the rights of transgender citizens.”

This past summer, representatives from the Columbia/Howard County chapter of PFLAG and Gender Rights Maryland (GRMD) suggested that the council amend the current law to add gender identity and expression to the 15 other protected classes in Howard County. After consultations with GRMD and others, a bill was crafted.

On November 21, nearly 70 people attended a public hearing on the bill that included the testimony of 20 supporters and only 4 opponents. A wide range of LGBT and other progressive organizations as well as parents, relatives and transgender individuals testified on behalf of the bill.

Delegate Liz Bobo, a Democrat from Columbia, provided written testimony to back the measure. “In the 1970’s, Howard County was one of the first in the country to included gays and lesbians in our Human Rights Law. Now it is appropriate for our county to again be in the forefront on this human rights issue,” she included in her statement.

The four opponents apparently did not make a significant impact. Following the hearing, the Democratic council members who had sponsored the bill told Baltimore OUTloud that nothing was offered by the opponents that would change their minds. In fact, the testimony given in support of the bill solidified their positions. “The data demonstrated that ending the discrimination is the right thing to do,” noted Council Chairman Calvin Ball.

It was clear following the hearing that the favorable vote taken on December 5 was a virtual certainty.

Del. Bobo has been an ardent supporter of rights for the LGBT community for four decades. “This bill is needed because when any group of human beings are at risk of discrimination, we are all at risk of discrimination,” she told OUTloud. “This bill regarding gender identity is in keeping with Howard County's distinction of being one of the first counties in our entire nation to include gays and lesbians in our human rights law back in the 70's. I am so grateful to my husband, Lloyd Knowles, for having the courage to sponsor that bill so many years ago.”

She added, “I will be a co-sponsor of the statewide bill regarding gender identity again in the upcoming legislative session and am optimistic that it will pass and become law in the State of Maryland.”

Satisfied with the results in Howard County and anticipating momentum for a statewide bill, Sharon Brackett, Board Chair for Gender Rights Maryland, said in a statement: “Now, after much hard work, we have expanded protections in Howard and done so with a broad coalition of support. As a resident of Howard County I could not be prouder of my Council for taking this issue on. This event will yield great momentum in expanding these same rights throughout the state in 2012.” Gender Rights Maryland is an organization dedicated to end discrimination based on gender identity statewide.

Maryland is expected to take up a similar measure during the 2012 General Assembly. A bill that excluded “public accommodations” fell short in the Senate at the end of the 2011 session but with its passage in the House, it advanced further than ever before. Governor O’Malley pledged support during the upcoming session.

Posted by Steve Charing at 3:59 PM