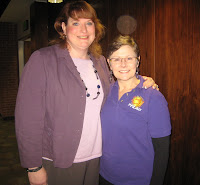 I hope you all had a wonderful Thanksgiving and survived the Black Friday insanity. As we reflect on our families, friends, ourselves and the world we live in, I want to share some thoughts as we thrust deeper into the holiday season.

The Color Purple. Baltimore Ravens fans have been donning purple in support of their team throughout the football season and especially so following the impressive victory over the San Francisco 49ers Thanksgiving night. Yet purple took on another meaning just a few days before.

Most of the 70 or so folks who attended the hearing before the Howard County Council in support of a bill that would end discrimination based on gender identity and expression in employment, housing and public accommodations were clad in purple to demonstrate unity. Twenty proponents of the bill offered solid and persuasive testimony—much of which came from transgender individuals who related personal experiences with discrimination.

When Council Chairman Calvin Ball, one of four sponsors of the bill, asked those at the hearing to rise if they supported passage of the bill, a sea of purple rose, which made a strong impression on friend and foe alike. It was gratifying to see that. The bill is a near certainty to pass on December 5th making Howard County the third jurisdiction in Maryland to offer such protections. Now “purple power” needs to be applied in 2012 to get the job done statewide.

Friendly Diamonds. While we continue to revel in the success of the Ravens, Major League Baseball and the Major League Players’ Association has given us some good news as well. They added non-discrimination protections for gay players in the new 5-year bargaining agreement. This was a result of lawyers on both sides agreeing that such protections should be in place.

“In a majority of states in our country, it is still perfectly legal to fire someone just for being gay, and 13 of the 30 Major League teams are located in those states that allow anti-gay firings,” Tico Almeida, president of Freedom to Work told the Washington Blade. “No player should have to fear harassment or workplace retaliation if he were to publicly come out as gay.”

This development means that a player cannot be terminated or face harassment should he come out as gay. The fear of harassment from teammates has always been a major impediment for a gay baseball (or any professional sport) athlete to come out. It is just a matter of time when we will welcome the first openly gay baseball player, and the reaction will be more positive than negative.

Equality Maryland’s Renaissance. Many people believed that following the disappointing 2011 General Assembly and the ugly finger-pointing that ensued, it was the end of the line for Equality Maryland, the state’s erstwhile leading LGBT civil rights organization. A majority of paid staff had been let go, with the Executive Director either having resigned or was fired depending on who you talk to. And the Chairman of the Board resigned leaving a gaping hole in the hierarchy.

But under the leadership and determination of Lisa Polyak, Patrick Wojahn, Mark Yost, Jr. and other remaining Board members, the organization did not wither on the vine. It paid down debt, put in place a new and expanded Board, and hired a new Executive Director, Carrie Evans, who is determined to restore the confidence of the community.

Although Equality Maryland will not be the sole force to achieve marriage equality and transgender protections in the upcoming legislative session, it will be a key player. Its viability and stability are crucial to pass these key initiatives.

Unfriendly Newt. Another kind of renaissance has taken place in the presidential race. Former Speaker Newt Gingrich has risen from the ashes of an earlier flame-out and has surged in the polls to become a serious contender for the Republican nomination. (Does President Obama really have that good fortune?)

In its quest to find an anti-Romney who conservatives rightly mistrust, several wannabes had emerged during the pre-primary season. Now it’s Newt’s turn to fill that void.

While all the GOP candidates are virulently anti-gay, Gingrich actually has a record of opposing rights for LGBT Americans. According to davidmixner.com, Gingrich has been an active and vocal supporter of placing an amendment banning marriage in the United States Constitution. He has called marriage equality an aberration! He supports the lawsuit by Congressional Republicans to defend DOMA. He is even opposed to domestic partnerships in private industry.

He is absolutely against adoption by same sex couples. He is against the passage of ENDA. He has personally called homosexuality a sin and should be treated as such.

Newt Gingrich would be a dangerous president if elected, especially for LGBT people. However, his reluctance until now, to lay the gloves on Mitt (The Switch) Romney will most likely allow the former Massachusetts governor to cruise to the GOP prize.

The sea of purple in Howard County was incredible to watch! If we are to pass legislation supporting same-sex marriage and to prevent horrifying discrimination against transgender people statewide, it will take the combined efforts of every LGBT organization and our allies.

I am glad that many organizations active came together to show our solidarity. To say that it was deeply touching to all involved that evening is a huge understatement. Isn't it interesting that when you show up to give something quite often you walk away with far more than gave?